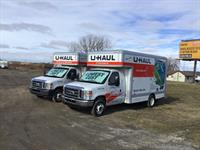 The retailer was very slow and despite I had made my check-in by internet he done this again. That costed me 30 min. delay.

physical address to drop off the truck was not the same address given during the online booking.

Terrible. On top of poor customer service they overcharged me for gas. I filled up exactly to the level i picked the truck up, but they charged my cc for extra $38 what made my trip worth $62 for 80 km. If truck uses as much gas then they have to take it to junk yard.

I was told to drop of the truck at the wrong location. Personal at the convince stor was rude. I was given directions to drop off on a... piece of paper. 21st century when gps available. I filled up truck at the gas station for $25 and left recept but was charged $37 more later. Rip off.

The location was closed. If I didn't have a smart phone wth data I could not have returned it. The address was not visible. The property should be identified by the 911 number.

John provided excellent service. I will only use the Blenheim location for my trailer rentals.

When I dropped of the truck shortly after 9 am on Tuesday, 2 May, there was a sign on the door that said they were closed but no information as to when they would be open again or where to park the truck. As directed by Rob from Dougall, I called traffic and talked to Nicole who was very helpful and said she would look after the refund and compensation for the truck not being available at Dougall.

Had no idea what he was dong rude didnt understand English

the person i dealt with owned another business and cared more about that than being helpful to me he seemed totally disinterested and extremely slow and frustrating. i would never deal there again

After U-Haul changed my pick up location, I had to go to the next town. The gentlemen at the store worked super hard to get me checked in. His computer froze so he used his phone. The trucks are on the other side of town though. Luckily I had my ride still there or else I would have had to walk for 30 minutes.

The worst customer experience I've ever had. I had already checked in online and arrived at what I thought was the pick up location. Went into the convenience store. I was confused when the gentleman working asked for my license and started asking me questions I had already answered via the online check in form. He then started to help other customers who came in after us who were buying lottery tickets. We stood there for 25 minutes before he started assisting us again. I said I had already checked in online and he told me I must not have done the paperwork properly if I was there. Little did I know, the pick up location was 3kms down the road. Not the address I was told to go to at all. I went to the pick up location down the road, and the woman at that spot told me that she didnt know someone was coming to pick up a truck. She called the gentleman at the store and gave me the phone to talk to me. He then started YELLING at me, saying I didnt do the paperwork properly or I would have the code for the lock box which would grant access to the truck. He was obviously very knowledgable about this procedure. Between this awful customer service at both locations and the U Haul app not working (as confirmed by U Haul rep on the phone) the entire process took 2 hours to pick up a truck. I would absolutely not recommend this pick up location at all.

Treat uhal customers same as store customer (I was interrupt 3 times be store customers when trying to settle bill). Insure all equipment works properly, was in store for 1/2 hour and could not get hatd copy of invoice finally gave up and left

When I rented the vehicle I was told there was half a tank of gas. It was below half. I drove the vehicle 30 miles and put $10 worth of gas in it bringing it back to under half. I was billed over $35 for gas stating this was done to return the tank to half. I was obviously overcharged!

The transaction went as expected, no issues.

The only complaint I have is that the office to fill out paperwork is at a different location to where you pick up the rental vehicle. But only a few minutes drive .

Not billed customers for two bills. Bill me once and then build me again. So I played 2 times for one rental. German was very mean and ignorant trying to rip me off I would not ever recommend anybody renting a U-Haul from Blenheim Ontario ever