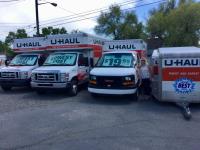 There was only one person in the store and she wasn't able to help me.

Making sure tour system works well. As in from costumer rent it to going and receiving it. Had a little mix up there.. but other then that went well.

The lady was very unprofessional, did not explain where she wanted the trailer, asked me to write the information on a sticky note as she was putting ice down her shirt to â€œstay awakeâ€. She didn't look over the trailer, didn't listen to what I had to say, and was rude. I dropped the trailer off at 2:00 on Saturday the 8th of August. Will never go to that location again.

The truck was bigger than I need but nothing smaller was available so they gave me a smaller truck price. Although, the truck itself was horrible. No cruise control, no CD player, not even a hookup to play music off of another device. The engine was very underpowered and gas mileage wasn't good at all even with my attempts to make it better. Not even a turbo charged engine like most trucks are. The only thing the truck had was good air conditioning.

Nothing the whole experience was excellent

Trailer tongue too heavy. Not enough help in site. It You're going to hurt some customer.

After hours drop off.

I just dropped the trailer off. I was surprised that they charged $5.00 cleaning.

Dropped off truck, was charged for cleaning even though I have photos That show truck was clean. Have a charge for 30.00 that isn't on my invoice and no explanation on top of my cleaning fee. Was told they would process my return later because they are too busy. Very sketchy place. I have rented probably 30+ trucks from uhaul and never had this kind of experience.

Veronica was very accommodating and friendly. Great service.. Note that she wrongly attached the trailer. She wouldn't allow us to leave the way we had attached it and she changed what did. We had rented earlier just a few weeks ago so we knew what we were doing. And, when we arrived at our drop off location, the staff they were shocked at how she had attached the trailer

Clerk did not seem to know how to rent the equipment, suggested that the person who left earlier was the one who was supposed to rent things and he didn't get paid to do the rentals, but he would do it to take care of customer. When I expressed concern that the ratchet mechanism on the tow dolly was rusted and would not spin/tighten correctly his only solution was that I unload the car, unhook the trailer and go somewhere and purchase lubricant to fix the issue. He said that normally someone does maintain the equipment. I would decline to return to this location in the future.

The transaction was quick and easy. I was in/out in 15 minutes.

This was a drop off at a Sinclair gas station, Uhaul sign is very small but drop off was very easy and employee was very nice.

Allow us to pick it up where you stay we drove several hours from where we live because the day before we were supposed to pick up we were informed he didn't have any trucks this has happened many times before apparently Wyoming and Montana aren't important enough to make sure that when you reserve a truck you get it. Then when we got there they didn't have one and we had to go to another location after waiting several hours for them to locate a truck for us if it is within my power I will never use U-Haul again very frustrated

Again, do not let employees fudge on the gas level. It pisses customers like me off.

The owners are so nice. Very accommodating. They give a very personal touch to their business. If ever needed again I will definitely recommend their store!

I completed an online reservation more than 15 days before the rental day, and they didn't have the truck that I reserved. I reserved a 20' truck, and I ended up with a 26' because it was the only truck available in Billings. I'm so disappointed, and it was unacceptable the way I was treated. The lady in charge told me over the phone in a rude way, take that truck or cancel it, it's your only option. Also, I had to pick up the moving equipment I bought/rented somewhere else. The truck was fine, but my whole experience renting the vehicle was horrible.

Keep it simple and to the point !! Dont change a thing as this is a Great little place!!

The hidden â€œrental chargeâ€ of $39.90 basically doubled my bill to $79.90 for one day. I understand charging for insurance and mileage. But the rental charge is not disclosed and it is outrageous when you advertise your rentals are only $19.95 per day.

I received a bill the day after I dropped off the truck. It was in clean condition but not inspected to confirm as much. It was returned on time but the young lady said the owner wouldn't be inspecting it or doing anything with it till Monday morning. I called about the additional charges gave my information to the employee on duty. I expect that if it isn't put into the computer as being returned today I will be expecting another bill for an additional overage. I am not impressed by this and hope all of this will be handled in a prompt manner I expect a callback from the dealer and/or Uhaul soon to assure me this matter has been resolved. Respectfully Kevin

Dropoff location: Unless the person leasing a unit has experience backing the equipment into very tight spots, no. The lot is far too small.