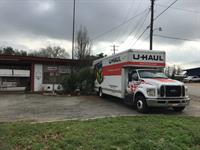 Saved me from spending another night out of town. I was stranded with my car broken down in a small town. No Uber no taxi. Did everything on smartphone. Was able to pick up my product and get home safely. Can't believe how much the contactless service saved me and my son from a difficult situation. I have been telling everyone about your non contract service. I thank you for this great technology. It helped me greatly.

Gary, U haul representative in Bellville, Tx was going out of town and stated we could pick up the 20 ft. truck on Thursday and he would not charge us. This was to be done in order for the people who were helping us would be able to come Friday morning to help us. When I look to see why what we were charged did not concurred with what we figure. then I saw why, he had charged us for Thursday which he said he wouldn't do. Since we agree to that. We were concern, but took this man at his word. He did charge us for THURSDAY!!! SHAME ON HIM! We were also wanting an itemize statement on charges for each day, charge for truck, trolley and miles. We did figure out how many miles we did travel to apartment and to our storage units,but haven't found such a statement.

I did not see anyone there. It appeared to be closed. Did not talk to anyone on site.

We schedule pick-up at the desk for 10am..when they opened. We got there nobody was there. Called them..they said they'd be at least 30-40min because they don't open till 10am. Mind you it's now 10:07am. We waited. They finally call us at about 11am and re-do our reservation so they can give us the box code to the keys OVER THE PHONE. They gave us all our information including where to drop off the truck OVER THE PHONE. Resulting in sending us to a drop off location that no longer took U-hauls. which lead to us having to pay mileage overage. HORRIBLE HORRIBLE HORRIBLE experience.

Nothing. It was perfect

The truck was great and the agent was helpful in the rental. However, the rental price and insurance I was charged was not the same as the contract and I still cannot get this straightened out. I've had no help from the Savemore business and still waiting to hear from U-haul. So I'm very frustrated and just want this fixed. It is Savemore's responsibility and they are pushing me off.

i ordered a 15 foot truck, appliance dolly, regular dolly and moving blankets online, but when we got to our house that we were packing, only an appliance dolly was in the truck. we really needed the moving blankets the most and not having them made the move very difficult. the uhaul contact person that was listed on my reservation didnt answer her phone when i called to try to report the missing moving blankets and dolly issue. even though i needed to be packing and moving stuff, i called the 1800# for uhaul, but after waiting 10 minutes on hold for a representative, i had to hang up and finish packing and moving items and hoped i could report the issue later. when we returned the truck after 10pm, i called again and was able to reach the uhaul 1800# representatives who noted the missing moving accessories. i just feel like i shouldn't have been able to reserve items online if they werent available. also, the place i rented from didn't open until noon, and that just seems really inaccessible and difficult for customers. i also had to drive many miles out of the way to purchase boxes from another uhaul dealer. i hope i will get my refund back asap for the blankets and standard dolly that weren't included. overall, the truck worked well and got our items moved, but there were errors and stressors here that could have been avoided.

This is the second time I drop off at this location. The staff are very helpful and friendly.

Did not return phone calls. I felt hurried through the pick-up process. The brakes on the trailer did not work.

Rural location. Wasn't open when I arrived, but phone number clearly posted on window & my call was returned promptly. Got the trailer rented WAY faster than I was able to return it in Houston!!!

Poor customer service.....computer problems, took over 1 hr to complete this pick-up. Very disappointed in the service. Did not inspect cargo trailer or my hook-up prior to me leaving property.

The truck had just arrived, so they weren't ready for me even though I was 30 minutes past my appointment time. They did hustle and get me on my way as soon as they could.

Keep up the goid work

This was simply a drop off location for me. When I called the next morning, the man who answered did not know what I was talking about. Hope the trailer was there!

There were issues with getting my contract printed out, but that was not their problem, apparently it was your website's issue. They texted me the contract. the first charge on my Citicard was a problem, Uhaul rep said there wasn't enough to cover the charge. This was incorrect. The charge still shows "pending" on my citicard and will need to be credited, if not already. the second charge went on my Discover card, and it went through. please make sure i will only be charged one time.

My reservation was not correct. I had reserved a 20' truck but reservation had me down for 17' truck. I couldn't fit my 3 bedroom house in truck. Had to make another trip in my personal truck and trailer to finish job. Cost me extra money to finish. Also charged me extra miles. Reservation should of had me pick up truck closer to my house. I would like compensation for this. Website was also not working correctly so that was an additional delay of almost an hour.

Seller left and was not there when he knew we were on our way. He also did not help hook up trailer and it did not have all parts needed.

Uhaul has lry me fown twice, not the location. I can never get the size truck I requested 2 weeks in a row now. Noy using the company anymore

Check out time could be recorded accurately

The people who run this show are idiots. They didn't know how to work the computer. They gave me a dirty truck with 1/4 tank of gas. I ordered a dozen moving blankets and they kept on trying to give me only 6. DO NOT GO HERE.

There is no U-Haul Drop Box or sign indicating to use the door mail drop door. The U-Haul website details a drop site on 141 N. FM 2429 Bellville, TX; this location is someone's home and not a location! Also there are 3 other locations detailed with "Bellville" a the city and these are in other towns.

very satisfied with the service at this location. friendly