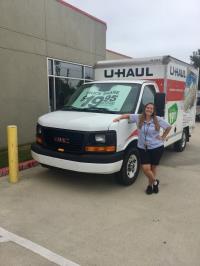 Representative needs to know procedure/steps. How to guide customer for car placement onto dolly and placement of straps and chains.

Rep was very friendly and courteous

Drop off location was great.

Customer service was amazing nice respectful gave great directions from one facility to the other. I tip my hat to both of them. They get a 20 from me on a scale of 1-10 with 10 being good. 20 amazing

Mr Morgan was the rudest person I have ever met.

The manager is rude. It seems like that is just his personality. I didn't receive a text until five minutes after I was inside trying to figure out how to complete my online reservation that I did two days prior. I already did the online checkin. Instead of helping me with the online, he rudely said how easy the online process is and that he would just do it. Really?? Wow. No the online was not easy. Since I didn't receive my text until five minutes after I arrived, the process was not easy. In my opinion, instead of the manager - Mr. Brown, making me feel stupid, he could have used different language to help. In his position, if he cannot do that, he doesn't need to be working there. The van had someone else's trash In it. It also had some red kool-aid type mess in cup holder. I will never be back to that location. Thing is I didn't pick it either. I received a call from U-Haul telling me I needed to use that location because they had the truck I needed. Well, no thank you.

Trailer lights on the car transport were burned out and the tail light lens and cover on the back of the tail light are riveted. The dealer said just the signal portion of the bulb was not working. The entire bulb was burnt out. He did not seem very concerned about safety. There was three other trailers that could have been used but he said they weren't for my 2012 Ford Fusion. I have been towing trailers of various sizes up to 40' gooseneck trailers for 42 years. The trailers that were there would have worked. I don't think the trailer he gave me was for my car. Part of the rear end of the car was extending beyond the trailer ramps of the trailer. The last time I rented a trailer from my usual location on North Main Street, Baytown Tx. The entire car was on the trailer with no part of my car extending past the trailer ramps.

Guy was hard of hearing and keys were misplaced

I recommend this Uhaul facility

The s hook on the safety chain for the vehicle that was in tow became unhooked in transit of vehicle. The S hook is really to small for the chain that it is attached.

There was some trash in the truck when I got it. Both in the cargo space and in the cab. Not a big deal but would be nice to have that cleaned. Other than that the pickup location was great. Got my sorted out and on my way quickly.

The manager was kinda rude and they didn't have any pads.

Had to wait 1.5 just to pick up my rental. When loading transport, ball joint popped off of tow while my wife was in the car that we were transporting. This means the employee incorrectly hooked up transport.

Very respectful and real quick on getting things done. Thanks

Was told that a flat rate would keep me from having to pay mileage. I was charged another $78.95 for mileage when returning vehicle. I was not told that phone renting truck. I didn't need the truck the extra day so returned it a day ahead of schedule and was not given a refund. Poor service and poor explanation of how I was going to end of paying the mileage anyway. Not a happy customer.

I entered all my info online and prechecked in so i wouldn't have to go in but when I got there they told me I had to go into the store... the dolly inhad reserved was unavailable ...the truck they gave me was empty of fuel and they didnt give me a credit that would cover a tank of gas ....so I had to put a whole tank of gas in the truck of which I got no credit for on return...so I lost 25.00 on this whole thing...then when I get into the truck is was filthy with stains and debris all over the floor...it was a horrible experience...I will not use uhaul again

Nothing, the agent was professional, answered all my questions, was able to provide the necessary vehicle and got me out and on the road quickly. The check-in was pain free, easy, and quick too. Thank you for a great rental experience, I would definitely recommend this business if you need a vehicle. I had not reserved a truck and was on the road in under 30 minutes. Thank you!

I returned the trailer on Sunday 2hrs before it was due. The location was closed so I dropped the trailer in the location where I picked it up. I did not know about the digital return and did not receive a notice for this until after the due back time. I immediately called the location and spoke to the manager to inform him that the trailer had been returned over 2hrs earlier. He assured me that he would check it in on time so I would not be charged an extra day. When my invoice showed up I was charged for an additional day since he did not do what he said. I will not use this location again!

The cab of the truck smelled like fish and had dog food inside.

I called the one closest location to me and he had to refer me to a location a few miles further - but all was ready and done very quickly - great computer system you use!!!