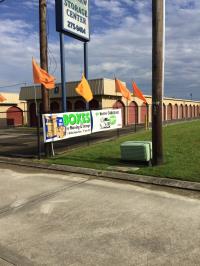 Be on time for appointments

The customer service was great, Valerie went above and beyond. I will recommend the store to all my friends and family.

Better knowledge of the process of the equipment

The young lady completing the contract/paperwork was OUTSTANDING !!!! Very personable, polite and knowledgeable. The location was in a very seedy part of town, and NOT my chosen pick up point. Also note: truck was very nice, easy to drive and smooth riding.

They were very polite and helpful.

The lady was great!! Great customer service skills. Went out her way to call me back when a truck became available. Saved my life! Thanks!

Check in for the U-Haul was the best I've ever experienced at a UHaul location. Everyone was very nice and welcoming. They made sure that we were prepared for our move and made sure that the trailer was attached properly and that all of the lights worked. Both people were extremely nice and helped get our move off to a great start.

The Airline location called and told me that the truck I was scheduled to rent was wreck by its previous renter. I was told they would give me a call back once they found one. My reservation was for 10am they called me at 9:30. I never received a call back at 10: 30 I called Florida Blvd location and the guy searched and found u haul on Richcroft for me. Both men at Richcroft and Forida Blvd were extremely nice and help resolve my issue. However I will never recommend Airline location to anyone.

Nothing needed improvement based on my experience. Great job!

enclosed trailer had leak, bad weather, my stuff got wet

The woman working at this location, Jackie, was extremely sweet and helpful! However I was initially supposed to pick the uhaul up in Jackson La, online it said there were trucks available at that location and I received several emails confirming the reservation. Two days before my move I received a call saying the truck wasn't available at that location and I had to drive to Baton Rouge to pick it up. This was extremely inconvenient for me because all of my things that needed to be moved were in Jackson and I had other people helping me with the move that had their own plans that shouldn't have involved driving to Baton Rouge just to come back to Jackson, also I had work that day. So I had done my part and made a reservation for a truck for my move and I relied on you guys to do to do your job since everything was confirmed and then plans were changed on me last minute, which increased the mileage and increased the overall price. When I talked to Josh (office # +1 (504) 245-1282) over the phone about the issue he offered a discount and said I would only pay $100 even and wouldn't have any additional charges. And I was satisfied with that. So the next day when I picked the truck up, Jackie the woman working at the storage center wasn't informed any about the discount so we called up Josh. While talking to him he completely took the discount back and blamed it on taxes leaving my total at $130, which was my total before his discount, leaving me with no discount. And $30 tax on $100 or even $130 would mean 26-30% tax, I'm 100% certain the tax rates for Louisiana aren't 26-30%, besides that he had previously assured me that I would only pay $100 even despite the additional charges, as a discount for messing up my reservation. Also, he was extremely rude and unprofessional while we were on the phone at the storage center- he questioned my financial status by saying "well what's another $30 anyways, you're already paying $100," and then he proceeded to argue with me and finally hung up on me in the middle of our conversation, mind you, I'm the customer here. Jackie, the woman working at the storage center even said he is consistently rude with costumers and there are often times several complaints comcerning his unprofessional behavior. Having him end our conversation I decided to leave with the truck because I had to seriously rush to get back to my job. Before I left Jackie gave me an address for where I would drop the truck off, in addition to that two people called me confirming the address and I received another confirmation email. So the next day I dropped the truck off at that specific address around noon and later that day I received an email with a receipt charging me an additional $60 claiming it to be a "wrong destination fee" even though I was told several times the drop off location and received an email confirming it. My overall experience was very poor, your job as Uhaul should be to help with people moving and make it run more smoothly

Nine foot cargo van was a great piece of equipment that was in excellent shape when rented. The person I dealt with was easy to work with.

Ms Jackie has excellent customer service and a great personality, I will recommend this location to everyone.

I was told to bring it back by 5:30pm on Saturday. When we brought the truck back in the morning, I was charged extra because we were told it should have been back before 9am.

Jackie was awesome!!! Thanks so much!

The computer system went down in the middle of my checkout. Jackie was a complete professional and worked with the IT staff to get the system back online and me into the van I needed. I will be using this location again! thanks

Ms. Jackie was so pleasant to do business with. She got us a uhaul without a reservation. She also rented us twelve blankets. Ms. Jackie is a treasure and I'm glad you found her.

Richcroft is an excellent location to rent from also the staff is welcoming & friendly.

Everything worked out perfect

Office manager was very customer friendly and polite and I love respect...thank you for being you!

Maybe make sure the cockpit of the car is clean.