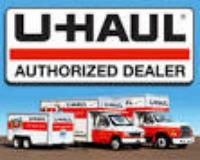 You can take the fuel and cleaning right off my bill now, because I'm not paying it. This vehicle was absolutely filthy when I picked it up. Which, by the way, took over an hour to accomplish. By 12.00 no one was in the office. I was on the phone forever trying to get the keys. It was freezing, windy and starting to rain. I had no where to go to get out of the weather The seats were disgustingly dirty and made me cringe to get in it. It stank and I wore a mask the whole tome I was driving it. When I dropped it off, don't you dare try to talk me that anyone cleaned it, because, once again not a soul in sight. I put gas in it up to the level it was when I picked it up This is nothing but a rip off and that location is a dumpy old house with cardboard in the windows. Never again !!!!!

the van was dirty, and the lock code was unavailable online - had to call U-Haul and wait 30 minutes until the problem was fixed!

On your website, we were given the choice between doing an online pick up or with a u-haul attendant. I choose u-haul attendant however when we reached the location, it's a mobile only location. We then spent 40 minutes sitting there mainly on hold trying to get it resolved so we could get our rental. The option for in person pick up shouldn't have been available for this location. It was very disappointing.

The vehicle was super nasty, dirty and disgusting, it had a smell like poop of cow, not really sure what kind of things did a past customer put in the vehicle but it was terrible, on top of that they upcharged me for no reason

I was scared at this location. Only truck on site. Lock on back of truck was cut off and laying on ground. I put it inside cab. I called when dropping off for instructions and they (U-Haul) told me to put keys on back off truck because there is no drop box. I was scared to do that. Anyone could take the truck. I was also last minute told to go to 2 different locations to get truck. Very bad service. Truck gas and mileage was wrong as well. I got my move done but nerves shattered after the business. I always rent from Queensway in Toronto and always good service . Shut down Tiffin st in Barrie. Joe Weidinger 4166295532

All the info I gave online seemed tio be lost. The computer was very slow. The truck could've at least been swept out. The passenger door really needed to be slammed to close.

The agent was pleasant to deal with.

I was forced to drive over 120klm to pickup truck. They called me when I was almost there and told me to pickup tomorrow instead? I said no! He said that the truck was at a Garage and was towed out of a snow bank. I went there and (very scary and very dirty place), waited 15 minutes while he texted someone and didn't even put his head up to acknowledge me. He then said I had to follow him to pick up truck. I asked where the blankets I rented are? He didn't have any. He said I had to go to another uHaul in Barrie to get them (with the 26ft truck!!). Spent most of evening running around and then had to drive truck another 120klm to my house? On top of all this, I was first directed to a U-Haul that doesn't sell U-Haul any longer? That caused us to spend several hours and 4 redirected phone calls to find a person who would credit us for all the material we bought, but couldn't get it from an owner U-Haul location because they had no record of it? The only thing that worked well is the two workers hired to assist in loading the truck. The truck itself was very old and there was hard ice and snow packed into wheel well that caused truck to vibrate terrible. I cleaned it out and it was better. I am completely exhausted about this experience?

Absolute mess guys are unprofessional couldn't find my reservation online. I have a fuel charge of 85$ there was 3/4 of a tank of gas in it when I got it and 3/4 when I dropped it off mileage is also off. The office smelled like alcohol it was disgusting like 8 people crammed in this little space all waiting took an hour to get the keys these guys are scam artists and I'll be reporting this to the better business burea. Because I'm of this I will never rent from u haul again clearly not a trusted business

1. They made me go to a different location because they got the reservation mixed up. Once there.. the uhaul location was closed. 2. When I returned to original location they said there was no more trucks available even though I reserved a truck. 3. Finally got a truck after 2 hours, gas was almost empty. 4. Over charged me for milage and when I came back in once I returned the truck they didnt have any money to reimburse me.. one of the workers went out to get cash and he did not return for a long period of time. 5. Charged me after hours return fee even though I filled out all the online forms so I wouldnt be charged Absolute joke of a professional establishment So unorganized. I will NEVER be using UHAUL again and neither will my family. Had to pay movers to sit around for 3 hours when we tried to figure out the rental truck. Terrible customer service at this establishment, truly disappointing.

It takes forever to get the unit

Building and location is in poor condition

Long wait when picking up truck. Could not do as they ask when returned truck. Unable to get online. However, no extra charges were on final bill so overall I will say it went ok. You definitely need to have patience!!!!

Couldn't get mobile pickup to work or drop off spent hours on the phone trying to resolve the issues. The person was late getting to work and was an hour after scheduled appointment said he knew the night before that the truck was out and couldn't be picked up yet both location and head office knew that but no communication to the customer. Very poor business practices.

The truck cab was dirty, the dealer is located at 45 Bradford St. Not 53 Bradford St. I received an email stating that my reservation was confirmed and guaranteed. When I arrived, there was no appliance dolly, no furniture pads and no trailer. Because of this, I will need to make another trip. I want some serious compensation for this issue.

Service was amazing, my first time renting and Ola walked me through everything and the after hours drop off was so easy to do. Thx Ola

Friendly and accommodating staff. Premises dirty, poorly maintained and way below par for a typical U Haul outlet. The computer was painfully slow - had to be "refreshed" constantly ....needs to be replaced? up-dated? but anyway you look at it NOT acceptable for a business these days.

Make sure there is gas in the vehicle.

Not the locations fault but U-Haul corporate. There is a very clear gap in communication between locations and with the online u haul booking system. It puts locations in a very difficult position and frankly it is unacceptable. UHaul corporate you need to get your shit together and invest in the over hauling your system. It's embarrassing and I will avoid renting from U-Haul at all costs.

We had to wait 2 hours after our pickup time to just drive our vehicle because U-haul's app was broken. There was no one to help us including U-haul itself. The truck was terrible to start. No Dolly included even though I paid for it. Gas was on empty when I picked it up and I barely got to a gas station.

Our pickup of the trailer was a lengthy process but the girl was very friendly. The return the next day was an experience in its self I had put the deposit for the trailer on my debit card but when we returned trailer the workers had no clue what was going on then one of the employees asked my husband to follow him downtown to go to the bank so he could get cash to refund the deposit they never came out so see the return of the trailer or look it over and all employees st this location really had no clue what was going on this whole return took over 2 hours to complete we even had to threaten to call the police because for the refund of the deposit very shady place employee finally agreed to refund deposit and ot was completed through an etransfer would not recommend to anyone