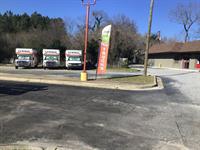 Confusing as to where to drop off.

I reserved a cargo van to help my son move furniture I am giving him because I'm moving out of state on Wednesday. I have a to do list as long as my arm and this was just one of the tasks I scheduled for Sunday. My experience w/U-Haul horrible and I doubt I'll rent from you again without some consideration. Here's the story. We wanted to start in the morning; however, when we made our reservation the earliest available pick up time was 1:30... so, we shifted our day around to accommodate a later start time. We arrived to pick up our cargo van and waited over 30 minutes only to be told that U-Haul had "over-booked" and there were no available vehicles. However - lucky us - there was a van available at a location about 5 miles away (in the opposite direction from where we were going incidentally). When we arrived at the other location (actually a laundromat) we were confused because there didn't appear to be anyone from U-Haul there. Eventually, we discovered that the guy running the laundromat also was the U-Haul rental agent; however, he was having a difficult time checking out the gentleman who had just returned the van we rented. We waited and waited and waited... in total we waited another 90 minutes!!! In total we burned over two hours because U-Haul didn't have its act together. The van was O.K. The passenger door was broken which made our move a bit more difficult but we were able to get it done. When we returned the vehicle, again he couldn't get the system to work and told me I needed to go on-line and figure out how to check myself out. I pushed back and he ultimately agreed to do his job and check us out. I had thought about spending a bit more and renting from Enterprise and apparently, that's what I should have done... not sure how you can stay in business with such terrible customer service.

Dolly rental was not in truck upon pickup and when I called billing they said they would refund but they didn't. Also could not get access to Key upon arrival. Attendant was gone and came back 45 minutes later and gave me the key.

The process was so difficult and drawn out I had to go inside and the manager had to check me in and then the rented dollly want even on the truck already I would of had to go in and ask for it. It was a mess

I reserved a 10 foot truck and when I got there it wasn't there because it was in Minnesota. But the system let me book it online. This had me late for my moving day today and I have to settle for a cargo van which did it hold everything that I needed. I would like some compensation for this.

Your service was awesome, it is to hard for the average person to get in the app. To be able to lease your vehicle. The young ladys at that location deserves great recognition for their time and effort for helping your customers. Thanks for your great service

I requested two hand trucks and two furniture dollies and none were in my truck when I picked it up. This store is also in a rough part of town.

The online process for checking in needs to be improved. The process is too long and the staff was not properly trained to do it manually. I waited an hour for a process that should have 9nly taken 10 to 15 minutes.

The female owner, though knowing I was a friend of one of her "friends" was the epitome of no customer. Her attitude stunk! She needs to understand her main job is dirty laundry as the Uhaul rental is in her laundromat. She conducted herself as a librarian in the Library of Congress. So ridiculous!!!

They are not knowledgeable about anything. They should not be in service. Non of the reps can verify or help you when the online check in is not working. Terrible poor

Charged my card without my permission

Communication and better customer service, I was treated poorly and felt unwanted, and I got charged for 2 days, my reservations was at 10:45 for 3 hours, they had so much unprofessional things going on I didnt get to pull out till almost 1 o'clock, so I called and ask the on duty associate if I changed my time from 3 hours and just bring it back in the am would the price change she clearly said no, as long as I bring back in 24 hours no additional charges when I brought it back well before 24 hours, I was charged for 2 days and the next day associate was so rude and cussing complaining about how she couldn't stand the weekend associate etc.. telling me she dont give a fuck how the truck look. Just extremely unprofessional and I would never use uhaul service again.

I did not receive the dolly I asked for. It was difficult to figure out who was in charge of the trucks.

I had to drive 30 minutes from my home and there was no truck when I got to the location I was told. Luckily I stopped at a nearby location, and got a truck someone had randomly dropped off. Marlena. at the Laundry Center made a terrible situation OK, though I had to drive a 20 foot truck And I wanted a 15 foot. Stressful!!

DeDe was wonderful l, she really made this experience quick and easy!

In a bad neighborhood

I rented a truck for 24 hours with a p/u time of 3:00 P.M. The truck did not arrive until 4:45 P.M. The rep and the manager were not in the same page at all and the rep had to call the manager. After a while the rep let me just take the truckâ€”no deposit, no inspection. At 11:30 the next day the rep from this location began calling me to see when I was going to return the truck because they had already rented it to someone else before my 24 hours were up. When I returned the truck she HS billed me for 2 days and had a terrible time of refiguring the bill. I would never use this location.

Dede was fantastic to deal with at the pickup location. Very helpful. The booking process (website) was very annoying. I chose a location and then it got switched on me TWICE. The new pickup location added an hour to my travel time.

THEY PUT 3 INCORRECT CHARGES ON MY CREDIT CARD. THEY CHARGED ME FOR EQUIPMENT THEY I NEVER GOT AND THEY DID NOT HAVE THE CORRECT SIZE TRUCK WHICH WAD A HUGE INCONVENIENCE. AS A RESULT OF BEING FORCED TO USE A SMALLER TRUCK I HAD TO MAKE MORE TRIPS MOVING WHICH CAUSED ME TO USE MORE GAS AND DRIVE MORE MILES. I DON' T LIKE THAT.

Get people who know what they doing.