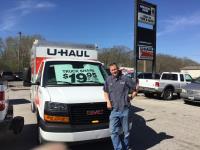 This review is more an indictment of the UHaul setup than it is of this facility. We had to pick the truck up electronically by using the phone. Only time that I have ever had to try to do that, and last time that I would. Worst experience that I have EVER had dealing with Uhaul in almost 50 years.System didn't work, so had to call Uhaul twice since I got cut off the 1st time. After almost an hour and 15 minutes, they finally were able to get things done on their end and then tell us on the phone what we needed to get the truck picked up. When we finally were able to get it, I got in, shut the door and immediately took a shower. The arm rest on the door was filled with water. Ridiculous. I will be having a little chat with them tomorrow over the phone.

Lot it was parked gentlemen working there was very nice. U-Haul spokesperson that's I spoke with and he spoke with we're both very rude and unprofessional. They require 3 verification of people a drop of blood and first born child before they will give you code to vehicle. Wasted an hour standing in parking lot for the person on phone to tell me to check with business owner. Won't use U-Haul again I'll just rent a pickup from Home Depot or Lowe's.

Check in person seemed disturbed that I returned to this location. Complained that because I did not have the optional insurance waivers he wasn't making any money. I received an e-mail the next day that I had not returned the vehicle which was not true.

Rented a 5'x8' cargo trailer for 4 days. No problems with the mechanical aspect of the trailer. The one thing I would recommend to Uhaul is to put useable tie-downs on the sides. There were slots in the rub rails to tie to, but you can't just attach a ratcheting strap to theM directly. You have to make an anchor point out of rope or wire, but the rope can't be super-sturdy rope. It has to be less than approximately 1/4â€ to fit through the slots. There are two anchor rings on each side, one in the very front on each side, and one in the very back on each side. There was nothing in the middle. Overall, I found it difficult to properly secure my items, and they slid/bounced around more than desired.

I would recommend Gann Automotive for uhaul rental. The guys are super well mannered, clean, very spoken, polite, clean shaven, not to mention their boyish good looks and charm. The place is clean, organized, and clearly ran by professionals. I received my equipment in clean and perfect condition. It was a fast transaction and I was in and out on my way down the road I actually started to miss Mr. Gann even though I had just met him.

I was charged for a furniture dolly that the dealer didn't have and I was charged for three blankets that I cut the plastic tie, but didn't use the blankets because my friends brought some they already have. Also, I reserved early so I wouldn't have to be held up on moving day, but after several disconnections and an hour later, I was able to arrive at the moving site where my helpers was just about to leave. But, all in all it got the job done.

Great location and trailer was what we needed

Trailer has no way to lock onto the ball/hitch for security. It also did not have any kind of wheel or block to leave standing on it's own while off the vehicle. I loaded it the night before and stored in my garage for security. I had to use a floor jack and stands to hold it up without it on the hitch.

My reservation was moved to this location last minute which was further away than I wanted. I spoke to the owner the day before and he said there was a family emergency and would be closing early but someone would be there for us. We arrived around 830 after calling multiple times with no answer. We were forced to hookup the trailer and complete the incomplete order online and by calling customer service the following day. We did this in good faith. This is the 2nd time since mid February that we've had a similar experience with uhaul in the St. Louis area and for what I'm charged for me doing all the work is ridiculous. If any other company would allow just the auto transport rental I'll be choosing them next time unless uhaul makes this right.

Truck had no AC and was a piece of crap. This is a uhaul problem not the rental location.

I had to drive approximately 20 miles from my preferred location to pick up the trailer. I would have liked to pick it up closer to my home. However, the folks at Gann were very helpful and polite.

have the person be there on time, I had to call customer service and hold for 30 minutes so they could get in touch with the man running it, there was no walk around done, he had several people waiting on him, inside there were empty beer cans. so to improve get reliable people to do your rentals

I was the only customer and it took very long to be checked out as the clerk (who was a nice guy) took personal calls, cursed, drank beer and was generally slow. The counter had keys and contracts everywhere.The equipment was clean and functional. I was worried about the return as the trailers were lined up along a less traveled road where anyone could easily hook up and drive away,

The passenger side ratchet strap keep breaking loosing during the ride home. It would not hold a tight grip causing me to pull over every 20 minutes to tighten it down with broken equipment. Not at all enjoyable and very stressful. In addition I be asking for a full refund for this transaction. Very unhappy customer.

The reason I gave them an average on location is because they are currently in the middle of remodeling. The gentleman that rented to me was excellent in fast, efficient and knowledgeable service.

Nothing, very courteous. Excellent customer service. Will definitely be returning to this same location to rent another U-Haul in the future.

I had rented this through Harold'd Auto Repair in Pevely, Mo to be picked up at 1:00 pm on 5/17/18 at A1 Storage in Imperial. Upon arrival the place was locked up and stated not returning until 2:00 pm. Harold had to find another trailer at Gann. The entire process put me 1 and 1/2 hours behind scheduled trip. You need to take the U-Haul franchise from A-! if they don't want to service it.

Mr. Gann is not only helpful, he is good looking and would make a fine husband to anyone.

I rented a car dolly and have never used one before. They tried giving me a dolly with a strap that was over half ripped I refused so after going back and forth a few times they switched the strap with another one. They never checked the lights on it which did not function properly. And never showed me anything on how to properly strap the vehicle down or where to put the safety chains. It took close to 2 hrs to pick it up and in between the vulgar comments and drinking beer they are far from professional. I figured U-haul would have higher standards

Overall they're great. Close to those in the immediate area, however not being an actual dealer they're not able to park larger tucks in their lot.

I had to hook up and remove tow dolly myself.