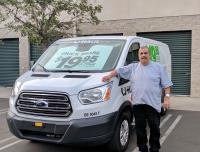 The staff was super friendly and made me feel like a valued customer in the way that I was treated by the young lady who helped me with the rental to the young man who showed us to our rental.

If I could give NO STARS, I would. I booked a 15' moving truck online the day before and opted for an 8a pickup. I called right after to the storage place (during business hours) to confirm that the order was received as well as the equipment I requested (an appliance dolly and a furniture dolly). The girl on the phone Said she saw the order and commented that it would â€œbe easierâ€ if I came at 930a when they were there to assist me. I thanked her, but declined. I explained that I needed to start this moving process as soon as possible. The girl then told me I would be receiving a code â€œvery soonâ€ that I would use to unlock the locker that houses the keys for the truck. The code never came. I called the U-Haul customer service number because I was concerned. The representative on the phone informed me that I would not receive that code until tomorrow when I was literally in the parking lot to pick up the truck. At that point, I would log in to the U-Haul account and the code would arrive. After taking a Lyft to the location, I arrived at 8:15a for my 8a pickup. Upon arriving, I saw the truck along with a homeless person sleeping there too, but noticed that the rear roll up door was open and that the equipment I had requested was not there either (just an empty truck). I was furious, but had to go because I had people waiting for me to get the move process started. I logged into the account, I got the code/combination for the lock, but it wasn't unlocking the lock on the locker. I call the customer service number and they apologized for my trouble. They tried to get a hold of someone who worked there but could not find anyone. The girl said they were going to have to locate the truck at another location and I'd have to go get it! I explained that I did not have a way to get there and that this was unacceptable. An hour passed, and the woman on the phone recommended I just wait until 930a when they arrived. It was 9:15a at this point. As an appeasement, she offered me $50 off my contract. She should've given me this rental for free as far as I was concerned at this point. The attendant arrived and was very nice and was obviously horrified that the girl I spoke to the night before had completely messed up. He couldn't get the lock off because she put it on wrong!!!! The guy was really nice and loaded the appliance dolly I requested, but informed me that they didn't have the furniture dolly. He let me take blankets tho which I did need. So after all that, I left at 10a with my truck. The final straw was when one of the people helping me move got into the passenger side of the truck, and there was a piece of a crack pipe with some crystal meth burnt on it. I was disgusted and couldn't believe that this experience kept getting worse. I will NEVER pick up a truck here again. I have booked trucks before with absolutely not issues, but not this time. AWFUL!!

Great service. Very professional. I felt safe looking at everyone with gloves and mask. Also, a cleaning crew cleaning chairs and other stuff around the place. In this current situation that extra effort is very much appreciated. I would definitely go back if I have to rent something.

For me the manager and the lady attend me where very professional and help me with all my questions. Of course I recommend Arleta Self Store for rent UHAUL track rent

Upon return, the desk associate was rude and didn't seem to care when I told him the vehicle overheated. It was as robotic an interaction with a human being as speaking to a machine for customer service, anywhere. The truck was dirty and there were unaccounted for dents and dings that I felt I needed to document due to how dusty the truck was. Aside from the face maintenance on the vehicle, it over heated, worsening significantly the gas mileage. I filled it to what was 3/8 full, and the associate, immediately after saying he'd adjust it, closes it out and charges my card an extra 13 dollars for "EZ fuel" and them claims there is nothing he can do now, it's already charged. It was not his idea to call whomever it was he called at uhaul, it was mine. He was content just robotically throwing his hands up. Iij am now not surprised that on the day I picked up the truck, there was a very dissatisfied customer already in the office, cursing having decided to go with that location. I am very dissatisfied with this experience. An associate at uhaul, spoke with me and assured me I would be receiving a refund for said "EZ fuel". I have yet to see that.

Firstly, the price of $19.95 plus fuel cost $1.09/mile looks very reasonable. However, this was not true as I was charged separately for fuel. Secondly, the truck was not cleaned. Although it was minor since these were only small pieces of trash such as a used pen and other small pieces of trash, the lady thought I was the one who caused it. I just told her it was there when I picked up the truck. I only used the track to transfer a bed & sofa and travelled a total of 16 miles . Lastly, the lady who assisted me took too much time processing my return of the truck as she was teaching a trainee how to do it which caused me significant time wasted in waiting.

It seems excessive to charge an entire day for having to be a couple of hours late. It was not by choice. I am a single parent with physical limitations. Unfortunately I had to do the move with just my child to help. Other than that. I have to say that all the people associated with your brand were very professional . I only wish that it were your policy to treat people less like a transaction and more like people. I have always choosen U-Haul in the past. I have a picture of my child as a infant sitting in a U-Haul truck 8 years ago. For some reason today's move left me feeling like I was gauged. I realize anything I say here will probably not change anything. and your policy will remain the same. This saddens me! It is getting harder and harder to be, for most folks all around. Big companies forget that we are people and not walking dollar bills.

Ask which exit you should take once you are in the rental vehicle. I had to call the office to allow me out of the alternate exit.

The representative from Arleta Storage had no idea how to explain the insurance coverages and seemed reluctant to help me understand the terms. He was impatient while I was reading over everything I was signing and told me the fuel tank was full when it was only 3/4 full. I don't think Arleta Storage is a good representative of U-Haul because of this. Finally, I'm really upset about him lying about the fuel tank. Upon return of the truck, I truly filled it up to â€œfullâ€ and realized, the truck was given to me at only 3/4 of a tank. I'm really upset about this.

Guy at the front desk was really not helpful and felt like no customer service was given. We had to ask all the questions twice because he was not clear every first time. Seemed annoyed to even answer in the first place.

Everything about this location was great, the young woman who helped me was very friendly and helpful. There was an empty beer can in the cab under the seats that we found when cleaning put the truck before dropping it off though, and that's a real potential liability for me as a driver.

The person who helped me was extremely helpful!

The owner is very kind and helpful. I will go here for all my truck needs in the future and I rent trucks fairly often for business.

When asking additional.days they should explain time of return so u don't get charged extra

The staff here is completely rude and unprofessional. They gave me mixed information after calling 3x to make sure there would be no issues the day of pickup but of course issues occurred. The male staff had a very bad attitude problem and spoke to me as if I was the problem. Never will I rent from here again, nor would I EVER refer anyone to this location.

When I booked on-line, I was told to pick up my truck from this location at 8am. When I arrived, I learned that the location wasn't open until 9:30am. Called Uhaul for assistance, was asked why I booked at a location that wasn't open until later (which wasn't my choice), and then was told that nothing was available for a 30 mile radius. I kept the appointment, since I had no other choice, and was told that the location manager should have set up a lock box and access code for me since my appointment was early (which they didn't do). When I returned at 9:30am, the location was still closed. I called uhaul again to let them know. The person who answered my call was unable to find a scheduling specialist to help me for 15-minutes. The store location finally opened at 9:45am. I've had people waiting around to help me load my truck since 8:30am, so I was in a hurry to get back home. The one employee working told me the dolly I had purchased was unavailable so I had to purchase the appliance dolly. Then, when we finally go out to inspect the truck, I opened the back gate, and there was the utility dolly I needed. The employee had no idea what equipment they had in the store. The employee went back in to try to refund my purchase of the appliance dolly. 15-minutes go by and they haven't figured out how to do this. 10:30am rolls around and the employee finally realized that the manager had helped rewrite the purchase order to reflect everything properly from home and I was FINALLY able to go move. Overall, extremely disappointing experience with uhaul.

I highly recommended this place...

Excellent service, thank you very much

Tony and Jackie were terrific; I highly recommend this location!!!