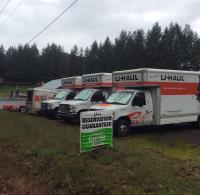 Did inform the guy there about the roof leaking real bad and he said there was nothing he could do about it that we would have to tell ya. Sorry its took so long, due to we didn't have any internet service were we are at.

The U-Haul cab was dirty upon picking up. The associate was new and had not been trained on U-Haul. It was not her fault, but the pick-up took a long time because of it. The "grandmas attic" leaked and soaked a lot of our boxes. When we reported this at the time of drop off we were told we'd receive a return call. I have yet to receive one. I was also informed I owed an additional $30 outside of what I had already paid. When I asked why I was told it was for "Safe Move" which I never requested. We were going a short distance, I always opt out. The associate helping may have forgotten to ask if I wanted that option or not. They also initially tried to say I owed $14 for gas when we had filled it back up to the same amount we received the tank at. The associate at check out was able to remove that and the U-Haul associate she spoke with who was supposed to call me, told her not to worry about the additional showing due. Thankfully as I was told the U-Haul would be $100, I figured the $128 was with tax. I would like someone to reach out to me to see what will be done about the water damage.

I was able to make reservation and pick up at location fairly quickly. I've never driven a uhual before so when I got in the truck and the passenger rear view mirror was broken I was slightly fearful when reversing or parking. However inside was fresh and very clean. Main challenges seemed to be with understanding the corporate website. Possibly due to low rental traffic, site issues, or tech frustrations. Once everything was shorted out it was an overall satisfactory experience.

Better training for the person in the store

They had no idea how to rent me a tow dolley. Spent over an hour there to finally get it.

This is the location I like to go to when I need something from U Haul.

Not sure how well the brakes were working on this trailer. Need to have them inspected before putting them back on the road.

The people renting your equipment we're very nice but didn't know how to rent the equipment for one then the truck had a dead battery I had to call someone to bring me jumper cables. Then they didn't know how to do the return paperwork you would think for two hundred dollars you should have no problems with this not spend Two and half hours of your time getting and returning the truck.

Maintain your truck better. The one I reserved had a dead battery and was 1 quart low on motor oil it had almost no powerstering fluid. So they gave me another truck for same price but it was twice the size of the one I first rented. Plus it took alot more gas and I was quoted at. .89 cent per mile and then they charged me. 99 cents per mile and 8t took me an hour and half to get my other truck when the one I rented was supposed to be ready for use. So No I was Not to happy with my experience with you guys. It didn't have anything to do with the location. It was the lack of maintance that was very frustrating.

Price are a little high

Train the person who does the hookups. For a variety of (probably) good reasons, the person who helped hook up our trailer had never done that before and had to be talked through it. Maybe she was new. But about 12 miles down the road the trailer came unhooked from our car, and was held on only by the chains, on a dark two-lane road with few places to pull over, and no cell reception. I'm guessing the hitch was never really seated on the ball. We were helped by passersby, and subsequently the trailer was most helpful in helping us with our chores. Idon't blame the person who tried to help, but she should have been thoroughly trained, and obviously wasn't.

The lady couldn't understand why my bill was already paid. She kept saying that's not how it's done. She said you pay when you drop it off. She asked how do they know how much to charge if you already pay and you keep the equipment longer then you expect to. The friend with me tried to explain it. I don't think she got it

Train your clerks not to add fraudulent gas charges.

Trailer chains were full of grease. Trailer had no brakes. Left top light was broken/missing

Great service when I returned the trailer.

I am a patient man, so I wasn't bothered but it was a long wait to get through the reservation process. I was definitely well treated and compensated for my patience ????

Service was very unprofessional. Had to wait while they assured on their grocery customers each time. The check in was rediculously long.

Pros: Check-in went ok. I did the pre-check in online but had to redo everything when I tried to get the truck for some reason. The cab was clean, had ample fuel and ran well. Returning the truck went great and flawless. Cons: During check-in, the lady groaned I was there to pick up the truck because she didn't really know how to check some one in and kept telling me she hoped customers didn't come into the store while she was helping me. After a little bit of her struggling, a co-worker came over and trained her how to do it. During the pre-trip walk through I noticed some scratches on both sides of the box that weren't marked. She said they ran out of stickers and she'd just make a mental note of them. We didn't check the inside of the box but she said she just inspected it and said it was clean. When I got to my destination, the inside of the box had some sort of black residue on the floor throughout that I had to clean and the loft was full of dirt and pine needles. Overall: While I wouldn't go out of my way to rent a moving truck from there again, they were honest and the process went ok. I learned to do a thorough pretrip inspection instead of taking her word for cleanliness and next time I'd make a note on the contract of any unmarked damage.

The truck maintained is very poor spudders an pops overeve the motor when transmission shifts, extremely hard on fuel. I am not happy with the trucks running condition! It was very clean. The Rental place is all women no place to service the vehicle. Not very happy customer!!! I had to rent it for another day due to the sluggage it had under heavy load!

The Internet connection was lacking. It took 1 hour & 20 minutes to get checked out. Also the truck had only 1/4 tank of gas. We returned just under 1/2 tank. We should have been reimburse for the extra gas but was not. The woman that helped us with the contract was very nice & apologized for the problem.

Elizabeth was very helpful though they seemed to be understaffed. When I booked my reservation I was under the impression I was picking up the truck at a location much closer to my home. I drove an extra 20 miles back and forth just to pick up the truck.

Location was so far out of my way, way up into the mountains and many miles beyond where I had designated I needed to pick it up from, that it put me way behind in having the truck loaded. I had friends waiting around for 2 hours to help. GPS did not work to get me home, due to location. The location was severely understaffed. The business is a combination uhaul, restaurant, grocery, hardware/sporting goods, gas station, etc. The place was packed and only 2 employees present. Only 1 employee was able to respond to most of the customers needs, including mine. I had requested a flat furniture dolly, specifically, and did do see, until I got back home, that they had sent a hand truck instead. I already have a hand truck. The location's Internet connection was incredibly slow, and the employee kept having to reload pages. Then, the printer wouldn't work, to print out my contract. The employees were very nice and apologetic for the delays, but this was a cluster #&*â‚¬ of ridiculous proportions.

It is not obvious that the U-Haul is in the general store. Need a sign. Nice folks, pretty store.

Young lady was new at this job but tried her hardest to follow the computer instructions and she did a great job.

Give employees training. They were friendly and helpful but unfamiliar and unconfident about the process. I felt like I should of had a discount for helping them through the process.