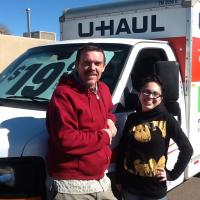 not charge a whole day for being a few minutes late.

The employee I returned my,equipment to was helpful and polite.

The assistant put that the gas was not at 5/16 of a tank which it was as seen in the pic I took. They wanted 6+ dollars to make it. It was an illegal rip off

Well maintained mechanically- yes. But needed a run through the car wash. . Windshield was bug spattered. Who ever had it befor had dogs lots of dog hair on floorboard. Funky smell. The young woman was very quick and helpful.

The building was very cluttered and messy.

Truck was clean but transmission slipped after 19,000 miles. Shocks were like a ride at Disney world. Staff was great and helpful.

ABSOLUTELY HORRIBLE. Barley knows how to do their own job let alone rent out a uhaul. This is a beef jerky shop and uhaul had them load up my car on an auto transplant. MAJOR damage was done to my car during the process because she did not know what she was doing. Also she did not connect the tail light/ blinker lights to auto transport and I had to drive 600 miles without. I have yet to hear from uhaul about fixing my damages. I will be bringing this incident to court if I don't hear back. Unacceptable. Do not rent from uhaul. Never will again.

Don't schedule someone to pick up a u-haul before store hours if nobody is going to be there to issue U-Haul. I waited a WHOLE HOUR speaking to a U-Haul representative trying to figure out how to get our truck that we were scheduled to pick up early. Later when the store opened we learned that there was no way to get a truck before they opened! We literally had to wait until the store opened and if we had known that was going to be the case we would've never signed up for the early time that we did. It delayed us in our moving process.

The ladies that take care of your rental process were very kind and wonderful. I can't think of anything that could be imptoved. With the confusion surrounding how much I was charged. One bank card had 72. And change. When I took truck back and asked to use a second card for any monies I was charged, I received a 93. And change charge on my debit card. This price seems very exorbitant for a 24 hour truck rental. I got the truck and it was on 7/8 of a tank. I filled the tank when I returned it. I would like some form of an explanation of charges. 72.+93 is too much for a 24 hour truck rental.

Everyone was really nice so can't think of anything they could of done better.

The lady who rented me the dolly was very professional.

This is not for this site, but the expereince we had was not pleasant in the return. We ran late on unloading and called the toll free number. They changed the drop off location for me, but when I got there they refused the trailer saying that they had no room. They sent me to somewhere else and it was closed. When we did get the trailer to this location we had to pay extra. I attempted to get it resolved the day we needed to turn in, but no one wanted the trailer. The location advised that they should not had told me that I could of taken the trailer elsewhere. Then on turn in with the extra cost, because my son had to return in that I was working, we had trouble paying. I wish that UHaul would get there act together, espeically at the dispatch level. Not very satisfied.

The you g lady I dealt with was excellent very very kind. Extremely helpful.

Thanks you are great!

The location we chose for pick-up was about 2 miles from us. Location was changed and we drove 8-9 miles However, the location of our choice was not a desirable environment. So the change was appreciated after all. We loved the "staff" and the atmosphere. The U-haul truck was very clean and well maintained.

The person who helped me was SO friendly!!!

Initially I could not pick up at a different location and time. After much difficulty, I called UHaul to change the location to Vigil's Beef Jerky. They are perfectly located for Albq./RR moves and have outstanding customer service.

This place did not bother to inform me ahead of schedule pickup that they did not have a uhual trailer for me. Then sent me to the U-HAUL MOVING & STORAGE AT SAN MATEO AND MONTGOMERY where they took the time to lookup my information and confirmed that my pick up was at the UHAUL on 7625 2nd St NW. When I arrived there the lady did not seem qualified. She did not know how to use the equipment and did not know how to properly put on a trailer. Was not very happy with the service that day.