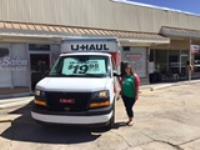 I wouldn't because they have horrible customer service

They had great customer service! I was very satisfied.

First time renting...super easy process, Amanda was terrific too. It was really convenient for me as my job was only 5 minutes away. I'll be much quicker to rent in the future. I transport large items to Tennessee regularly. Why bother round tripping my trailer when I can rent one way?

No one was there to check me in. I had to call and get a different pickup

The dealer was awesome. She has very good customer service! We will be returning to this location!

The lady working at this location was very professional and helpful.

The office still had internet down from the hurricane, so things were not as smooth as normal, but it went well under the circumstances.

The service was awesome. I highly recommend. The sales associate was very accommodating.

The Vendor has poor customer And equipment is not readily available

Rep was very helpful and made sure my rental will be ready for after hour pick up.

The car hauler was to be picked up in Cordele and last minute change had the pick up in Albany (45 minutes away) The brakes on the car hauler stopped working and blew the fuses in my truck. I never got the brakes to work properly and returned the trailer the next day. This was a waste of my money.

Amanda was very courteous, kind and informing. For someone with all those tattoos, I found her quite pleasing and not at all the savage mother talks about.I hope whatever gang she's in doesn't hurt her and never know it's not too late to go to church.

Do for them what you did for me. Service was wonderful. Thank you.

Its a wide car trailer I had. Don't know if its possible but a way to see where the wheels are at night would be helpful. Actually the lines on the road is what I mean.

I will say that this is my first bad experience with u haul. I requested an appliance dolly over the phone, and also asked once more before ending the conversation to be sure. Not only was it left out, but after returning the u haul, I recieved a rude message for me to contact the storage facility asap. The lady in charge had a bad attitude and claims that she was certain the appliance dolly was in the u haul, and also saying that I returned it with a mess in the back and that I forgot to reimburse the fuel that was consumed while in my possession. I will admit that I honestly forgot to add fuel, due to constant harassing phone calls from the office wanting to know exactly when I would be returning it with the time of night being late it was an honest mistake and I do agree with the extra fuel charge. Now, the condition of the van when I recieved it was quiet filthy. I had to sweep it out before loading anyting. When I picked up the U-Haul it was after hours and the office was already closed or else I would have mentioned it to be sure I wouldn't get blamed for it. Also the fees were not explain to me as I feel they should have been at the time of renting it. I was unaware of the insurance cost of $90 which was very surprising and could have possibly been a deal-breaker in the renting of the U-Haul. Overall I was very disappointed with the entire experience although I feel it was not the U-Haul company but the by the employee working at that location. I apologize any inconveniences that I may have caused but I do think some improvements are very much so needed. I have also heard many more negative comments about this location. I will never again use Uhaul and Albany Georgia again do to the added stress of dealing with the harassing office manager. I think she was very unprofessional and could use a little bit of guidance on how to treat customers to have a good experience with U-Haul moving vans.

U need to talk to your people in Columbus Ga. they screwed up my credit card and my debit card so that I couldn't use them to pay for truck. My wife had to transfer money from 2 accts. so that we could pay for it!!!!! Also in Columbus they didn't change contract no. so I had trouble in Fitchburg, Ma. And took some time to find. NEEDLESS TO SAY I WILL NEVER EVER USE uhaul SHIT AGAIN!!!!!!!!!!!!!!!!!!!!!!!!!!!

The rubber gasket sealing the door on the 5x8 had ants, eggs, and roaches. Once I got it home I put raid on them and rinsed them all out. I reported the issue to the Asheville, NC uhaul rep.

I was suppose to have a reservation for a truck, to pick up on Saturday 4/29/17, at College Corner, 2217 Gillionville Road, Albany, GA, which when checked on Friday 4/28/17 was not there and no one could find any record of a reservation. The attendant was very rude and unhelpful. After my experience with the attendant, if I had another choice, I would not have rented a truck from UHaul

Dear Uhaul, I have rented a 26 ft truck this morning the 29th of October 2016. I was given the run around from the get go and was told that i could not rent a truck today because the system was down. After going to a different uhaul place to find a truck after i was told to go there they couldnt help me and I called corporate and they were finally able to get ahold of the area manager and was able to get me processed through his tablet. I also ordered a dolly and 1 dozen pads and neither of them were available to me they were out of the pads and they said they would give me the dolly for free but come to find out there was no dolly on the truck. It has really been a horrible experience with uhaul this time. I have done moves before with uhaul and they went perfect but this was the worst experience i have ever had. because I didnt get the pads, dolly and I had the run around all morning. I think i shouldnt have to pay for this or at least get the $50 for not having the equipment that was reserved and promised to be there. please call me at 229-344-2917 if you have any questions. thanks Tyler Lairsey

Kathy was wonderful!!! Went out of her way to ensure we were taken care of. Thank you Kathy for a wonderful experience during a stressful time.

It looked like the last renter drove the truck down some dirt roads and then walked through mud as the outside of the truck had quite a bit of dirt on it. The cabin also had dried mud/dirt in it. Need some furniture pads at this location Attendant was very helpful and nice. Thank you!