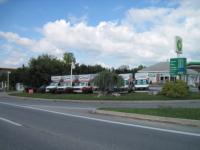 Was relegated to this location because the vehicle I wanted was only available at this location. Clerk working there could have been nicer.

Single worst moving experience in my life. First truck I got was filled with ant colonies everywhere. I was on the phone with customer support for 2 hours as they tried to locate another truck. I drove all over Baltimore looking for a truck while I paid my movers for 2 hours To sit on their asses because they were waiting on the truck. This has been one of the worst experiences of my life and I am considering contacting the Better Business Bureau about this awful experience.

When I went to rent my truck I had a question for the attendant and he just blew me off told me all I had to was follow the text message, that's no way to treat any customer, you don't attempt to even listen to the customers question before you tell them to go to your phone and follow the text, that's bad customer service, and your shops rating from me is in reference to that, all he had to do was just listen and your score could have been completely different. Your representatives personality stinks.

The online process was a nightmare

Nothing. It was fine and thorough.

The cashier could have been a little f

the checkout process was a bit slow but other than that everything was fine.

Quick and easy pickup and drop off. Friendly staff

I had a horrible experience trying to return the truck. When I parked the truck I followed the instructions in the truck, contract, and what was told to me when I first got the vehicle. The worker at this location came out screaming at me because I left the keys there . I tried to explain to him that I was following the instructions printed on the sun visor of the truck and also what was told to me from the location I picked the vehicle up at. He continued to scream at me saying I was going to get a service charge. I tried to ask him why he was screaming at me, but he followed with telling me to get out of his line and not answer any of my questions. I then went back to the truck, got the keys and personally gave it to him. This is probably the WORST experience I have ever had and is unacceptable. I am a very understanding person but this incident left me not ever wanting to rent from uhaul again. I would like to file a complaint about that employee because no one deserves to be screamed at over keys and following the directions I was given.

The guy who manage all vehicles is an ashole and doesn't speak properly with people. He so rude and shows his attitude. The fuel was not on that mark his putet on papers. I made foto but he wouldn't even look on them and charged me for extra fuel.

Attendance was rude disrespectful and unprofessional. After I told him I did not want extra insurance he attempted to scare me into selecting it. After I completed the paper work I realized I needed a hand cart and he told me there were none available which was a lie since there were 3 outside the door. After I pointed to the available carts by the door he said no I could not have one since I competed paper work and he did not know how to update. I should have ask for cart upfront. I apologize for asking afterward but he maintained his position. I told him I desperately needed a cart and he refused stating he would get in trouble if he had to redo paper work. I ask for his name and he refused to give name. I notice his name on his uniform and I wrote it down and then he refused to give me keys to truck i already completed paperwork. I literally begged him for keys and continued to refuse. I called the Uhaul corporate number and while on hold he decided to give me the keys. He then stated he does not care if I complained he has been working at the local BP gas station for 8 years and he could care less. I wrote his name down from the uniform. His name was Mahesh. I called Uhaul corporate and discovered Mahesh actually charged me for the insurance although I vehemently refused. He provided me the yellow disclaimer that I signed stating I understood I did want insurance but he still charge me for it. I did not realize the charge because I was quickly attempting to leave the location. I called corporate immediately upon leaving the location and they attempted to provide me another location to pickup a handcart and I was given a $10 certificate for next rental which could not make up for the horrible experience. I have rented from this location many times and this was my first nightmare. Location is very convenient and open late since its a gas station. If you must rent from this location please double check paper prior to leaving and DO NOT ask questions of Mahesh. I plan to reach out to the area manager to share the experience.. This is in no way a reflection of Uhaul generally...

Everything was great. I did show up at 10 for a 10 :0 pick up and there were three of us that he had to process all while still being the only one on duty the gas station. He did a great job and was very efficient and kind.

Get the piece of equipment that I wanted and actually reserved. Get the guy at this location some manners and personality.

My drop off location was an abandoned, boarded up house. When I first attempted to drop off the uhaul and noticed the location was abandoned, I went to CJ's, which was close by and also did uhaul exchanges. The clerk was rude and walked me outside the building just to point to the address and show me that I was at a different location than my paperwork said, despite me explaining my circumstances, he never offered me a solution and sent me away. I had to park the uhaul at the abandoned house for the night to try again the following day, which required me to take several hours off work so I could arrive before I was told they'd be closed. When I called uhaul the next day it took two phone calls and an hour before anyone believed that my location was actually abandoned and gave me a new drop off. When I attempted to return it again I no longer had help as my movers were only hired for one day, so I had to spend more funds to hire someone to follow me in my car with the uhaul. Uhaul did not even offer me an extension despite sending me to an abandoned location, and if they had I wouldn't have had to take off work or hire someone. This time I arrive back at CJ's to a new clerk, who rudely tried to turn me away before I insisted that I had been given a new drop off location by uhaul and my paperwork was incorrect. He took us to the uhaul and checked the gas gauge, which he said was too low, however, it was not. We pulled forward and filled the tank completely before dropping it off again. The man did not bother to come out and check the gas gauge a second time, but he did make a note that the gas wasn't filled entirely despite us filling it and him not bothering to check. He was very condescending when we explained our frustration about the abandoned location, even telling us it wasn't that big of a deal because it was â€œ500 feet awayâ€, which wasn't true, and ignored the fact that I still had to hire someone to move a uhaul less than a mile and take off work early just to make it by the original drop off location before I was told they would close. He spoke over me and interrupted me several times, and his tone was very patronizing, as if I was stupid and this problem was my fault. All in all, this uhaul experience has costed me hundreds more than it should have. Uhaul offered me no support, and neither did the lazy, dismissive clerks at CJ's. Uhaul should be ashamed of how they handled the situation, because moving is a stressful time as is. Frankly, I feel I should be reimbursed for part of my trip, as I did everything I was instructed to do in my contract. I should not have had to scramble to solve your company's problem, and I certainly shouldn't have to spend any of my money to fix your mistakes when your corporation makes millions more. It would have cost you nothing to give me a day extension.

It's at a gas station!! BP to be exact. And the only guy to help me was the individual working the gas station. Took a long time to get hooked up to the trailer because the poor guy was trying to help 10 people at once. Employee was helpful but charged me over 100$ to rent at location in PA and drop off in NJ. Two day rental. Then I was charged an after hours fee of $21. I parked that trailer perfectly in an open spot with other transport trailers and secured all wires and chains the best I could. After that, I dropped off the service agreement in the Dropbox and wrote down the parking space number on the agreement. The trailer worked out flawlessly, just wish I wasn't charged the after hours fee. Have a nice day.

Dont charge next cutomer for 8 miles of 1.9 gallon fuel it's not fear with anyone

This location has no respect for the customer and they basically dont care what you say and think they are right and they lie to you on rates and charge more. I told them about the wiper blades on the truck not working well in the rain he told me not to drive the truck if I was afraid of rain and my app wasn't working to check in the truck at end of day and I had asked mesheka the gas station attendant to write it down and leave it for his boss and he had said it's not my job to deal with uhaul. If you dont like it stuff shit and told me I was a typical customer trying screw his country over. He was terrible to me and their customer service sucks