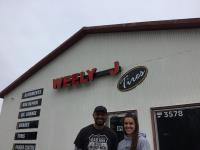 My reservation was screwed up they said I picked up the trailer three days earlier than I actually did and I was overcharged because I didn't have time to return the trailer.

The pickup location caused my trip to exceed the allotted miles. Also, the usb ports did not work. Having a truck this "new" should not have this problem, not to mention extra miles should be given if the requested location is not available.

All was good. I thought since we did not have the total number of blankets from the point of origin, that we would not have been charged for the extra day, but I was wrong. Oh, well.....

I called two weeks in advance to reserve a truck and car transport. The girl was actively texting while trying to make my reservation because I could hear her phone going off in the back ground and her keyboard while she was typing. They waited until we picked the truck up to tell us they didn't have a trailer so we had to go to another location two days after we picked up the truck. The location that had the trailer was not tracking that we were picking up a trailer form them so I had to call uhaul 3 times to get everything situated. They didn't ask us what we wanted our drop off location to be, they just set it and it turns out it was 30 minutes away from our destination. This company is very unorganized and we will not be coming back.

Absolutely TERRIBLE business by James at Weely J Tires. We wanted to rent a UHaul for 2 hours. This timeframe would place our drop-off time just around the store's closing time. When James (their Uhaul coordinator) checked us out, he seemed very professional. We weren't too concerned that our truck's reverse light was out - that was probably a simple oversight. However, not only did James bill us for two days, but he also gave us terrible instructions on how to properly return the vehicle if we arrived after hours, resulting in us being overcharged. In regards to his after-hours return instructions: we made the mistake of trusting his word rather than reading the entire UHaul contract. James told us to simply drop off the vehicle, lock it, and then drop the keys in the lockbox -- which we did 30 minutes after their shop closed. There were still people inside who saw us drop it off, but we trusted Jame's word/instructions and locked the vehicle and dropped the key. It was only after we got home (2 hours later) that we realized that we needed to return our rental ONLINE, and while we were STILL IN THE VEHICLE (in order to verify mileage and the gas gauge level). If you can imagine, you cannot regain entrance into the vehicle once you have dropped your keys in the lockbox. By the time we returned to the shop to try to sort things out, everyone in the shop had gone home. Now, not only were we charged a 2-day rate for a 2-hr rental, but now we are going to get charged the $20 "convenience fee" of having Weely J Tires check the vehicle in for us the following business day. On top of that, we have no way of guaranteeing he won't wait the full 48-hrs before "returning" our vehicle for us, even though we only used it for 2 1/2 hours. Weely J Tires has given us shoddy customer service and overcharged us by a minimum of $80. Their Uhaul manager, James, has made no attempt to return our calls to rectify our complaints. In regards to him billing us for 48hrs for a 2hr rental: this remains unresolved (3 days later) after multiple attempts to contact him. He always seems to be "out of the office," and refuses to return our multiple phone calls and messages we leave with his receptionist. We have also sent a complaint to Uhaul, and they have not replied. Under no circumstances would we ever recommend James or Weely J Tires to anyone, much less their Uhaul services. We will patiently wait to hear back from Uhaul (directly), but until then we have nothing positive to say. James clearly makes his 15% commission by overcharging his clients, as well as setting them up for extra fees.