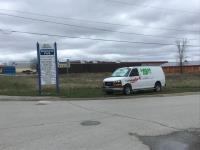 Online check-in was a awful. I had already given you my credit card, I gave you my driver's licence, another alternate contact (my spouse) and then you wanted another alternate contact? That is absolutely ridiculous. What is the point if asking me for my credit card, then? You even asked for me employer contact information (and I really hope you didn't call them). Too much; too invasive for the simple van rental. Never doing that again with you people.

I found nothing to be lacking at this location. The staff were friendly organized and efficient.

Maybe review the controls on the truck so the customer know where all the controls are and how they are used.

Excellent did everything via mobile did not have to talk to anyone. It was fast and easy. Kudos to U-haul for blazing the trail. Other companies should get on board fast

I called multiple times without an answer ever

Cell signal/GPS signal/data coverage seems to have issues in the area so it complicated the online return a little bit. I don't know if offering Wi-Fi would help future clients?

I had to call several times before being able to speak with someone. The line was either busy or the phone would ring with no answer. I finally got through after a whole day trying on and off. I was told the trailer was out on a rental, so I gave my name and phone number to be contacted when it came back available. I never got a call back and had to go through the whole calling several times process to find out the trailer was available and just sitting there. However I was very pleased with the price of the rental and would be a return customer based solely on you fair prices.

The self check in process causes a lot of issues and I waited almost 30 minutes with the help of the location clerk to get my vehicle. I felt I should have been further compensated the 30 minutes of time, but I wasn't. The clerk was very helpful, but the U-Haul Call Center employÃ©es made the process much harder by fully cancelling my reservation and then we had to recreate it.

Nicole at the office was too notch, excellent service. Thank you.

Improve the self check in at pick up making it easier to get in & out Quick.

Staff was great....however, the trailer had an out of province plate that was expired. In Ontario we do not have plates that expire but I still did not like pulling one that had one...

Ask the customer if they want to return the vehicle to the same location or a different location. I wanted to end my move at a different location but was not given the option to choose during the booking process, then was told it could not be charged without incurring a substantial penalty. It was inconvenient for me to return the vehicle to the original location and the mileage charge was almost double what it would have been. Not only that, but when I followed the guide for refuelling, the amount of fuel I put in brought the fuel level to well over half a tank. So overall I could have saved money if the booking process were designed to meet the customers' needs rather than steer the customer into spending more than necessary to get the job done. I will certainly be more careful next time.

We rented a van a month ago, plus another one just yesterday. We were moving a couch for my sister temporarily - dropping it off and then picking it up a month later and returning it - the first trip was actually 2 km shorter than yesterday's, yet we were billed $56.30 for the first trip and over $90 for the second! I went in to discuss and was told they were doing me a favour the first time. When I booked the second time, I specifically asked that they ensure the bill would be the same as the month prior. My husband actually picked up the van and returned it (an hour and a half later), so he had no idea what I had booked or what the cost was. I've made a claim for reimbursement through customer service so hopefully that will come through. Otherwise, NO I would never recommend U-Haul if a difference of $35.00 is charged for the exact same trip just outside our small town and an hour and a half rental! An extra drive to the U-Haul location where was told they could do nothing! , and two customer service reps. on the phone - as I was also disconnected, and now waiting for a regional manager to approve the claim. Not exactly impressed. The first booking was in-house, and the worker, Nicole was great. I see her regularly as I also have storage in the same facility. The second time I booked through a phone call to the local U-Haul location. Thought I was being clear on the phone explaining the booking. Obviously not clear enough. Totally thought I could go in and finalize the bill, as I had done the first time, but my husband was told he could not drop off the van without paying the bill on the spot.

Customer service was excellent. They made my rental experience easy and enjoyable. I have rented from them before and I will go to UHaul the next time I need to rent a moving vehicle.

Keep doing what your doing !

Very disappointed in the charge of KM when I was travelling within a half an hour What started out as a $19.99 van rental cost me $60 and that was with a reduction! Not impressed.

Good overall experience, but the trailer I rented had previously been down a muddy back road and was extremely dirty.

Very positive experience. They are well organized and had me on my way in 10 minutes. Highly recommend.

Young Lady I worked with was extremely helpful and I truly appreciated it. There was an issue south the pick up but not at her end but, it was quickly resolved. Head Office - you should NEVER tell someone who booked a vehicle in line to go and pick up the vehicle booked at another location 20 minutes further North when the booking was done and confirmed because you made an error. You left this woman in a Terrible position BUT happy to say She fixed the situation for me.

I was very pleased with the prompt attention and speedy service. I will definitely rent a vehicle at this location in the future. The Cargo Van that I rented was in brand new condition and drove very nicely.

When I rented the truck online, the uhaul system recommended I return it in another location that what I was indicating. When I dropped off the vehicle after hours it wasn't immediately clear where I should leave the truck. The next day I was surprised to see that I was charged $20.00 to return it. Something to do with not completing the reservation with my phone. No one explained the return process, that a fee was possible or how to avoid it. I've tried contacting customer service via email and phone and no one will engage. Extremely disappointed with UHaul.

Nicole at the front desk was amazing!!

It happened pretty fast, I parked the truck. A guy came outside and said he will take care of it and move it to another spot. Didn't really say much.. but it was super fast which I appreciated.

Fast and efficient. Very easy to talk to and courteous and friendly. Thank you.

I had to drive an hour to get my 15ft truck from here, that was the only downside.

I had a very positive experience. Normally, I look for truck rental companies that offer unlimited mileage, but I wasn't driving far, so it was perfect. If UHaul changed this policy, I would use them exclusively.

Quick and easy, the manager was a pleasure to deal with

The only issue i had was i made it clear from the beginning i wanted the 20 or 26 footer but i needed it for approx 36 hours. I spoke to 2 different people(one in store and one from head office) and not until less then i week prior did another girl tell me i couldnt have one of those for more then 24 hours. So i ended up only getting a 15' which was more trips.

They were closed so can not answer this.

The vendors were very very nice and professional

Amazing customer service from the friendly young lady who helped me get on my way with my invoice and hook up of the trailer, to the gentleman who helped me put it back in its place the following day. I will be back to rent again, knowing I will have assistance from such helpful and courteous staff.

Always a pleasure to deal with. Online booking could be a bit better but did get it done to reserve after hours.

Know the vehicles better and train your staff to not just â€œrentâ€ a vehicle. The staff or head office do want to take responsibility for showing me a video that suggests a queen bed can stand upright in a cargo van but I can tell you it does not!! I then had to take another day and be charged mileage to complete my move. Not impressed!!!!

I had a low tire pressure message on the dash. When i physically inspected it, it seemed okay. The iPhone check-in was a joke. Easter Sunday so I had to rely on Customer Service - very bad!! She put me over to scheduling who was able to help me get the key from my location. It took 45 minutes for me to retrieve the key.

Service was excellent, Nicole was great. Only thing I would improve is the truck storage area, it had rained and the location was very muddy. Cheers, Paul

Beater place too put your streapes Thank you .Have good one and Thank four your help Andreas See you sometime

I had arranged with the employees at 10 Stewart Court, Orangeville to drop the truck there when I was done with it. This UHaul location is closer to my residence and the staff there was friendly and helpful the last time I rented. They are not on your drop off list and should be.

Something minor - The dolly wasn't attached in the back of the truck and was moving all over the place when I left the rental store. Made a lot of noise and scared the heck out of me when it first happened!

Van smelled of musk and stale cigarettes Van was not very clean. Person taking our reservation was great though.

I dropped the truck off after hours, so I didn't have any interaction with anyone