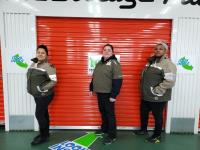 the trailer had a small amount of leaves and brush on the floor. It took me a few minutes to sweep these things up. The trailer hook up was done very well. The trailer worked fine for hauling my motorcycle. The build in chock worked flawlessly and the bike held tight with 2 front tie downs. The drop down ramp was also very good.with a built in spring to help to lift the heavy ramp.

Staff was professional, thorough and prompt. Thank you

Wasn't to clear about the charges. Didn't indicate the mileage price, didnt clarify the time of return, and you've advertised $39 for the 20 footers but bills is $89 and some change.

Consider better ways of verifying military members with licenses that don't expire. I will not carry my LES around nor provide it to an agent via the online check-in simply because you don't have another way of understanding/verifying a license with no expiration date. I will be trying another moving company as a result of this.

The price for a 5x8 trailer was extremely expensive for this trip! It cost $400.00 to rent the trailer for the trip from Virginia to Alabama where as if i were traveling the other direction it would have only cost $62.00 for the rental. Then the trailer received for the long distance trip was an older trailer with rusted hitch connection, door tracks and handles. The door was difficult to raise and lower as well as secure with rusted latch.

A bit of a wait because the computer system insisted the furniture dollys were unavailable even thou they were. But everyone was cool and cheerful.

The first van I got was dirty and smelled really bad. They offered to bring me out a new one and I asked for the exact same one but I did not get the same one. I had to go back a few days later to get a different one. I was overcharged and they only took off one day. I need someone to call me back about the situation. 703-544-6290 Jess G.

Had no issues with this service and would recommend.

Chose contactless pickup. But lock wouldn't work. Lady switched me which was nice but the truck I was switched to ran absolutely terribly and needs serious maintenance. The back door also was insanely hard to close. Grown men had to jump down on it. At drop off, I put gas in it and the man tried to tell me I left it on empty. I had to show him it was above a quarter and exactly where I received it. He then still tried to charge me the fuel cost stating it was empty. How does he not know how to read the gage? it took several minutes for him to figure out how to take it off when I told him I wasn't paying for it. Overall the location and process is fine but worker was terrible and truck needs maintenance

Staff was very professional and courteous.

I think everything was completed right at this location. They made pick up and after hours drop off easy. Would recommend this location.

We rented a 15 feet truck to move from Lorton to Charlotsville. Half an hour into the trip it started raining, and it turned out that the windshield wiper on the driver side did not have the blade, only the metal arm, that was making a screeching noise, while the other wiper, on the right side was taking care of some of the rain. I called the Lorton location, and they transferred me to Road Assistance. I was on hold for almost an hour, being taken in a loop and not being able to talk to anybody. My son and I took turns driving, we stopped to get some respite, the rain continued until we got to Charlotsville. It was unsafe, but we made it. Once there, I called U-Haul again, and this time I asked the representative to stay on the call while she transferred me. We were on the phone for more than half an hour, and she managed to send a text to somebody at Road Assistance, it turned out we were number 26 or something similar in queue, we would have never been able to actually speak to somebody at Road Assistance, just like the first time we tried. With the help of the U-Haul rep, Road Assistance was notified and they told us to wait for them, to get a new blade. We waited more than two hours, they came and put the new blade in. By the time they came it was almost 8 pm, and when we finished dinner it was already dark. I started my journey back home, this time I was alone, no other driver to take turns with. I did not even make it to the first light stop in Charlotsville, and the blade flew in the street. I blocked all traffic, while my son looked for the blade, and then he attached it the best he could. I was lucky he was there to help me out, it was pitch dark and rainy and he was lucky to find it before any other car ran it over. The blade did not fly away again, but it did not do a great job, either. I drove for about half an hour, in the rain, and after a while I had to stop at a gas station, and ask for help, as the wiper was not properly wiping and it was unsafe to drive all the way back like that. It took two people to properly install the wiper, one tried, could not do it, and asked for help from a co-worker. I started driving again, but by that time it was past midnight, and I had to stop by the side of the road to take a break. I was scared, I felt unsafe, I was extremely tired, and I could not sleep and get rest. I prayed I would get home safely. I ended up getting home at 2:12 am, in non-stop rain, with an unsafe 15 feet truck, that had a poorly lit dashboard. What we thought would be a one day trip, all during daylight, turned to be a complete nightmare, unsafe, extremely stressful, and exhausting. When I returned the truck I asked what they could do for me, after this horrible experience. I was first told that they could give me $25 back. I was lucky to have the manager onsite, who offered $100 back. Months later, I never received any compensation. At this point I hope you will reimburse me for the total amount, my whole experience was a complete disaster, including a broken promise by the manager. I was lucky to have made it home alive, I could have had an accident and this could have ended much worse, all because negligence to check for a blade, initially, coupled with poor knowledge on how to install a new blade, by Road Assistance.

The Uhaul app can be glitchy but this location was great.

The online reservation system would not allow me to check in, so had to go inside. CJ was very helpful and friendly. He was also there when I checked back in. Again, the same friendly customer service. Thank you!

I had a 5-star experience right up to the point where I asked for a $5 bag of rental blankets after I had signed and paid the contract. The technician said no problem and they would add to my invoice. Upon return, I found they added the blankets plus $11 of trip insurance that I had declined earlier. I corrected the error before paying but was disappointed the technician took this action without my approval. Always be present when your contract is modified!

We needed the clerk to explain the vehicle numbering system. And it would be better to get the truck that was at the back of the line. We had to wait while trucks were moved so we could ours out

Just keep up the great work! Moving is stressful and it is nice to know that this uhal location values their customers enough to make it an easy process to rent and return a truck. Thank you!

Why would you surprise me with wanting to call someone besides me to do some kind of verification to rent the trailer. This was not present at checkout online. I've never had that as a ask from uhaul before. You want to wake my near 80 year old mother up at 7:30 am. F u. I'm not giving you that. You don't need it. And dump the phone app for entering my drivers license and info. I'm standing right in front of you lazy jerks. All this photo taking and whatnot seems over thought and ruins what was already a tedious user experience. I'll look for other rental services in the future. Dumb. Really dumb surprising me with info with hurdles I don't want to go through.

Check in was challenging as clerk did not speak clearly and return was ridiculous because of the slow it equipment used and the employee needing to enter information multiple times.

Shawn was excellent over the phone, helpful, informative.. and in person she was pleasant to work with. Keep her around ðŸ‘ðŸ¼

On line system could be more user friendly.

Distance from my home is a little far.

Great service. In and out. No problem at all.

We were told we could deliver to our drop off location after hours and that was not the case.

they make it very hard to justify purchasing my own trailer,.. A great team you got there!!

My truck was parked between two other trucks and not where they said it was. Also, it was raining and the back of the truck was open.

A customer service representative was rather short with me during a phone call to determine status of return. I informed the woman that I had dropped off the rented trailer in the upper parking area due to large quantity of returned equipment in normal area. She sternly reminded me that I should have checked the vehicle in at the time if return, however, no instructions for this process was relayed at the time of pick-up.