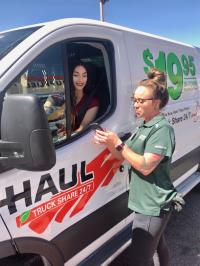 Both of the people I dealt with in my transaction were wonderful knowledgeable and helpful. The experience was very easy and cost well less than I expected

We are pleased with the movers. They were amazing.

Number one shop in Albuquerque

We had a car on a trailer, that the origination point insisted on loading and strapping down, because we paid the extra fee for loading and unloading. The destination location insisted that they don't ever load or unload cars. After informing them that it is in the contract, the finally unloaded it. Sent out a guy with no mask on at all. We stayed way back.

Just the staff needs to be more upbeat

Have used them multiple times and the service is friendly and fast.

The young men that dropped the trailer for me oh, we're very polite and could see for themselves where the wire had been pinched and arcing to the trailer frame. It was them that pointed out that I didn't have a sleeve for my contract. And therefore didn't have the claims number to file my claim. These gentlemen were very helpful.

Outstanding individual who assisted me was outstanding

I wasn't able to pick up the truck cause I could t be â€œverifiedâ€ and had to walk on the cold!!!!!!

Every employee was amazing. I would recommend this location to all my friends and family.

Nothing service was great

I was especially pleased with the friendly service! That's one thing I find that's important! Great Job! Plus smooth process in and out+

Pick up was stressful. Had reserved online and lady made it harder than it should have been! All we needed was to pick up keys she wanted to make a whole new order and didn't believe we did an online one until I showed her on my phone. She then wanted a whole different card even though a hold was already on mine had to prove that showing my bank app then finally after arguing with her she said â€œoh it's already taken care of?â€ Like yes that's what me and my wife were telling you for the last 20min!! Was not a pleasant experience that's for sure!

Everyone I dealt with at U-Haul was very helpful, professional and nice. I had an easy and great experience.

I love this location. The guys are gentlemen and they are willing to help.

Truck was a little older so it was slower that a newer truck would have been. But service was excellent. Thank you.

The workers were very friendly and helpful.

They opened late 7:01am they took their sweet time opening the till, the guy didn't say "Good Morning" and made a smart comment to me about my phone number when I asked him 'if they had my number...he said "It's on the invoice, like I told you." in a shitty way. This whole experience was horrible! I had to stay in a hotel an extra week, because of you guys.

The young counter person was abrupt and short. Appeared as if he did not want to answer my questions or maybe that I should already know the answers.

Checking in and out was quick and easy.

Check in and out was very smooth. Staff were great!

I have dropped off at this location many times and they are always good to me.

Very helpful. Everything in good condition.

This is the only uhaul location I will go to. Been coming here for several years now....

I saw online with my rental 1 month free storage but no way to do that online. I called and was told it had to be done in person. When I arrived I was then told the free month was only for one way trips. This wasn't explained online or when I called. So misleading. Then when I checked the vehicle out I was told "The gas tank is full, please return it that way or be charged $3+ per gallon needed". I put 19.5 miles on the truck, and it took 4.8 gallons. When I told them that would be 4 miles to the gallon (I showed them pictures of the gas pump totals) I was told it gets 10 miles to the gallon, so that's double what it should have been. The attendant then told me "Well I can't reimburse you", so I asked that it be taken off he total, which they refused. I argued with him for a while about it, and then told him to just charge it so I could leave. He walked away and I stood there for about another 5 minutes before I noticed he was cleaning the truck. I walked over and asked if we were finished and he said "Oh, yeah, we were finished earlier". Was he gonna just let me stand there all day because he was mad about me arguing about the gas costs??!! Talk about deception and crap customer service!! I'll never rent from your location again (and maybe not even Uhaul in general) with that kind of BS happening. Rude, unprofessional and the "deals" are misleading at best, and scams at worst.

This location provided the service I have come to expect from UHaul. Quick, friendly, and helpful service from a great team. Thanks to the Albuquerque location staff!

Staff was super friendly and helpful and fast. Had their (digital) paperwork and workflow locked down and perfected. These guys are pros and it helped the lines move fast and everyone was happy. â­â­â­â­â­

All is good, nothing to change.

The only issue that I had was that they were not able to get me a larger movng truck at the time I needed it but they found a solution that worked for me in the end and went alittle extra to help me out. Great Job.

Number one in my book

I was a little confused about moving in based on the information in the email. Maybe I didn't read it correctly. Anyways, the girl in the office gave me a map of the facility and marked my storage unit. She was very helpful.

I had a good experience with the storage unit except it became a bit expensive!

Overall a good experience, but there is a lingering odor in my upholstered items (one couch and one armchair) that is really unpleasant. I'm hoping they will air out and stop smelling after a while.

I honestly have no complaints. The staff is exceptionally helpful. They are the best part.

Thanks for taking good care of us!

Great location, reasonable prices. Secure and climate controlled. 2 carts available to help loading. Just be aware the unit may be short, only 6' high.

All the staff was great, friendly and very helpful i will return and recommend my family and friends to them. Thank you all so much

Only issue I had was connecting to WiFi. There were occasions when I needed to rent a truck to move items out of storage and tried to self service but could not conduct pick up transaction, so had to bug clerks at help desk. Otherwise I was shown the utmost courtesy and service.

I love this place! The manager and her staff are so nice and helpful.

STAFF WERE AWESOME. JUST SO HELPFUL. THANK YOU

All of the staff here were awesome! Multiple times they exceeded my expectations. Thanks for a great experience!

Thank you for taking good care of me

Very friendly and easy to work with. It was a pleasure storing our belongings at this facility

Super friendly staff, always on top of any questions myself or my wife had. Secure and spacious.

Madeline was very friendly and attentive ensuring I understood the entire process.

Everything was very nice...friendly staff! Please smooth out the concrete entry way at the back entry exit door...very rough for the carts to run over. Thanks! Ed McNabb for Ron Heath

Randie and Joshua are great-- very organized, efficient, friendly, and helpful. I have already recommended this location to friends who I know are moving in the recent future. Thank you!

Johnathon helped resolve my issue with storage not being reserved by 1800number . He helped relieve my anxiety.

They were professional and nice, I recommend them to the highest👍

Staff was very friendly courteous and helpful... Very attentive and knowledgeable.. Will definitely return in future if need to...

Everyone was super! Thanks! ed

Outstanding staff, all of them always went above and beyond to help with anything I needed. First class service all the way!

The staff was very helpful and efficient despite the number of customers.

Zac helped me get a unit and gave me excellent customer service I would send my family and friends to his location. Thank you

This is an excellent storage facility. I've rented units here twice and have been very happy with the security, cleanliness,climate control and friendly, helpful staff. I would recommend it to anyone!

I had called earlier that day with some questions and the young man on the phone was so polite and helpful. Later when I saw the two men in the office, both were polite and thanked me for my business

Access to my UBox was made easy by the friendly staff.

Need more 10x10 or larger units that are tall... could not use the short ones because my main reason for storage unit was too tall to fit in them

The staff was very helpful and extremely friendly!!!

We love the San Mateo location and will continue to use it for our future storage and moving needs! Thank you!

Very friendly and helpful resolving my storage needs. Thanks much.

Would use them again very helpful

I have always utilized this location. The staff has always been professional and wonderful to work with regardless if it was renting or storing. I will highly recommend this location.

These guys were very friendly and helpful!

The staff was very helpful and attentive. They made it pretty convenient for me.

In our 3 years of having the unit everyone was always very helpful and nice. Thank you!

Thank you for great customer service and great facilities.

I cancelled that reservation over a month ago and was assured it had been cancelled by corporate along with the rental. So, what is going on. The new system doesn’t work and is a nightmare.

Thank-you for sending an e-mail each month.

The Staff went out of their way to assist me. But your limited comments will not get across how your employee helped me when your outside company that unloads a truck was rude and unprofessional.

The manager, Eric tried to charge me for another month. $140.00. Over a one day error. Even though I was given the wrong day to be out when I called in. He hung up on me when I tried to reason.

No matter what facility I dealt with, the UHaul experience left a lot to be desired in terms of general knowledge or accuracy. I will be hard pressed to use this company again.