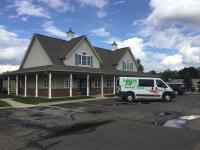 I was charged of cleaning fee of 25 for not folding the rug, which could be avoided if the renters was given a heads up although there is a sign on the truck but not everybody are paying attention to it..Also, i asked for the refund i was only refunded $15 instead of 25.im Not happy with it.Thanks

Please keep it up the great customer service!!

It was hard to get the lock box open.

Get approval info besides license and real time image beforehand. Typically people are limited on time when renting a truck and any thing to speed process would be helpful

Thus UGaul, unlike some, knows their business well and treats their customers well. On time, accurate, knowledgeable, friendky, Will be back.

I ordered a dozen pads and none were in the truck. Since the store was closed I did not have pads for my move. Additionally, with the phone pickup option, it was not clear ahead of time that I would have to provide contacts that would be called. If this is a necessary step it should be made clear when ordering the truck, not when I show up at 8am for it.

Overall, not a pleasant experience, I made a reservation for a truck and an auto transport to pick up at 3 PM, and the auto transport wasn't available when i reached there since the previous customer didn't return, i was given an option to wait indefinitely without a guarantee when it will come back or come back later and pick it up later and i opted the latter, I was billed for both auto transport that i never picked up (which i was fine, as i will be picking up later) I had to drive about 25 miles to home and back - what a huge inconvenience and waste of time. I was told that i would be given some sort of additional discount for all the inconvenience, this never happened, on top of this they made huge mess with billing and refunds (They initially billed for auto transport which i was fine with, but when i came back they said that they to bill me again for auto transport, they explained they will issue refund and bill again, what a mess). I was also told that some one would call me back and give me a detail explanation of refunds and discounts and everything, no one did, a week i called them back asking why didn't get a call. Mark from UHaul called me from this location and said he need to research my issue and get back and it's been a week since, he never did either. What a waste of time and effort to deal with this location. I would never rent again at this location.

Your mobile pickup process took a half hour with multiple screens and phone calls. Horrible experience. Will not do that again. If you have not figured out How to streamline this before i need vehicle the next time, I will not use your company.

The woman working at this local is what made it go from average to extraordinary. She was friendly, efficient, cheerful. Really a great employee.

Uhaul was reserved for 12pm but the vehicle wasn't returned until noon and I wasn't able to leave with the rental until 12:20pm. Your scheduling system should accommodate for the time it takes to clean and inspect and also the paperwork you have to complete prior to renting.

Shawn was very nice to work with!

Customer service and the vehicle were both excellent!

I did not know when I returned the truck on Sunday that there would be no one there ! They should have told me on Saturday when I picked up the truck.

Very friendly, professional. I loved being able to have the truck for 24hrs for the same price of one day. I will do more business with you folks again and I will let others know to go to you.

Property Manager, Shawn, is a Superstar. She handled everything in such an enthusiastic and professional manner. Be thankful you've got such an employee in the service industry. The only issue I had with my rental was the website not responding correctly to upload the images you required. This was not a local office issue but one with U-Haul. Shawn was able to find a work-around and get me going. Again, excellent service. Thank you.

I would suggest that this location have a bigger parking lot for over flow! there were way too many trucks in parking lot. it was hard to park the 26 foot truck i rented. the parking lot was barely large enough to fit truck in space and allow for room for other trucks to come and go.

How can you improve on perfection??

The staff is fantastic and the online check-in saves a lot of time.

This was not the lady at the desk's fault but U-Haul's policies it's self, I only drove the damn truck 3 miles and I only got $70 back out of the hundred dollars she took for me and I only had it for three hours there is something seriously wrong with your policy

The rental blankets came in 6 packs. Assuming they are washed and clean. When we dropped the truck off we had 3 unused . We didn't fold the used ones assuming they needed to thrown into a washer. We were in a hurry but was informed we were being charged for not folding them. We would like our $25 back.

everything was fine. well done.

I had not rented in quite some time. Very impressed with the technology now being used in the process. Very good experience.

It was difficult to communicate with uhaul staff via text chat on your website. Not everyone will have good cell service for internet browsing and a direct phone number should be offered.

Everything was easy to figure out and the service was excellent. We will be back for our U-haul needs!

My only problem was the mobile checkout. After taking a photo of fuel gauge and click continue it went back to the start of checkout. Idk if I completed so I talked to an associate at the rental facility. Besides that it was excellent

You guys are fantastic thank you!

Your phone check out did NOT work well...trie an android & an iphone...took over 30 mins to finally get it to work. Not sure if it's Your site, or poor service at the location I used...but it was Very Frustrating!!

It was an easy, quick drop off. No problems.

Everything was great! Smooth pickup and return. Staff at this location are amazing! Totally helpful and very friendly!!!!

The truck is extremely loud, both engine and road noise. Seriously unsuitable for a long distance drive. A rear view camera would be a plus. Many, perhaps most people who rent from you rarely drive trucks, let alone large trucks. Better visibility would be a plus. Straps, to hold items to the side walls, without charge, as well as half a dozen wrap blankets, without charge, would make people feel like you were superior, not merely another generic company.

Wonderful received at the front desk very friendly with a big smile they answer all my questions .lovely .

Both of the ladies that were there was really nice and helpful!

The app does not run well. After several tries to make it work, the clerk had to enter my info on paper.

Nothing everything want great

I'm not sure if you check customers in and out like this all the time or is it's due to Covid. But, if it's all the time, I didn't like it. I did all the work for you guys. I mean, if I was offered the choice to do it this way, with a little discount to mileage or rental, it would be worth it and I'd probably do it...it wasn't horrible, just not great customer service.

Everything was great except for your web browser and also the app. Picking up took a hour and it took another 1/2hr to return because I was being constantly kicked off the site and app during both picking up and returning. I have 4g at this location and still would not work. This will be the last time I use uhaul. Great people at this location just poor technology on uhauls part. A complete waste of my time and money.

why was I charged for FOUR RENTAL periods? I picked up the truck on Friday, and it was returned on Saturday.

Cruise control on the truck would have helped a lot.

The return process was very diffcult to complete after a long day and the app was not working.

Office staff were pleasant and professional.

The representative was very friendly and helpful.

So far U-Haul has charged me 174.00 for a 19.99 truck and a 24 mile round trip. I call they said it was a mistake and they would credit me back I am still waiting. I am going to the BBB and posting on facebook-to this day have not received a credit. I am 74 and live on ssi so there is not any extra money-very bad

Cumbersome online rental requiring way too many opt outs for add on items, the mobile equipment condition verification was not convenient to explore at the time of check out and perhaps should have been introduced at the time of online reservation process in lieu add on upgrades.

The girl working in this store on 1/21/20 provided exceptional customer service from the beginning to the end of my visit . She made the process super simple and was very knowledgeable about her position. She was wonderful, and should be recognized! Great place to rent a uhaul !