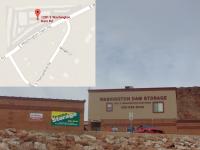 Great job... The guy in the office was fantastic

Truck was dirty, they charged me 20.00 dollars for fuel usage, I drove only 8 miles. They said it had half a tank, it was less than half and I get charged for that.

Clean the truck! Inside and out. Thanks.

Was told I could drop off anyone at the drop off location with no problem. Location had no uhaul signage, and I got charged an after hours return fee. That was never explained

The man at the rental facility was AWESOME! The network was down and not accepting Credit Cards. Yet this person found a way to help us and have us out the door in 15 minutes. GREAT GREAT EXPERIENCE!

The Uhaul representative misread the fuel gauge and I forgot to check it myself. I only drove the truck 17 miles and put 2 gallons of gas because I figure that would cover the gas cost. I had to drop the truck off and leave and I ended up getting charged an extra $16 for 4 gallons of gas. The truck was also dirty inside.

I was helped by a gentleman name Rick, he was very easy to work with and made the whole process quick and easy Top notch customer service from Rick

Rick was a terrific help. I would recommend Rick at this location any time. The truck was clean and ready to go.

very nice and professional. Great over all experience.

This place is spot on. Rick, who I worked with is a great guy. Honest and on point. The trucks were clean the spaced for storage even better. As long as I live in Southern Utah and in the Washington area I will use this Town and Storage. Well done!

Please check the windshield wipers to make sure they are still serviceable. Ours had to be changed when we reached our destination.

Initially, I had chosen a drop-off location which was literally less than two blocks from my new home. I was called and told that I was going to 'have' to drive another 44 miles (88 miles round trip!!) to drop it off as somehow there was a "mistake" in allowing me to choose that first drop off location. I adamantly refused to be forced to add mileage which could have been used against me, as well as having to find a ride to return to my home (when I am new to this town and do NOT know people!!!) or add to my expenses to have found LYFT or UBER. The woman to whom I spoke was quite unhappy at being told that I was not going to drive that additional distance and was rather condescending about finding an alternative. Granted, this alternate drop off location was much more reasonable than the 44-mile one-way drive, but I should NOT have been essentially "punished" for someone else's *lack of planning* when it came to accepting vehicles. Fortunately, I was able to find a ride back to my home.

This location also was supposed to be open until 6pm. I arrived at 5:30 pm and everything was locked up with a sign saying they would be back at 9. I wasn't sure I was doing the mobile return correctly or if I was parked in a correct or secure spot. They didn't have any signs or anything around so it took me 45 min to figure everything out and cost me more on my Uber, Terrible experience start to finish. Would like to talk with a supervisor ASAP my phone number is 435-764-7373

Someone had smoked in the truck

Sue and Rick are amazing at Uhaul! The service was great! The truck was clean and worked great! I refer whoever I can to them. Two thumbs up!

Everything was great, Rick was awesome Great Customer service!!!

Service was great however to move from Hurricane to Cedar (60 miles) the cost for a small truck was over $100. Whatever happened to the $29 or $39 fees? I had no choice but would like to know why the trucks have these prices all over them but

The attendant that helped me went above and beyond to make the return easy! For that he gets ????

Everything was nice, very friendly and helpful. I will always use this location in the future!

It said air ride, most if the air was through the door windows. Get ride of the gas engine, diesel please.

Very pleasant young lady very helpful with the pickup of this truck.

It was very close to my new home and the person did what was expected. I will be renting another truck next week to take the last load. I will try to work out a better deal!

Great sales lady, she was a lot of help

Have a sign or something that says to not park the trucks in the tiny parking lot.

Was very good ask if truck had a problem I said it had no power and had a hissing sound in the motor. Very nice service!

When I picked up the truck, the young man helping me was great. We had been assigned to a pickup far away from our house, so I asked if it was okay to drop the truck off at the closer location when we were done. He said that was fine. I called the location closer to our house to verify it was okay to drop it off, they said it was fine. I also called Uhaul to verify that was okay, they said it was fine. A few days later, an older man, seemingly the manager, called me and asked where it was and that he was ready to report it stolen. I explained I had dropped it off that very same night at the other location, which was approved. He then got mad at me, raising his voice, and telling me that I don't get to just decide to do that and that is very rude of me. Shocked, I again explained that I didn't just decide to do it, it was approved by HIS employee, the other location, AND Uhaul. He then said I was going to have to pay for it. I did have to contact Uhaul again cause the gentleman did charge me. The Uhaul call-center representative was very nice in the whole process and made sure to remove that charge. However, the gentleman from the storage place was an absolute jerk, which really soured my experience.

The computer was very slow and took us 38 minutes to just get started on the paper work. We were there well over an hour to get the paper work done and get the truck. The location is a beautiful facility, great office, very clean. The gal was helpful but could not get the computer to work.

The staff their was very friendly and helpful. I will definetly use them in the future.

Manager went above & beyond. Highly recommended!

Great service, easy and accommodating. Everything was as promised. Would definitely use them again!

We could not have been more pleased with the U-haul rental experience. The manager of the U-haul dealership at Town Storage in Washington (I think his name was Stan) was so very helpful in explaining how to safely use the trailer. He hooked it up for us and double checked all the connections to make sure everything was in good working order. He gave us tips on the best way to load it and could not have been more courteous. I wish everyone we did business with was as nice and accommodating as Stan is. Thanks U-haul ! L. Don Starling

Just good helpful people! I will do business with them again. Uhaul also has the best customer service staff on the phone.

HAD to drive 45 minutes one way to drop off U-Haul when there were other stores closer.

The rental was from St George Utah to St Paul Mn. 5 X8 unit was used. The rental was waiting and clean at pick up time. I would rent again, and recommend.

My experience returning the trailer was dreadful at best. It had nothing to do with the facility where I dropped the trailer but the people on the phone. I was told to go to a location 1/2 hour from my home and then told they did not have room for the trailer and I had to drive to a facility 5 minutes from my house. I was told that they would call the facility and have them wait for us. When we got to the facility no one was there and when I called Uhaul they told me they called and left a message. I specifically gave them my cell number and I can assure you I got no call. We had to wait a hour for someone to return. The people on at the Uhaul number were of no help. Test assured we will NEVER use Uhaul again and I would not recommend them to my worst enemy. If you would like to discuss this you can call me at 847-767-7028

Jeremy and Feleischia were very helpful and went out of their way to accommodate our needs. I would recommend this location.

They were very helpful and accommodating. I would definitely use them again. They were quick and easy to work with. Best rental experience ever!

I would recommend it if you don't need any boxes. This is the second time I've used this location. I don't think they carry boxes even though they say they are out. Really, a storage business with no boxes. This was very inconvenient because I had to go elsewhere to get boxes My drop off location in Flagstaff has boxes coming out of their __ses.

thank you for the UHAL personal and the great experience.

Truck was bashed up but serviceable.