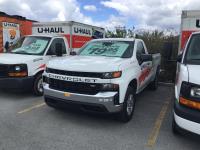 Great service and nice people to deal with.

I dropped off my truck and car dolly after hours and left the key in the box. I did not have any contact with anyone, however, the store and surrounding grounds were very clean and well groomed.

The lady was working alone and she was amazing!!! Very professional and answered all our questions she was fast and efficient she deserves a big raise!!

Rained during our move. The trailer leaked and several pieces of furniture got wet. Worst was the mattress and box spring. Had to drive 15 miles west of Blacksburg to Dublin drop the trailer. The app didn't work so after 10 min. of frustration, I called the 800 number and they noted it. I had to call on Monday to get conformation. A $50.00 refund would be nice for all my troubles. Thanks,

Had a problem picking the truck up online because the U-Haul website was down. Took about a hour to pick it up.

7/17/2020 early that morning, we recieved a phone call from the Employee at Uhaul Town Storage in Dublin, Va. She was very concerned because the Uhaul we rented was not back yet & explained that she had rented the truck out at this time & needed the uhaul back asap (right then) because there were workers and other customers their at the uhaul location waiting for the particular truck that I had rented to move my family out of our home & into another. I told her that I was very sorry and that time had passed by my reserved time, but that I was bringing the uhaul back later on that day & accepted and knew the extra one day late fees and charges that were going to be added to my account. She was very hectic and told me I needed to hurry up and sounded like she was in panic not knowing what to do because this incident occured. Customers have the right to keep the Uhaul passed time but with the understanding late fees and everything that will apply. I went on the website and seen that everything was fine with my reservation and it didnt seem like I was in trouble for keeping the uhaul one extra day. The worker really made me feel as if I was doing something wrong for keeping the truck for 2 days instead of 1, without caring the MASSIVE NEED that me and my family needed it for as well. She called us over 5 times throughout the day & all i said was sorry I'll have it back later. I felt rushed all day and really bad that I had messed up a reservation for another person , but this was not our fault and think future reservations shouldn't be allowed to be booked while the uhaul is out with another customer. OR it should be told when picking up the uhaul that it has to be back, no.acceptions, because its already rented out for the next day not really thinking about the current customer at all. Other than this, truck was clean reliable and got everything moved for our 2 bedrooms family home & recommend using for anyone to make life easy.

I was very disappointed that I was forced to drive over 60 miles in order to pick up the trailer. Further i was not advised of the location change until the day before my move. Will think twice about using UHAUL in the future.

Nothing. The person was organized, helpful and very friendly. I had a great experience.

Very willing to help with the rental experience

The representative was polite and very nice to us.

The tires were 30+ psi under what they needed and the upper left lights were burned out.

This is the best place BY FAR to rent a nice clean U-Haul at a great price! The business owner is very professional and the waiting area is spotless. I was in and out in quickly with no hassle. A+++

Even with the virus issue and the distance I had to travel to pick up the equipment. It still was a good rental

the after hours call center helped. all good.

Robin and Christine were excellent help in accommodating our situation. They went out of their way to get us out on a weekend!

Can't improve on the best!!

This truck leaked tons of water inside where all my boxes were.

Staff was very friendly and helpful

Nothing. Everything about this location, the equipment, and the overall service was excellent. From the first call to the 800 number to the drop off. I had called a couple other locations, one was helpful, one was terrible. The representative at once site told me that U Haul no longer rents the type Utility Trailer I rented. He told me I had no option but to rent a car hauler which would not work for my purposes. I said I'd try other locations and he told me I was wasting my time. The main U Haul call in center located one within 25 miles of the guy who swore U Haul doesn't rent the equipment. The trailer was absolutely perfect, pulled smooth, brakes were excellent. Really great experience.

30 minuets away from my house, it's not drop off location.

Great customer service, this was my 2nd time using this location & will use them again if I need moving equipment.

Great place to rent from, staff was friendly and helpful

I had to drive 30 mins to drop off my truck because the local sites were saturated. This cost me additional cost for gas and then they had the audacity to charge me for going over 3 miles on mileage. The lady at the drop off site promised to reverse this charge but she did not.

Smooth drop off easier than I thought it would be!!

The lady running this location was helpful, courteous, and had a great customer service ethic.

Nothing! Excellent service and interpersonal skills!

we got great service here. The lady that worked there was so nice and efficient.

The paper contract in which I received was not the same as the electronic contract that was emailed to me later. I also had to stress-fully get to a gas station with only six miles worth of gas in the tank when I picked up the truck.. I was also told that I would be receiving a refund for the gas that I would be putting in the truck and leaving in the truck. This gas equals to 10 gallons, which is about 23 dollars by standard gas prices, but is more than 40 dollars using your inconvenience fill up fee listed below the fuel chart on the contract.

the manager at this location that assisted me, was helpful and awesome. i highly recommend her. also the rep, that i spoke to on the phone, patrick, he was solid and helpful. HOWEVER, i had my reservation changed by uhaul the day my truck was scheduled to be picked up, adding about 30 miles to the pick up commute, which was estimated originally to be about 30 miles. so i pretty much ended up paying double what was estimated. on top of that, instead of a 24 hour window for moving, like i had planned, uhaul reduced my reservation to 19 hours??? how is this even allowed?? i was in a rush the whole time to because of this instead of taking the full 24 hours to move like i had been planning. however, after hearing a lot of similar experiences from friends and colleagues and dealing with this, i'll never do business with uhaul again.

No comment. The staff member was very helpful, considerate to my needs. First rental experience with U-Haul. Could not have asked for better assistance.

Personnel went above and beyond to help me. No improvement needed.

I was so impressed with the truck and the folks I dealt with were kind and friendly.The whole rental process was perfect.I would recommend Uhaul.

My experience was spectacular. The sales rep. explained the use of the product and was clearly knowledgeable.

The Lady working the desk was amazing, knowledgable, and very adept at her job. I recommend that the owners give her a raise and a weeks paid vacation.

Everyone was extremely helpful. Best experience ever and super helpful!!!!

Everyone was very friendly and helpful.

you kept moving me to different locations irrespective of my start time.

Hire me to do surveys ??

It was a pleasure to do business with Christy Heavener Dowdy at Town Center Storage in Dublin, VA 24084. She was very accommodating and helpful to my needs. She has a great personality and disposition, and represents your company very well!

Love the fact of a pull thru storage space.

The only place to use for storage. I will drive out of my way to use this storage facility.

I'll be back in the spring to store my boat.

LOVED having our stuff stored here. The staff was always sweet and helpful. I could access it anytime I needed and the premises was always lit and clean!

I would highly recommend Town Center Storage! Christy is awesome! We would definitely use them again!

Very helpful and friendly! Told me about lots of options and easy payment plans

The office person was very helpful. This is a clean and secured facility. I would recommend this place to anyone who needs to have a storage unit.