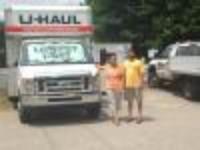 Communication was poor. We were double charged.

When I arrived neither employees were wearing masks and they did not put masks on while I was in the office.

Everything was great, quick and easy.

They really go the extra mile to take care of me!

This was probably the friendliest and easiest rental and return we have ever experienced with UHaul.

it is not the location that is the problem it is being able to locate one close to home that has a truck and people that know what is going on. I was told u-haul does not transport trucks to a location. I needed a 15' truck and the only one in palmer ma was rented. the location in Belcher town was a satellite location. Not only did it take me forever to find a store location but they when the truck got there it took them forever to get the computer system to work to update the miles on the truck so I could take it. The people at this location were great and kind. they new what to do the system just wouldn't let her do it. Truck return was fast and easy. they did a great job getting us all back in at the same time.

I as the customer was charged double for everything because I kept the truck for a bit longer than expected. This is the first U-Haul location to ever charge me that much extra. What was supposed to be a $50 truck turned into a $120 truck.

I am happy to bring them all my business! They are great to deal with!

Great service, had an effective Covid-19 protocol in place. It was a pleasure doing business with them.

This is the 2nd (or 3rd?) time I've rented from them & they always are so helpful! The customer service is friendly and swift. They want to make your experience with them a good one! It's my go to Uhaul place!

The people that run this location are truly wonderful, they are professional and accommodating. I realized once I got there that the original van I rented was going to be too small and they were super helpful with switching it too a bigger vehicle. I would highly recommend this location.

Unfortunately, the radio was unable to pick up local stations, including 100.1 WWFX.

Very nice people to work with. Would use again. Lots of inventory all sizes where avabile

This location was great. However the online scheduling was a nightmare. I had originally booked a truck in Putnam CT for 230. Received confirmation and as I got to the location I received a call that there was no vehicle available and the closest rental available was Tolland CT. 30 minutes in the wrong direction. I called frantically and this location saved me.

Do just what you are doing . Thank you for helping my family. Highly recommend your business to family and friends. A very satisfied customer *

I was not the person who rented from you someone used my email.

Charged my credit card for damage that wasn't there. No masks were worn, van was filthy and I did not cause any damage!

Nothing, maintain existing level of service & its a home run!

You can't have someone sign one contract then 3 days later (after its already been returned) try to right another contract and try to fraudulently double charge someone's account.

It was difficult to determine how many gallons needed to refuel appropriately. I used the guide provided by uhaul and even so ended up adding more fuel than was necessary and therefore paid more than I needed to. Not cool

Friendly, available when you had questions. I will do business with them again! Thank you

I was very pleased with the customer service, check-out and check-in process.

I would like to say the woman that helped me was very nice and extremely helpful.

I LOVE THEIR COSTUMER SERVICE! I can't say it loud enough. You can actually have a conversation with them. It's the greatest yet most important thing when it comes to customer service TO ACTUALLY EXPERIENCE CUSTOMER SERVICE!!

Easy pickup and drop off even during pandemic. Friendly and helpful. Did not have a chance to check vehicle with lender at drop off but understandable. Reliable

I was greeted by unfriendly man. Then wife took over. Extremely long wait for clerk to figure out why my collision waiver went from $11 when I made the reservation, to $20 at time of pick up. Eventually she told me "corporate increased the rate" Unacceptable change in reservation! Agent explained that scratches inside the van are not tolerated. This is unreasonable. The signs inside the van stating "You dent, you pay" are rude! The experience was unpleasant and Uhaul was not committed to the collision fee on my original reservation.

Although I completed all forms on line, took me over 20 minutes to pick up the van and the return took over 30 Unsafe environment, employees not wearing masks

It was Icing on a cake. I will always rent here now. She gave me her cell phone number for next time I need a rental. I will always go here. I happy with the small uhual location. the busy location always seems to think they do no need customers.

Excellent customer service! Extremely pleasant owners. They take pride in their business and it shows. My rental was a great experience. No surprises. Vehicle was in top shape. Very clean and ran well. Ty!!!!

Love the service here. Nice people from the beginning. I always use this location because of the friendly service

Terrible experience. We chose to do a non-contact U-Haul truck share in order to transport a mattress, but when we arrived to the site, the man running the truck share came up to me without a mask or gloves on and angrily asked what we were doing. When we responded that we were picking up a truck for the day, he grunted and walked away. The truck was not parked in the location that it said it was in, and the keys were nowhere to be found. We ended up having to ask the man for the keys while he was having an argument with another one of his customers. The truck that they gave us had a broken headlight, scratches and dents on the inside and outside of the truck, and had questionable brakes that would squeak anytime we used them. When we returned the truck to Sun Stores, the man quickly came out, had us back the truck in an awkward and difficult location and took the keys away from me, all without a mask or gloves on. I had to go into his house to ask for the keys again so that I could complete the steps in the app in order to properly return the vehicle. His wife handed me the keys, but the man followed me and continued to ask for the keys back while I was trying to complete the steps. It was an uncomfortable experience. Then, we received a $150 damage charge for a mysterious scratch on the inside of the truck. The scratches were already inside the vehicle, and the one mattress that we moved did not cause anymore. I wish I had looked at the reviews for Sun Stores, because it looks like the "scratches on the inside" damage charge is a common occurrence. This is certainly a scam and you should avoid using Sun Stores at all costs.

Owners are very friendly & helpful. In spite of reserving via 24/7 check in, owner (who lives on site) checked me in/out in the office (in less than 15 minutes, so no complaints on mybend). Truck wasn't the cleanest, but it ran fine, so no complaints there either. Location is a little weird (dry cleaner, hair salon & Uhaul rental in same office), but easy to find. Plenty of on site parking. Owners will require you to back the truck in upon return, but they helped direct us.

Staff was very polite and courteous. Picking up my rental was a breeze.

The equipment was ok, pulled ok but was squeaking the whole time. The trailer was pretty beat up but it's a trailer so it's fine.. one real big drawback was the fact it has no way to rase the hitch to the trucks hitch, so you have to lift it, and it was heavy.

Unless you change your privacy policy, I will avoid using U-Haul in the future. I started getting spam within minutes of placing my reservation!

I liked the electronic drop off system but the people who owned the location came out to take the key from us. They weren't wearing masks. Defeated the purpose of electronic key return. But they were very nice.

The couple that own this business are very friendly, professional, and went above and beyond to meet our needs. This is the third time we have rented from them and have been extremely satisfied each time. ?? I would highly recommend them to anyone.