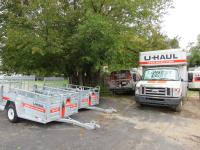 Had some issues with my truck's electrical hookup for trailer's brake lights and turn signals. They helped me trace the issue to a fuse on my truck. It was VERY cold outside but they patiently helped determine the problem for me. Thanks

Easy to drop off and the site was accommodating.

Allowing the individuals in person and over the phone to use the technology available to them to pull up a list at the ready upon request of options for places to return the truck.

Dominic the owner treated me so well and was so professional! It was a great experience. I will ALWAYS go back and rent from him. Thank you very much!!! Austin

I appreciated the ease of renting the U-Haul truck from this rental center. The U-Haul staff were very friendly, polite and efficient. It made my moving day less stressful. THANKS!

This location and the whole experience was excellent. Very friendly and helpful staff. The only issue I had was using the uhaul after hours online check in. It would not let me use the location feature to start the process.

Owner was very pleasant. Equipment was clean and well maintained. This is the only u-haul location we will use in the future. Thank them for us again.

So due to detour of flooding my return late by 2 hours but during open hours same day is charged full 2 days with no warning before or as i checked it back in. Uhaul should be ashamed on a full extra day. Horrible customer service shame on this transaction and this brand

They were friendly be helpful the entire time and will return for future business.

Great friendly service at pick-up and everything went very well with the rental and moving. My Thanks!!!

I'm will never rent for uhaul aver again. I was sent to a location close to my home and when I got there the place closed early and i had to call the 800 number which they transfer my call multiple times and when i finally got someone that could help me they sent me some where farther and when I asked if I could drop it off back to the original location they told me I had pay extra. I told them that it wasn't my fault and the lady on the phone was not customer service oriented nor she wanted to work with me. Really bad experience, I will fe now on rent from local companies.

I had nothing but issues with renting from UHaul this time and the customer service reps were horrible! I called to verify that my truck would be available and was told they would not have that size truck at that location. I spent over an hour on the phone with three different people from Uhaul to get a truck and that last person a supervisor told me that yes the truck would be there. I ordered moving pads and they didn't have any to give me and told me I could drive somewhere else to get them. WTH!! Again when I called to complain they offered me a $10 VOUCHER to use next time I need a truck. Really after all this I won't be using a Uhaul service again. When I called to complain about not having furniture pads the csr stated I don't show you ordered them. I replied then how did the man at the desk know I needed them when I picked up the truck and told me he didn't have any. No one knows what they are doing!! It was a bad experience.

The after hours drop off online was difficult to use and frustrating. I never had to do that at other locations and I didn't like it.

Everything went as planned. Thank you.

They made the process very simple. Extremely polite staff.

All the questions were about the location and cleanliness of the equipment. Which were great. The issue is The description of the size of the truck was definitely wrong. It ended up taking us THREE jam packed trips to move the items for a 2-3 bedroom house. Thank god we only were moving 6 min away. This allowed us to make these extra trips within the allotted time, but would have been very difficult had the circumstances been different. Also the accumulation of â€œstuffâ€ was nowhere near what the average family would have. This description should be changed or it should be mentioned that it does not include garage items. Etc. very disappointing in that sense.

The truck that I rented needs an alignment badly. It pulls to the right which could make it difficult for some drivers to control. Not a complaint, just a suggestion.

We reserved to pick up in our town, the reservation changed to a town abt 11 miles away- without our approval. This change, at $1.19 per mi, cost us approx $25. Additionally, the truck leaked. We had items damaged from the water. These damages have yet to be determined. The staff at both our desired location (Ivanhoe) and the location we ended up (Lakemoor) were polite and professional.

Great people and great service! Everything went quick and smooth!

Nothing, the pickup went great. The gentleman that help was super helpful and friendly.

Everything was perfect and professional. Second time using and will again in August. Also love that is close to home! Very friendly personnel.

Was unable to hook up the trailer due to my vehicle. They said there would not be a charge. There WAS a charge. Called THREE times to get a refund. Still no refund. Calling uhaul directly now.

Ordered trailer online. I have been sent confirmations to pick up trailer at different locations but usually close by. I had plans to be on the road much earlier than I did. A day before my pick up I get an email saying where to pick up trailer. It was 21 miles away. I literally drove past 3 uhaul dealers. Maybe you should stop the online ordering since you can't give reasonable time to someone and a closer location.

I requested a trailer 2 weeks in advance at a location near my house and received a confirmation. You moved my rental to a location that is 40 minutes from my house. This is totally unacceptable, and I will NEVER use your on line system again.

The whole process of reserving the trailer was a nightmare called into Uhaul 2 and was on hold for over 20 each time. Made the reservation online at one location and was directed to another location that was 20 min away. Why let you make a reservation at a place if they know they don't have what you need?

Very friendly and easy to work with

I reserved the truck 2 to 3 weeks prior. I called day prior to confirm location, time. I received confirmation email after call. The day of rental I received a text 90 min prior to my rental asking me to confirm. I thought that was weird since I already confirmed. I called the number, it was a different location. I gave the guy my name and asked what happened. He said he didn't know, that he's just a dealer. I called the original location spoke with manager. Supposedly the truck had check engine light on. I called the dealer at new location, confirmed I was coming but since I needed a ride now to get there I would be 15 min late. Once I get there someone is in front of me renting a truck. I asked the guy who's name is Devon if I was in the right place and let him know I am the one who called. He said he didn't have my name in system. I showed him my reservation number and all of a sudden he finds it. He was renting my truck to someone else. If I had been there 10 minutes later it would have been gone.

Great place to work with. Everyone there was very nice

Vehicle was not clean and smelled really badly.

Confirmation and pick up was confusing. But the guy who helped me hook up the dolly was very knowledgeable and helpful.

TRAILER OVERHEAD DOOR DID NOT WORK WELL. TRAILER CAME OFF HITCH WHILE GOING DOWN THE ROAD

When I picked the truck up, the location claimed there was more gas in the truck then there was (contract said 11/16, was 9/16 of a tank), I had that corrected by Dominick. I used gas down to 1/2, went to the station near the location and put gas back in to 9/16. The chart I was given said I should add 1.5 gallons, I added over 2 gallons. When I received my final contract, I was charged for 2 gallons of gas. I called Uhaul, the woman I spoke with credited me, but had to add that I was wrong because there was only 1/2 a tank left (even though she did not call or check on what the location reported). I then called the location, where Pete told me he checked it in and I could come look at the gauge if I wanted. I went to State Rd Auto, turned the key, waited a moment, and the gauge was at 9/16th. Pete was still claiming it was at 1/2. He was also trying to say that I should know what the gas mileage on their truck is, but was not provided that information. I went by what was provided. I have a picture of the gas gauge should anyone want it, I did email it to Matt Raddaz, he is out of the office this week, but he is somehow the contact for me if there is an issue/dispute. The picture I took clearly shows the gas gauge at 9/16th of a tank. I will not be renting from Uhaul ever again as I find the representatives of the company to be dishonest and this process easily taken advantage of by Uhaul and its representatives. I will also be telling everyone I encounter about my experience. If you want a suggestion on how to keep this from happening, have a full tank of gas in the truck when it is rented, then there will be no disputes over how much gas was needed to be in the tank when it's returned. Seems to me that State Rd Auto likes to underestimate how much gas in their vehicles or their employees simply cannot see a needle on a gas gauge. The latter seems unlikely as they are mechanics.

Very professional in handling my needs. Nothing I can say to improve my experience with this facility.

Well to start I was guaranteed a van but when I got there there's no van available??. Also person at shop spoke to Michael from uhaul he said he'd give me a discount on Miles. Said he had a stupid ? When I asked for different trick on lot??. Shop never came out to look at miles/damage. Then not only did I pay regular rate for miles but was overcharged by about 8 extra miles. I expect a full reimbursement of miles charges.