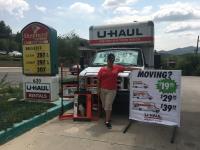 The attendant was wonderful. Her gas station needs updating

Comments: Property is an old gas station with a very unprofessional appearance. Run down with political signage everywhere, including in the barred windows of the little shack they work out of. Irregular and inconvenient hours. Only one person there who is trying to take payments for gas while helping you with your rental contract at the same time, making it a rushed and distracting process. There is no indoor office space, so you can expect to have to stand out in the cold or heat while they juggle other customers to help you. The uHaul truck itself was good. I've rented a number of uHaul trucks and trailers over the years. I'm renting another truck today (two days after this past rental), but I'm using a different location this time. It's just not what I expect from a uHaul rental experience.

Nothing needed to improve. The site was at a perfect location and the attendant helping me out was very friendly, kind, professional and helpful. I would definitely recommend this site and would rent from this exact location again.

Listen to the phone message at the Montezuma location. It is long and political, endorsing a candidate and supreme court nominee. It is unprofessional, offensive and inappropriate. If I had heard it before reserving they would not have had our business.

The attendant was lovely, efficient and knowledgeable. The service station is well kept and the trucks are in excellent shape. THANK YOU!

Great attendant. Made picking up the truck fast and easy.

Nothing. I was very happy.

My contact said to off at this facility which I did on Saturday. They couldn't find their own truck and proceeded to Bill an additional three days even after I told them where it was A lot with no attendant and a drop off box. I have no intent of paying for the additional days. Not to mention I originally ordered a 26' truck and the night before our move I received a call for a new pickup location and apparently only a 20' truck was now available. This was just horrible customer service

I'm hearing impaired and informed the agent of this disability and requested that the agent please speak up. I asked her twice and she said â€œI won't yellâ€ and then she hung up on me. I did receive a text from her that answered my question. Upon arrival at pick up point, it was rather disconcerting that she had a machete in the office, was busy with â€œblack lives matterâ€ signs, and was watching TV on her PC. I found her difficult to work with (she was amiable to my male friend) and told me that if I gave her any more attitude she wouldn't finish the paperwork). I had my male friend finish up with her as there was definitely a disconnect with her and myself. We couldn't get out of there soon enough. The truck was filthy inside, including some type of beverage all over the passenger side windshield (inside), making it difficult to see.

I was charged for "Safe tow" which icing agree too.

Joanne 50015 was amazing!!! She loves your company and is a fantastic representative for U-Haul!! She really deserves a company recognition award for her loyalty and great customer service. I had a wonderful rental experience because of Joanne!!

The person who we interacted with was very adamant about telling us how we did not hook up the trailer correctly.

Frankly, I do not know if the issues are with the location or U-Haul Corporate, or both. 1) When I picked up the van, I declined the Van insurance (CDW). The location owner said she mistakenly added it to the contract. She asked if, rather than going back through and crediting the contract and re-running all charges again, would it be ok if she credited it back to me, when van was returned. 2) Owner left the location before 5p on the same day (closed it early) and was not there when I arrived to return the van. She then showed up for a couple of minutes and told me to use the app to return the van...and then immediately left. 3) She did not credit back my CDW. In the U-Haul app it asks if I agree with the charges, I said "No." It said that someone from U-Haul would contact me within 24-48 hours to discuss my bill. 4) No one ever called me and I received an email with my bill that had been charged, improperly. 5) Not only did I received the incorrect bill and note that my credit card had been charged, an entire extra day of charges (including the improper CDW charge) was also improperly charged to my credit card. 6) So, without contacting me to discuss the CDW charge, I was charged for something that I declined AND was charged for an extra Day. I have proof that I had the van back in time. No, I would not recommend U-Haul generally, or the this location specifically. I will be contacting U-Haul corporate to discuss the many areas where "the ball" was dropped. Sincerely, Louis Gilman

Keep your cell phone's location. Not recommended to return when businesses are closed.

precheck in. the mobile app is really time consuming to use and if it doesn't work, and the office is closed, you're out of luck

I went two days early to pick up the online purchase of a mattress bag. The office was closed due to the pandemic. I called the office I was to pick up the truck I had ordered online. She said because the purchase was placed through the other office, she could not give the bag to me. She called back the same day and said she would stop by the office to pick it up and it would be with the truck when I picked it up. Had I know this was not going to happen I would have had one day prior to get a mattress bag from somewhere else. But I arrived the day of picking up the truck, and not only was she late arriving but that is when I found out I had no mattress bag. She said she would go pick the bag up which she did but by the time she got to my place to deliver. I was all packed up. Very irresponsible manager. I now have s mattress bag. Unused.

This doesn't pertain to the location of rental, but to the fact that u-haul advertises these trucks as $20 per day. THAT IS FALSE ADVERTISING, coming from corporate headquarters. I payed almost $120 for the day not $20!! and I even put 1/4 tank more gas than required, perhaps corporate could give me a BIG DISCOUNT next time???? the personnel @ shepherd's was quite helpful however:)

This is a small satellite shop that also pumps gas, sells filtered water and feels safe enough to leave the equipment unsecured. Operator Joann was marvelous. Over the years you guys have never done me wrong. LA

It was an exceptional experience. The truck is brand new and ran so smoothly. I would recommend this location to anyone.

Side mirrors were not adjustable. Seat belt adjustment on door jamb didn't work.

This operator is very unprofessional. She made several inappropriate remarks to me about my physical appearance that made me feel very uncomfortable. Not only was she unpleasant to deal with, she also charged me $10.00 for CDW coverage which I specifically declined when I rented the truck. Furthermore, the mileage on the truck upon departure was 2146 and 2150 upon return. Even though, I only drove the truck 4 miles, I was charged $6.75 for 1.5 gallons of gas. I called her and requested a reversal on these additional charges and was told she would see what she could do, however, no reversal of charges were ever completed. VERY DISHONEST OPERATOR AND A HORRIBLE REPRESENTATION OF UHAUL.

I was told I would get $40 back if I returned the vehicle in Tempe and I did not receive it. Also the tires were out of balance and the truck vibrated the whole way home

Actually returned car dolly Monday 11/25. Was not provided with a receipt. Was told one would be emailed. Still have not received a receipt for rental but just received one for $20 for an extra day when actually returned 2 days early.

The woman at the desk was incredibly rude.

Well Now! Where to begin? First, Joann was wonderful to work with and above average! Thank you Joann! Second, I have rented U-Haul trucks in the past which were always worn out and big slow dirty dogs to drive! However, the truck I rented this time was new, clean and powerful NOT at all like my previous experiences with U-Haul! Thank you!

This is small self-serve gas station with only a small building, with a window through which to do business. As the customer, I was outside in the wind. Although I had an 11:00 AM pickup scheduled, and the "Will Return Sign" in the window indicated someone would return at 10:30, I was left waiting until approximately 11:20 until a employee showed up. It so happens, I was already on the phone with a U-Haul representative when the employee arrived. Her reason for being late, "I was at the police department filing a stolen vehicle report." A good reason to be absent from the facility. Not a good reason to to leave a customer standing outside, without first making arrangements to have another employee ready to assist a customer, who had a scheduled pickup time. I will not use this facility again.

Joanne was very friendly, responsive and helpful. New Online Registering is good, but not enough info on what does/doesn't have to be filled out in the profile (Ans: fill in all categories). Rental Tax is 14%, way above what local Sales Tax rate is and UHaul isn't talking when I asked them. Also UHaul add a $1 environmental fee. Nice Feature is Uhaul will, at the end of the trip, automatically calculate best program based on your actual mileage and days. Saved me significant cash over the $19.95/day truck contract I initially wrote. Same truck, just cost less for my mileage situation.

woman was so fun and friendly-and made it easy-plus we got gas there too. much happier here in Az.!

Make sure the oil is serviced

Keep the rabid politics out of the workplace. It was extremely offensive. I'm telling everyone not to go there.

Trump much? Owner isn't shy about expressing her political views. Won't use her services again.

Very thorough, every detail regarding the vehicle was attended to before I could leave with it. Explained the rules the renter had to observe and the responsibility thereof. On return a repeat of observation on the vehicle and rules bearing on returning.

The agent in Prescott was absolutely fantastic

The woman at the location, was very helpful and very nice and professional. The process was smooth and easy getting the truck.

Stay friendly and helpful she was marvelous!

This site is small unattended gas station. There is no guidance on where to park. The only upside is that if I wasn't already at contracted fuel requirement I could do it on premises.

Drop off site was closed. I received a call from the representative that the truck had been received and everything was fine. A short while later she called back and said there was a problem. The mileage had gone over. There had been an accident on the freeway and all traffic was detoured. She said I should have told her about this on drop off, but she wasn't there. She said she would work on it, but I needed to pay the additional $6. because someone was waiting for the truck. I've never heard back from her.