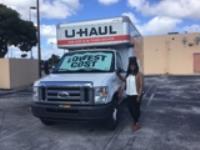 I got to the location for drop off and she told me "the owner isn't here you will have to drive it to our truck lot" i had to drive back 15 minutes, in the direction I had just drove from to leave my truck. I had to wait in the rain for her to meet me at the lot after moving all day! Then they charged me 5 dollars, im sure for the extra mileage it took to bring it to the lot! Seatosee was dirty and the lady was eating chicken nuggets as she talked to me.

I was overcharged and my return date, time, and mileage is incorrect.

We got there an hour early and she said come back in an hour. When we came back they don't have the trucks there. We followed her about 4 miles away to get truck. It still had garbage in the front and the back was not swept out from previous person. They forgot the blankets and dolly we ordered so we had to go back to there main office to get those and then only got 6 blankets not 12. They are very nice people juat not a very well run u haul. I would never go there again. Caused a lot of delays on moving day

Met at a location different than listed. Was told because it's further away - they would add miles to make up for that. Was also told that there were missing blankets from my requested amount. A few weren't an issue. But it was almost half.

This location is in a very sketchy part of town. It seemed like there were people sleeping/living inside the uhaul facility within this strip plaza. Something seemed shady and I definitely feared for my safety in this area.

Great attitude and went above and beyond

Close this location. It's in the worst neighborhood in West Palm Beach, so dangerous that the proprietor keeps the door locked and you have to wait for them to open it. We asked several times for the upgraded insurance, she said she gave it to us (she did not). Figured that out later, and after a bunch of running around, finally got her to process the correct insurance. She was also more than 30 minutes late bringing our truck (from a separate lot, which was also odd). We were 30 minutes early, which meant that we spent over an hour in a super dangerous area. We almost left entirely, but when you're trying to move, you're on a timeline. The truck had serious transmission problems and was literally glued together. We were surprised we made it on our 1500 mile trip. Better equipment, better personnel, more professional locations, preferably not where your customers feel like they're going to get shot or kidnapped.

This was a new location and my first experience and it was beyond professional, clean, and delightful. I would recommend this location to anyone and will use them for future services.

At the 45th Street, Flea Market location, do not change a thing, Ms. Opal was very curious and went above and beyond to assist me.

Ms. Opal was wonderful to work with.