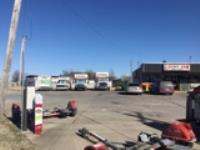 Equipment I had ordered had not been prepared, I couldn't contact them by phone and they did not have all the supplies I ordered.

Go back to call center. And train your staff I Fort Worth on Alta Mere on how to clean and give customer service. Uhaul is extremely lucky I don't get an attorney to sue for the physical pain I endured on the wild goose chase and and unhooking car dolly and have to pack due to run around. Store at Archer witnessed all.

Make sure the store your renting the equipment from isn't keeping your deposit and then your being charged for stuff you've already paid for...

This place was not good. The guy behind the counter knew nothing about the rental and after 20 minutes waiting I finally just said here are the keys and walked out. Also, the area is very dangerous and I will never go back.

It was a worn gas station 20 miles way north of town and it was about as far away from where I lived as it could possibly be.

This was one of the worst experiences I've ever had with a Uhaul rental and I will never use a Uhaul Dealer over a Storage and Moving location ever again. First of all, we use a corporate account and the woman who assisted me was inefficient and continuously gave me contradictory information regarding where I could pick up and the sizes available (we needed a 20' truck, but she was unable to find anything but a 26'). Second, our pick up location was terrible (in a gas station) and the man assisting us was the only person there, so it took well over 30 minutes and was a severe waste of time. When we finally received the keys, he asked me to "make sure it starts." I asked if he was concerned that it would not and he exclaimed that it was having issues. He was willing to allow me to drive a large truck, out of state, while knowing it was unreliable. Because it was the only one available and the corporate accounts rep was unable to find another truck, we took it anyway. This was a huge mistake and the truck died on us multiple times while on the highway (at least a dozen times, honestly). Lastly, when we checked the fuel meter, we noticed that it was well under 1/4 tank while the contract stated that we needed to return it at 3/8. When I informed him of this, he acted as though we were being dishonest.

This location was unprofessional and unhelpful. Was mislead about my purchase and what needed to happen for my return. Need to have trained individuals servicing your clients.

Scary location!!! Nice guy running it, it was slow because it was a convience store n he had to wait on those customers.

When I call in to get a estimated price I was told 350 and once I came to pick up the Uhaul I was charge 450 and that kinda put me in a bind cause I had to purchase the the truck cause I had to move my stuff that day but coming off the xtra money had place me In a bad situation.... not to mention the truck burned too much gas...

Was a little hard to find. No signage to tell where it is.

Truck was very nasty. Full of mud and feces and trash. Also old lumber. Wakeboard was broken and unusable.

The person who helped us was amazing!!!! But the location itself is awful and in a dangerous part of town :(

not recommend U HAUL

They did not have pads. Truck was not clean. Had to wait for 40min to get the truck.

When I went to the counter to let the store staff know about my reservation, he was rude and told me that he was busy with other customers and being that he was the only one there, he had to go through re-entering all of my reservation info onto his computer (which I did when I made my reservation). Then, I explained that I had previously spoke with 2 people over the phone and explained to them that I would need me vehicle loaded on the car carrier when I came. After the unprofessional checkout, the car carrier was not attached to the truck, so he had help from another man to put attacher the car carrier to the truck, which too over an hour because there was trouble gething it to attach correctly. Overall, my experience was not pleast with my pickup reservation and checout.

Being that the location was a convenience store i had to wait 30min, as the cashier, being the only worker, helped his regular customers

In a very bad part of town, facility was fine but, location was so bad my wife stayed in car with doors locked

My original pick up location was horrible. He didn't know what he was doing. I've rented from u-haul many times and this was the worse. I was suppose to get a packet to keep in the truck that tell my miles, my gas, and numbers in case of emergency. I didn't get that. He did check the truck. He said it should be full and it was on half a tank. When I told him about it. It said there was nothing he could do. Gave me a number to call and told me to take the truck. I had to switch trucks and the worker that had the truck was not present at the location I was sent to. The drop off location I was to go to said they can not accept the truck b/c they already had that size truck. It was horrible communication and professionalism.

Very polite and the process was very quick.

It was a small convenience store in north Tulsa, there was only one small u-haul trailer on the site, one young man was working the convenience store, gas station and trying to help me, he did not unhook the black straps correctly that held my tires firmly on the trailer, when he told me to back off the trailer, and the incorrectly removed straps popped the bumper off my 2013 Mercedes, I am now battling with U Haul and their insurance company to even see if they're going to cover this

Store attendant did not know what to do. Finally suggested place to place trailer. Acted as if customer was a nucence. I will need to rent trailer again and I will strongly suggest not to drop off at this location. After looking at map there were 1/2 dozen closer locations to the 74133 zip code.

Make sure ready to rent. Took 45 minutes just to get truck didn't show it just gave key. Rear brake light half out. Then rude at drop off

not the most eye catching place, doubled as a convenience store so very busy. Young man who checked me in was very personable and helpful and went out of his way to accomodate me since that wasn't the planned drop off spot and I didn't have my paperwork

The customer service individual did not know what he was doing half the time. The rental did not include the dolly and the furniture blanket requested in the order. The vehicle drove like it did not have shock absorbers and in need of serious maintenance. At or about 55 MPH the vehicle seriously shakes and shimmies.

Had to wait to check out uhaul ever time a convenience store customer was in line.

1. Better train employee on how to fill out contract. 2. Make sure ALL equipment functions properly. 3. Make sure that all equipment that was RESERVED is available. 4. Make copies of contract more legible and easier to read. 5. Make pick up location closer to point of use.

The location was out of my way to a bad part of town the saving grace was the person who helped with the drop off. The communication between Uhaul and the drop station needs to improve. The attendant was helpful although not well informed as to my arrival and I am sure there were other locations closer to downtown Tulsa were I am staying instead of across town in an impoverished area.

No worries on turn-in. They took care of eveything wonderfully.

Take a look at your online reservation system. I got thrown around from site to site because the online system reserves a truck without the knowledge of the local dealer. The local dealer rented the truck I had reserved. The traffic center was VERY HELPFUL thank you Jasamine and Kelly.