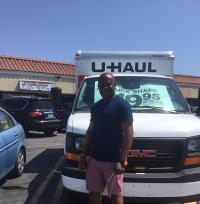 location did not provide any of the equipment I requested (furniture pads, dolly, etc). I had to wait 30 minutes for the owner of the store to show up and this is not the safest location.

Very Very Nice, Thank You! Met all my needs!!

Just make it clearer this is a secondary location with a big U-Haul sign like main U-haul locations have. They are very good people and should very much stay in the U Haul business (super friendly and helpful) but there needs to be way better signage indicating this is a U Haul pickup location, it's very hard to tell with just the small sign in the door of their shop in the middle of a strip mall.

The location to pick up the truck was tacky and uninviting.

The location given was extremely difficult to find, because(1) we passed it up before finding it; the address was note visible because it was not facing the street, (2), when we did find it, it appeared to be closed, because there were bars on the dirty windows, and no one inside could be seen. The interior of the establishment was no less than filthy, and when we did eventually get a vehicle, the windows were dirty, and the vehicle had a little less the 1/4 of a tank of gas. And, to top it all off, after we returned the vehicle on time, the attendant gave me a figure that was well beyond which was initially given me. When I questioned the amount, I was informed of an insurance charge of around $15. or more dollars. When I told him I had proper insurance, and asked him why didn't he ask me as he was doing the paperwork, he just smiled, and told me that's the way it is. I Have rented vehicles from you in the past, and the insurance question has always been asked before completing the necessary forms. Something is seriously amiss, and needs to be seriously dealt with.

This location we so poor I cannot even put into words; the gentleman at the counter could not even complete the transaction; the location was filthy and left me very apprehensive. I would never use this location again nor recommend them to anyone.

Train your vendors you do business with properly. I picked up my truck at one of your vendor locations and was told not to return at the same location because they would be closed and to bring it to your universal location in Gardena. When I did bring the truck to the Gardena location I was told I was going to be charged $200 for not returning to the same location I originally picked up from. I was told to park the truck at the Gardena location and keep the keys and then return that Monday at the vendor's location during business hours. My friend took the truck back to the vendor's location and was told by the vendor once again that he did not want the truck and he could not leave it there. He was also told that I would be getting charged for three days. I called the customer service number and was on hold for ten minutes, then I was told that the truck could be dropped off at that location and that I would not be charged the $200. I am so disappointed and disgusted with the ignorance the vendor possessed. This was my first time using uhaul and I must say I will never use you guys again. Training needs to be implemented and heavily focused on.