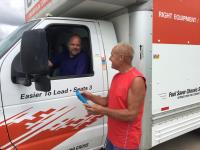 I had requested a 15 foot truck after I saw that this place had 3 of them. The rental website said he only had a 10 foot truck. When I picked up the truck the 3 15 footers were still there. This made my one way move back to Texas a nightmare to load and upload without a ramp.

Your retirn app is buggy and requires to much effort to use. Will not come back.

Had to return online. When asked if vehicle was clean for next customer I answered NO because COVID-19 protocol say Clean. Then I was charged $25. What a shit hole of a location.

Rick was very helpful, and called me a day in advance to assure me the equipment was ready.

The issues I had were not related to this location it was the original location and the uhaul representative he was dealing with in Newton.

The attendant (owner ?) was quite pleasant.

I'd used online check-in, and already uploaded my license, but it still was done at the location. If that's the case, don't ask me to check-in early.

Very friendly and easy people to deal with. Perfect Transaction.

The location we picked up and dropped off was run down and fallen in. We rented at 26 foot uhaul for 42 hours for milage of 230 something and was charged over $430. We rent uhauls monthly. And would think they would get reoccurring customers some kind of discount. The uhauls we rented ran like hell and we kept our fingers crossed during the whole me the truck wouldn't break down... For an over $430 rental fee for only 42 hours the truck should be running flawlessly.

The clerk at the Grinnell store was super helpful, and did whatever it took to fulfill my order, despite several mistakes at the reservations desk, and despite a very bad attitude of a lady at that reservations desk. I asked to pick up in Newton. Reservations emailed me to pick up in Grinnell. Before I left for the store, I called Newton to verify pick up location, and Newton store told me Grinnell. I drove 20 miles to Grinnell, and was told there that I was supposed to pick up in Newton. The store clerk called Reservations, and the woman at Reservations gave him attitude that I was wrong and I needed to go to Newton. Fortunately the man at the store was level headed, realized he had the size truck I had ordered, and he completed the additional paperwork needed to fill my order right there at his store. The store is a prior service station, now in extremely run down condition, and the clerk informed that he was leaving due to some major medical attention he needed. For these two reasons I would not recommend the Grinnell location. Later, I discovered that Reservations had also messed up my drop off location. I had requested Manassas, and was given some town over 120 miles away. Fortunately, one call fixed that.

Rick is awesome and always helpful and extremely friendly. Would recommend him anytime!

A little bit of a task to get rental back into a spot for return. But other than that an awesome experience.

It went well and the Uhaul in Grinnell was great!

You are making the app rental experience too cumbersome. It may be worth dealing with if I rent in a high volume area but for remote areas I'll not bother as it's too much of a pain.

Super efficient and friendly! Rick was a superstar. Highly recommended!!

Nothing! Rick was fantastic!!!

Was not quoted full price was forced to buy extra insurance even though my umbrella policy would have covered everything also was told I didn't need a deposit with debit card I walked an hour and a half to get U-Haul then had to run back and forth the highway to use several atm and pay several atm fees to get all cash I knew tax would probably be adding on but 177.00 more then expected to pay made moving really hard and to refuse to let me have the truck without the extra insurance was ridicules

Rick Barnes provided outstanding service with our recent rent of a U Haul moving van....can't say enough about it. Everything was great!

I just wish it wasn't so expensive.

Would be nice for the trailers to have a Jack stand.

Facility in very poor condition, but the service was excellent!

Trailer was ready to go when I arrived. Service was great and I was hooked up and on the road in less than 10 minutes!

Every time I have used this U-Haul has been a great experience. Nicest guy to deal with. Best by far service.

I called on my reservation for the u haul but let them know that my son in law would be picking it up. They were very pleasant and guided me through all I needed to know. I will use them again.

Friendly and helpful staff! Would definitely use again.

I've used uhaul before, at this location and it's always a welcome place!

The staff was very helpful and are very good! Keep up the good work.