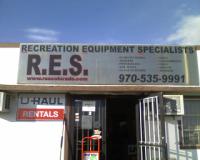 Out of the way for almost every major community in the area. Had to travel 22 miles to pick up truck.

The operators of this location were very welcoming and very easy to work with. We will be using them again.

When my husband set up the rental, he put the app on my phone and set it up to pick up the rental with. When I got to the location, I couldn't use the app and had to go through the paperwork once more. Also Google maps shows this place in the wrong location, so we spent a while just looking for it.

Staff was friendly and helpful

The lot is small, but the owners were friendly and the place opened on time, unlike my last experience. Definitely would use them again.

Your central reservations needs to be able to view non corporate locations. The 800 # was going to have me drive 30 minutes vs the 5 minutes

I do not belive the service of staff could be improvef on, effecient, friendly, professional. The location somewhat remote but apoears to be functional

It was perfect. Uhaul does need A rate say for just 6 hrs of use or so for those who do not need full 24hrs. It could be just like 10 dollars less. Also coupons that say give u a discount .

Extremely helpful and courteous. Made the return easy and quick.

Have the trailer at the place where I reserved the trailer not 45 minutes out of the way.

They were fantastic! I was not the party to pick up the trailer, but the party who did was SO impressed and very pleased with the entirety of the experience. We will definitely be going through them again for future needs.

Took a long time to get organized.

The best customer service I've had in a very long time! They were helpful,kind,caring and awesome I won't go anywhere else. Thank you so much. Your forever customer Joe Stough

Bad location. I was afraid to try to enter the parking lot due to so many vehicles near the entrance. U Haul is clearly not their main business, and was not what I expected to find when I did a Google search for â€œU Haul Mead, COâ€ but that was the first location to show up, and I was not expecting there were multiple locations near Mead. This was actually NOT the location I had chosen to return the equipment to when I made my reservation, but they agreed to take the equipment and were very nice and accommodating.

These people were great. There is a location a lot closer to me that has a couple of trailer but no one was at the lot or office to help me. I called but no one called back. The location far south of town was very helpful as well. They didn't have what I needed but went out of their way to help me find it. 1545 main st longmont will never get my business or any referrals from me.

I had reserved 48 blankets for moving and when I picked up the truck, they only had 24. I had to drive to a different location to get the others. It would have been nice to know that in advance.

The guy at the call center lied to me and sent me to the wrong place but the first place got me to the correct location and those people said the new system was a problem but they were great to work with. GB

The people here were wonderfully friendly and characteristic of what I would expect in Colorado farmland.

Friendly and helpful staff. Will install the hitch if you need them to.

Rusty & his staff bent over backwards to accommodate my challenging schedule. I can't thank him enough! I will certainly go to this uHaul location if I have any more rental needs!

These people are very friendly. Once you got into their secure location, there is plenty of room to park your vehicle. They processed my return quickly and accurately and I was on my way. All in all, a great experience!

I'm not sure if I would recommend yet. I used them this time around, but they were closed when I wanted to return the trailer. Closed on a Saturday afternoon when everyone is moving? That's nuts. However, someone did answer the phone when I wanted to organize the return, and she was extremely helpful. So that was good. What I didn't really like was where I had to back in the trailer. She asked me to leave it in a non-secure area right next to their secure area, since they were closed. It was a narrow gravel drive, and I had to be very careful backing in. I also had to be careful to keep space for another trailer they knew was going to be returned by someone else that day, so I had to make sure I left room for them. Fair enough but... really? Also, since there was no one there to help, I had to improvise when it came to using something to hold the trailer in place while I unhooked it from my truck. That was fun. Thankfully there was a small log laying there and I could use that for a chock, and then a brace. But if it hadn't have been there... not sure what I would have done. I don't have chocks I carry around with me for these situations. So I'm not sure how I feel yet. They did process my return timely and accurately though, so I give them credit for that. I am returning a Uhaul truck to them later this week as well, and I expect I'll need to review them again. This next time though, I'll be going inside. :)

We pulled right in the parking lot and walked in and told them we are returning the he uhaul and we were told where to park it and they came out and helped us get it unhooked and everything.

My friend dropped the truck off and he said the woman who helped him was extremely nice & helpful. He was very pleased with our experience from beginning to end! Thank you

It was flawless and the people there are wonderful.

Everyone at the Mead location was very nice and knowledgeable. Would do business with them any time.

These are great friendly people. Very welcoming after a long two days moving.

NONE at all Was very pleasant experience, staff was very polite, courteous and accommodating I will be back to rent again you've gained a permanent Customer at this location THANK YOU!!!

Online reservation was easy and the follow-up call confirmed all of the information and pick-up location. Service rep was prepared for my arrival--in all took about 15 minutes. Well done.

Rusty was great put car on dolly made 1600 mile trip great. Thanks Rusty

Extremely upsetting experience. Our reservation was in Greeley. He stated he knew for 2 days it wasn't going to be there. He had absolutely no resolution. Had to call a resolution person. I stood there for 32 minutes. Someone could've called us the day before and transfered our reservation. This was absolutely unexceptable and the worst customer service in Greeley. The location in Mead made up for there with their GREAT service. The location in Greeley should NO LONGER BE ALLOWED TO REPRESENT YOU. Another customer of your s walked out because the truck she went in and personally reserved was not there. There should be confirmations and resolutions. Be proactive instead of pis sing people off. I have 20 yrs in customer service and this was by far the worst until we were diverted to another location.

Owner operator of place was very accommodating and was of great help he went above what was needed to complete the transaction. Made sure everything was as it should be.

friendly and knowledgeable. ready to go when I got there.

Very kind and enjoy the people that run the store