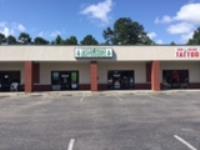 The key wasn't accessible for the online process and I lost an hour waiting for them to open. The truck was dirty inside and empty water bottles in the cab. The cab was old and not as easy to use as other newer ones. The ignition whined when started, the engine ran rough, the brakes squealed, the steering was loose and sounded like the fluid was low when parking. The overall ride was uncomfortable to say the least.

Charges were added to our bill. We did not use a dolly and did not ask for safe trip. That was a total of $15 extra dollars charged to us. Not happy about that at all.

nothing all went great

My husband and I arrived to the location at the time our reservation was and unfortunately the size we had reserved was still in use. The wonderful sales associate quickly offered us a replacement at no additional charge. The staff was incredible and the process was quick and a great value. Would highly recommend this location to anyone in need.

1 bright light and one dim headlight on the u haul. It was daytime so we didn't need them.

Nothing. Everything went smoothly!

None. Thank you to the lady that provided customer service at the store. Very professional.

I've rented Uhauls at many other locations and this was by far my best experience. Port City Outdoors made the process simple on pickup and turn in. Top knotch folks, keep it up!!!

Convenient location and service. Thanks!

Back was filthy I had to sweep out. I have pic of it. Very unfriendly atmosphere. I had to go in to have someone come out and walk around truck. She apologized for back being Filthy. I would hope to be compensated for the inconvenience. I reserved a 15 footer for 8:30 Am . When drop 26 footer off to pick up 15 footer nobody was there didn't see 15 footer there anyway so I went somewhere else. Would appreciate some type refund for the cleaning and having to go find 15 footer somewhere else ....

The staff at this location did not put priority in helping U-Haul customers. It was very clear that they only wanted to assist the people who came in their store for their products NOT U-Haul. They were not helpful or nice at all. They made us do all of the drop off things, like go take pictures of the gas gage and mileage because he refused to help U-Haul customers and made us back the van into where it was supposed to be stored, and he never checked us out. He said that was his wife's job and she wasn't there. Over all it was a really bad experience.

The location and customer service was very good. The issue was this location could not get the supplies I needed (furniture pads) delivered to them. I had ordered 3 doz a month ahead of time and the location indicated they only had 1 doz. He could not get the other 2 doz delivered to him so they were there in time for my move. I find this very unacceptable considering I placed the order almost a month ahead of time.

I had to go to 3 different locations to pick up truck, furniture pads/furniture dolly, and appliance dolly.

The experience was excellent overall. However UHAUL changed the pickup location three times. There needs to be improvements here.

Drop off was after hours

Confusion, did not check license or ask for any info. I told him I reserved on line. He said he didn't need any info. Gave the key and that was it.

owner/clerk had a very bad attitude "I hate Uhaul" and was on the phone the whole time with someone else about supplies. He did not walk me to the truck or do a walk around. Simply handed me my paperwork and said "you're all set"

Easy to find, easy to rent and people were great to deal with.

I had to walk twice in mud when I brought the truck back. I ruined my shoes and had to go barefoot while moving into my townhouse till I found another pair. It really was not a good experience at all and the truck has seen better years. Was very hard to drive because side view mirrors were crap. No next time just getting a second POD.

First of all, the location was not open when I arrived. My reservation was at 9am, with a sign on door that said they would open at 10am. I waited there till 1015am till finally leaving.

The truck we reserved not available at that location, so to compensate the rented us much bigger truck, for same price. It only had 1/4 ???????? so we filled it with too much gas, cause when returned was about little more than 1/2 tank

Good thing they stayed open late this night. I did the 24/7 pick up option and my key wasn't on the truck in the lock box. They had it inside because they forgot to put it out. The man was helpful and truck clean

Owner was very helpful and the truck we rented was in excellent shape. Thank you Port City Outdoors for making our move an easy one!!! Will recommend you to others!

Have half day rentals on trailers 3 and small trucks for local use.

They were excellent and very helpful.

Please be clear on the charges and handle it the day of return.

Excellent customer service, I use them each time I nee a UHAUL rental.

Thanks to Melissa she was awesome and U-Haul is the best!

Joe was awesome and very helpful with the whole process .

Always a pleasure working with this location

When we picked up our truck, the lady at the counter was very nice, she charged our card at time of pick up. When we returned the truck, there was a sign on the door be back at 10:30, so we waited a half hour. When the man arrived at the store he was unfriendly and acted as if we were inconveniencing him. He too charged our card a second time for the correct amount (we returned the truck a day early). We waited a few days for the first charge to come off our account as we knew it takes some time to clear, however BOTH charges went through, when we called, the same man answered and was very rude and stated there was nothing he could do about it. My husband complained that he was unfriendly and we would never recommend anyone to go there, after my husband hung up, the charge "magically" dropped off...VERY UNPROFESSIONAL, it's a shame because it was a nice store we would have frequented.

The truck was clean inside and out, but the windshield was filthy on the inside. I had no means to clean it so I suffered through the 300 mile ride heading west and when the setting sun glared on the dirt I was blinded.

clean the truck! inside box was a disgrace, I had to clean it before loading