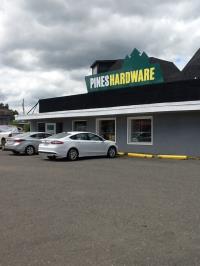 I had to wait over 45 minutes to get a trailer that was sitting in the driveway. No one was able to operate the computer to print the contract eventhough I had checked in online. They finally got someone to come in and then it only took 5 minutes. I feel that i should have been compensated for my time.

Incorrectly charged, visa was already charged agreed upon price, but I received email receipt indicating that trailer was returned 3 days late, which was incorrect, it was returned two days early, not sure what the glitch was. I contacted the guy (good guy/very helpful) who rented me trailer, and he informed me that he would look into, but have not heard back as of yet (2 days now). I have emailed uhaul directly.

Truck was very dirty, spilled coffee in cab had not been wiped up; windows were very dirty we had to clean them b4 driving the truck; no windshield washer fluid in truck, we had to fill that up. And less than half a rank of gas

stick with what the customer is told

Pinewood uhaul was absolutely perfect! Very friendly and accommodating, and great people all around. They saved us a lot of time because we were supposed to pick up originally on Gore st, then it was changed to Agostino's who did not open thier shop during the posted hours and did not answer thier phone. Would never recommend Agostino's uhaul to anyone. But Pinewood gets a 10/10!

6x12 trailer buried in the snow and could not even get close to it. Reservation made days before. Dealer did not have equipment to get it, All they had was a 5x8. Not impressed. A refund was to be issued and a deal on the 5x8 but without my knowledge was charged the most costly insurance. What a deal. Oh ya only the right side signal lights worked on trailer but told take it anyway, I only make 4 dollars on this.

I am not happy with my experience. The charge for a rental should be around $45 plus insurance and tax. I was charged $185 by the pickup and drop off point for a one day rental. The pickup point cancelled their charge but the drop off point has not corrected theirs. I called twice. I should not have to chase people to get my money back. Does every person who rents a dolly have to go this?

Proprietor almost impossible to reach by phone or in person. Very frustrating to try to organize rental. When picking up truck business owner was visibly intoxicated and working from his residence down the road from the business. Would not recommend this location to anyone.

Very visible on a main road and very friendly.

I would just like to know if it is now policy for the trucks to come with 1/4 of a tank of fuel. I have never rented anything before, and thought this was funny, but I never bothered to mention it. So I filled the truck at the same location I picked it up at, and it cost $142.00. I useed the truck for the move, and it only took 85kms, and a little over a 1/4 of a tank. So now I lost about 1/2 a tank of fuel that I paid for and never used. The owner of the location I picked up and dropped the truck off to said there was nothing he could do, but he would try to look into it. I think this is a poor way to run a business, but was told this is how it is done now, and that he "should" have told me to only fill it to half, but no one did. Why wouldn't it come full, then I would fill it after I use it and only pay for what I burn. If the owner of the pick up/drop off location doesn't come good for at least some of my lost money, or if this is the way your business is run, I will never rent another U Haul vehicle for as long as I live, and I certainly won't recommend it to anyone.