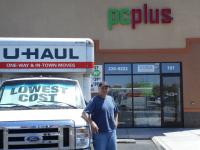 Rumzi was fantastic! What a wonderfully direct, pleasant and effective UHaul representative! I was impressed with the ease and professional way he did business. It was a pleasure!

This is a unique situation. The equipment and experience of using it and being billed for it were fine. The individual that I interacted with was pleasant and qualified. However, I will never, ever do business here again and I highly recommend that you don't either because it may kill you. The owner of the location, which is which operates out of PC Plus, continues to believe that the global COVID pandemic is a complete hoax (based on him personally not knowing anyone who's gotten it... he may not, but I certainly have,) and refuses to wear a mask nor does he require customers to wear them in his place of business (where there's a huge poster of Trump and Melania on the wall and Fox News blaring in the background.). His vehicles are not sanitized between uses. I encountered the same situation when I rented a truck from him in August and I reported it to numerous people at U-Haul, who promised to do something about it and which obviously never happened. I will now be filing a complaint with U-Haul again and also with the State of Nevada as what he is doing is illegal, because this is potentially deadly dangerous and highly irresponsible.

I was to pick up at 5220 S Jones because I have storage there. I wasn't informed, until I arrived, that the truck I had reserved wasn't there and I had to pick up at 4590 S Hualapai. I went to pick up the truck and NOT ONE PERSON WAS WEARING A MASK. This is a mandate that these U-Haul representatives chose to ignore. I had reserved a dolly with the truck. The attendant said they didn't have it, but had the larger and more expensive ones. There were many just sitting in the lobby. I asked if I could return to the Jones location where I have storage and he said I would be charged $108 if I left it there. When I returned the guy there, different guy and again NO MASK, said it was all fine and the $79 I was charged would be it. He had no idea what to do, could not get ahold of anyone else, and said â€œDon't worry about the miles, you're ok.â€ I was forced to drive further and charged the extra miles! I would like a credit of the miles from jones to Hualapai, please. The scheduling errors by U-Haul employees or representatives should not be placed on the customer. And when asked at the Jones location for bolt cutters. The girl said, â€œWe don't have them. But here's a company that will charge you $55.â€ So, U-Haul pays a company to cut off a lock every time someone defaults on their storage? That is ridiculous.

Great Job at This Location. Amazing!!!

quick and friendly service smooth clean ride what more can you ask for !!

I returned the truck with 7/8 capacity fuel but on my receipt I saw capacity 3/4 and they charged me $17.40 extra for fuel. In the cabin has fries everywhere.

The uhaul 24/7 share app is like dealing with dial up. Slow, slow , slow and then dropped. Frustrating to say the least. Service at the location was fine but the check out using the app was anything but fine.

They were able to locate the truck I needed quickly allowing me to move in a very short time frame.

No issues with picking up or dropping off from the location itself. Great location for where I was moving from/to! Plenty of parking if you need to leave your car there during your rental time. The only issues I had were with the online process of picking up and dropping off. There were a few things hiccups I dealt with that might be good to know for future renters to know, for example, having an alternate contact who would be answering their phone at the time of my pickup or having your passport on hand as an alternate form of ID or that the system kept kicking me out every time it asked me to take a photo of the odometer. I ended up having to call customer service and it took an extra 25 minutes to get through the checkout.

i used the app to drop off. easier than i expected. great overall experience thank you for helping my dreams come true!

I was in a pinch. And this location was able to help me 2 days. I will continue my business with them!

Everything was fine. I have no criticism of either the service or the vehicle.

COVID protection measures were not clearly explained. We assumed all precautions were taken to sanitize the truck and equipment. Just wasn't sure. All is well though.

The gentleman who assisted me was very accommodating.

It was my fault for not checking the gas before I left. I was told it was full so I didn't bother to even pay attention to it. I drove 30 Miles round-trip and ended up having to put in 17 gallons of gas. When I told the owner about it he told me that people steal Gas from the truck sometimes. Just make sure you check this before leaving this location so you don't incur extra costs like I did.

Easy drop off completed after hours

Customer service was efficient and friendly. Store was convenient and clean. Truck was clean and in good working order. Drop off, easy and efficient. Thank you.

Hello, I enjoyed my rental experience except I was charged for a missing dolly. I contacted a representative on the day of the rental and again 2 days ago and I haven't heard from anyone. Please contact me at jjulianagomez@yahoo.con

I had originally gone to this location to inquire and book the truck. I asked him if I could get the truck cheaper on line and he said no. Then after booking with him at the Hualapai location, I went back to Idaho and did some research. Turns out he had added .40 per mile and driving 1200 miles would be a big added expense. So I cancelled his reservation and rebooked cutting my expenses in half. He was an asshole for doing that. Simply wasn't right so I can't trust uhaul now. I will have to book several trucks in the near future and will look elsewhere first now before I book with your company because of that jerk.

Not sure if I would recommend, Had big challenges with the app and the website. Customer service however was amazing and while it took over 30 minutes to pick up the truck she was calm when I was losing my patience. Upon return I tried to use the app and it said my mileage was less than I started with. the store front was open and i went in and it said it still showed the truck was available for rent. It was not a bad experience but it seemed off.

Rumzi was a great help. I was in and out in no time. Great customer service. We had no problems with the van...great condition! Will be using them again and recommend my friends..thanks

I'm sure the location was fine. But they were closed when I dropped off

I will be renting my next truck sometime in August

Mr Rumzi Khoury Was very helpful, patient, personable and friendly. He provided genuine, excellent, customer service! My family highly recommends this location to anyone and everyone!

My service was truly a treat!

Ramsey did provide excellent service to me!!! Best Regards.

We had to wait for a long time

Nothing, everything was great. I would definitely recommend and/or return as a customer. It was the first for us to rent a truck and it was very easy.

The truck Brake sensor on the rental is way too sensitive. They cost me an hour in travel time because it kept on alerting me to fill up the tire

Customer service was great. On line check in made it so much simpler and faster.

Awesome dude I was

Extremely helpful. I'll use them again!

Awesome service!!! very clean friendly and helpful. Bent over backwards to help me out. I would drive an extra 10 miles just to rent from this business