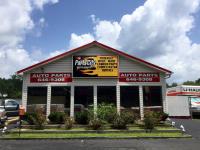 There are signs everywhere that say no U-Haul parking which is not particularly helpful when trying to drop off a truck after hours. I mean, where CAN I park this thing? I showed up a few minutes before the location opened, and the female manager at this location driving a pickup (that had "Parts City" on the side of it) said I had to move the truck. She did not say hello or good morning or offer any help of any kind--she just that I needed to move the truck. She did not say where I should move the truck--until I asked her where to move the truck. Not friendly. The online/app drop off was smooth and easy, however. I took a few pictures and answered a few questions to be out of there quickly before the Grinch manager came out again.

Had pick up time of 7am, which included a number of furniture pads. For whatever reason online contactless pickup wouldn't work, it told me had to pick up in person. Store opened at 7, but at 745, owner told me they didn't start U-Haul orders until 8. So at 8 I go back in and get checked out, but furniture pads weren't in truck. After about 20 minutes got them all together. The biggest problem with the delays was that I had moving help waiting for me at the house for over an hour. If the U-Haul side business is such a pain, don't do it.

It was closed, unable to rate

This truck was FILTHY! There was a noxious dust covering the cargo floor/walls, whatever it was made my guys sick. The damn ramp was broken and the customer service was sub-par in attempting to fix that issue. Terrible!

The folks were nice.

Turn in using the app was quick and accurate.

I was double charged for the rental. I was charged for pickup and i was charged again the same amount plus the addtionial mileage that I drove when I returned the equipment. I will be calling Parts City of Pegram or U-Haul today to get a refund for my money. You need to make the mobile pickup/return process easier and more convenient. It took a very long time just to pickup/return the eqiupment.

The owner wasn't normally open on Sunday but he happened to be there when I dropped the truck off. He checked me in and saved a trip back the next day.

Very lengthy process one size trucks to pick from lot was empty except for 3. 5x9 trucks

I was quoted one price and charged a different price even though I went the mileage predicted. Other than that over all good place to rent from. People are friendly as well.

The proprietor was present but claimed not to do Uhaul after 5. So I used mobile pick up which was fine except that the proprietor didn't use the indicated key lock box so I spent 15 looking for it and chatting with the Uhaul online representative before he came out to give me the key.

Man at store did not seem like he wanted to help or have anything to do with UHaul setup. I was having issues with downloading app even though i did self check in, and was telling him that, but he just stood there and stared at me for awhile before saying anything. Also did not provide correct dolly, first gave me a small one, I had paid for a furniture one, then when I told him he ended up giving an appliance one. Would not recommend here as he did not seem to want anything to do with the UHaul setup.

Tried to do remote check-in. Called ahead and was told I wouldn't need additional ID or have to go in. Arrived, checked in, and had to take a selfie, then a picture of my DL, then a picture of my passport (which I brought just in case). Was finally instructed to check the back of the truck for a "word lock." After examing the truck for about five minutes and determining there was no such lock, eventually went inside where they had the key. The whole point of doing the remote check-in was to save time and avoid having to go inside -- neither of which were accomplished. Also, the radio speakers had been set to full rear, when there were no rear speakers, so it took us about 10 minutes to figure out why the radio was on but we couldn't hear anything. On top of all of that, having to pay for gas, as well as milage charge feels like a rip-off. It should be one or the other.

About what you'd expect from a U-Hall dealership in a small Tennessee town.

Great people working at Parts City, and a convenient location for us in Kingston Springs. The U-Haul app wasn't working correctly for capturing my license info, but that was the only issue I had.

They are really nice and I will definitely recommend them to others.

Everything went smoothly for my rental of a 4x8 trailer, but I rented in person and not online.

There was a very large billing error that resulted in $90+ charged extra to my credit card. During the chaos of a move, it is very stressful to have to deal with calling to dispute charges and waiting days for an investigation and a refund. We've got a ton going on, and things like this could fall through the cracks for people in the midst of a move.

Was overcharged, will not be returning to this location.

I did pre checkin online to get in and out faster. Still took a lot longer then expected. Not very efficient on Uhaul rental process.

My mileage Allowed had been changed from 193 on "One-Way Rental (Out)" to 153 on "One-Way Rental (In)" contract. U-haul cust. service didn't know who changed it, but they corrected and refunded my overage. Overall, I like U-Haul and the equipment, not a fan of Pegram U-Haul.

He had no interest in renting unit, waited nearly a hour. Actually carried unit back early and rented another same size unit at uhaul hillwood. They were fast and very professional.

Jordan was helpful in assisting me in backing the trailer. His direction made it much easier to do.

The owners are incredibly friendly.

Was not given a drop off location choice which we had the week before. Individual did not to reserve truck when we came in day before.

The truck was clean but was not mechanically maintained. Very bad shimmy and smell of burning oil.

Have not received final bill

Waited for an hour in a half in store before we were helped.

This experience was as good as moving can be

On two occasions I have rented from this company (Pegram Location) and both times I returned the vehicle early and was told U-Haul would refund my money and that didn't happen either time. I'm told by others that this is not a good place to rent from, but it's the only one that is local. I've never had a problem with U-Haul in general, but with this particular agent it has happened not once, but twice.

The wait time to get the truck checked out was unreasonably long. I was given a smaller truck than I was promised, and I was overcharged for insurance. I would never use this location again.

The lady working there is very nice but it smells so strong of cigarette smoke.

I reserved an appliance dolly and they didn't have one. All they had was a utility dolly. No one called me to tell me and I needed an appliance dolly. The place that I picked up from knew I had requested an appliance dolly because he said to me â€œthey know I don't have an appliance dolly so I don't know why they offer it. This part is not against this actual location but the truck is a permanent truck, meaning I had to return it to them. This added 30 miles to my mileage. When I made the reservation online I was promoted as to which location I wanted to pick up from so I chose the nearest to me. I was never prompted or asked where I wanted to drop off so I assumed I could drop off at any U-Haul location. Also, check in when I went to pick up the truck took 40 minutes because the online checkin was busy, and when I called the U-Haul 800 number they said there was a long wait to check in

I think it was very professional. The store was convenient for me. Everybody was polite and thank me for using there truck. It made me feel like they really appreciate my business.

Just the mirror's on the back of the 26 footers.

This is my second time renting from here, the lady was awesome and her husband too. I would continue renting from them every time I move.

Quick in and out most likely because they didn't have auto parts customers. Was hesitant on using this location due to previous reviews of rudeness and wait time to get rental, however i did not experience this.

Only had one problem. It wasn't from dealer. I called a week earlier and gave Cliff info on vehicle I was using to tow trailer. It was ok but when I went to pickup trailer he re entered info the truck wouldn't validate. Cliff had to call you guys get everything straightened out. He got it done.

I can not think of anything that needs to be improved. They were very friendly and explained everything to me. Will use them again !

Price for one way rental was over triple the cost of delivering back to the same location. That seemed excessive to me.

Nice folks renting the trucks but did not clearly explain how round trip mileage was figured. Disappointed at return of truck because of 50 mile overage that I wasn't expecting.

Cost way too much