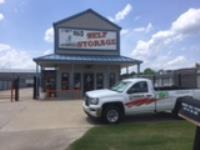 The caretaker was a wonderful lady and went out of her way to make my moving in and out at lot easier.

Make sure your customers get their receipt. After paying for the rental it then stated UHaul would be emailing me my copy, 24 hours later still NO receipt. Also rates are too high. Had rental truck for 4 hours and was charged over $72 .

The truck was caked with bugs and the windshield wipers were worn to the point of scraping the window.

The 20' Uhaul truck had a leak in the box. Had to drive 5+ miles away to get another truck. Very frustrating.

This one went pretty much textbook perfect.

I was treated very well by Rachel. She was very professional, courteous, and friendly. She made my experience a good one...

Nothing at all. The young lady who helped me was very knowledgable and friendly.

Clean and Easy access made it easy to utilize the unit. Very helpful agent

I would go back and listen to recordings. I believe i asked for a late pick up and if I had been told the latest was 5pm for that location we would have been there by 4:45, as it was I was scheduled for pickup of 6:45 for a location that closed at 5pm, then spoke to a 2nd rep to change pickup to 6pm still not informed location closed at 5pm, I couldn't access web initially probably my week internet signal but I called 800 again and this rep said location was closed at 5pm and I had actually called the pickup location about 10 minutes before 5pm to see if we could be early with no answer. 3rd rep made calls and informed me of the 24/7 arrangements, so I showed up at about 6:05pm read instrustion in a very poorly lit parking area in front of office and lock box, speaking with customer service while approval was being verified by 3rd party, asking for pictures of license front and back and 2 retakes, then remove sunglasses, I wear eyeglasses, then hat, then needed employment verification and rental or lease agreement, like I carry one in my pocket. We are self employed own our restaurant and my brother owns his house so no rental agreement. So personal references, gave our insurance agent of business office closed then gave # for my brothers tenant renting part of his property, when they did contact her all they asked was do you know Terry, ok thank you. By the way this took about 45 mins in light rain, chilly and I had to use the bathroom there isn't one of course, so I was doing the potty dance most of the call. Also when we went to get into truck the drivers door was over front lawn area that was a swamp of mud my brother went to get inside not seeing swamp due to lack of lighting and both feet were saturated with mud. Truck ran great, great mileage but having less than 8k miles on it when picked up the visors had major hand soil on them didn't bother us but was an observation especially knowing that some Wool light would have removed most or all of it. The return issues were on me as my phone was at 1% when I pulled into lot, unable to close out return process I called 800 to report return time, we did take pictures and of mileage and conditions of truck and gas level being closer to 1/2 tank, a little more than when we received truck We are ok with that of course but it didn't seem to be noted on return invoice. The final bill is ok, but the experience was extremely unpleasant and I will NEVER rent a truck from UHAUL through the 24/7 program again. What is most annoying is I KNOW THIS didn't need to be this way. I just left one of the largest storage facilities in Portland Oregon as an employee just last March, we also had UHAUL about 20 vehicles and trailers combined and we would have never put a customer through this mess, we had 4 lock boxes for after hours and night drop. I did also participate in the UHAUL University program so I know how you are instructed to operate. So you tell me how my experience was. UHAUL is the on

Thank you for awesome customer services, super easy with a quick process and honest answers.

Everything went very well with setting up the account for the unit. Access and security for the area was good. It was very well lit and clean on the inside of the fenced area.

I've rented from this location on more than one occasion and then customer service and overall experience has always been exemplary.

Very convenient for my use

The folks there are very friendly and professional. Thanks