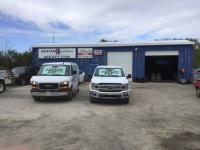 Very friendly and polite owner made it a hassle free van hire, definately will go there again. Ask on the phone first for availability of vehicle.

Staff was very helpful and knowledgeable.

No improvement is needed.

Very friendly and efficient personal at this location .

Do not confirm reservations online that can not be fulfilled by the location.

Nothing Jeff is great to deal with at this location

Customer service is great, and booking is quick. Jeff even preloaded the truck with a dolly and moving blankets at no extra cost. That's why I rented from here to move my stuff to a storage facility that rents Uhaul trucks.

The gentleman who I dealt with was just awesome. So helpful. I will rather drive again here, than to those closer crowded locations. Thanks again

The trailer was extremly old rusty and poorly designed.

Jeff is a great person to deal with!

I like dealing with Jeff. He is direct with instructions and very helpful. Thx Cat and Kevin

Jeff was awesome and easy to deal with

Very easy transaction. Owner was great to deal with.

Jeff did a excellent job of looking after me. Will use again..!!

I gave an average score for the following reason. I attempted to use the online/phone pick up and ran into nothing but trouble and unfortunately one particularly rude and obnoxious agent. I live in Canada and tried using the app; apparently your app does not work in Canada. Information that would have been useful to know! The website kept telling me the location service on my phone was off, which it was most certainly not. I called and spoke to one agent. To be blunt, he was awful and anything but helpful. After waiting over half an hour on hold, his "solution" was to close the webpage and restart my phone. I asked what that would do and what I should do if it didn't work; let's just say i was fairly confident restarting my phone would solve nothing. A very sarcastic "call back" was his response. I informed him that I had been sitting in the parking lot for quite some time, already waited half an hour to speak with him and did not want to wait again. So I asked for a direct number to someone. A very dismissive "we don't have that" was his response. He was of ZERO help. Of course, as predicted, restarting my phone did nothing. So again I had to call back, wait another 20 mins or so before I talked to another rep. I will admit, I was not the most pleasant person to deal with at that point. After an hour of sitting in a parking lot trying to pick up a van, I was just a little more than miffed. This agent however remained calm and helpful, walked me through the process, actually helped solve the issue and got me on my way. I did apologize 2 or 3 times for my curtness and expressed my appreciation for his awesome customer service. I do believe the problem could have been easily solved however, without any phone call. Your website kept saying my location service was not on; that was incorrect. In my settings, there was something set that was blocking your website from accessing information on my phone. THAT was the issue. It was the second agent I spoke with, the helpful one who walked me through the process of unblocking your webpage in less than a few clicks. What your company should consider is, rather than simply giving an error message that the location service is off, you could list those 3 or 4 steps to checking the settings on the customers phone and ensuring the uhaul webpage is unblocked. That would have saved me (and I would imagine others) a great deal of time and aggravation. Once I got the truck, everything else was a breeze and very convenient.

The person was friendly, and responded immediately to my rental needs. answered all the questions and provided simple instructions on what to do.

Jeff was very helpful, friendly, and accomodating. Overall experience was great and would return for future rentals.

Outside of a slow App / Automated process which I can't recommend. Thanks to Jeff for hoping in and helping by canceling the original and starting a new rental. Took less than 7 mins using the old fashion talk way.

I have used your services several times over the years and have always been thankful for the care you put in to providing the necessary equipment when needed. I've always had a positive experience with your location and would/do recommend your location to other folks.

Everything is good as is

Can't think of anything

I declined CDW but was forced to take it by onsite representative as I was advised CDW is mandatory due to COVID-19...makes no sense.

always great to deal with.

Tires were out of balance, but other than that everything worked perfect, reasonable prices and immediate response. I called 15 minutes before I needed the truck and trailer and got it upon arrival with no issues

Nothing! It was an easy and amazing experience. We'll definitely use them again if need be in the future

Jeff is awesome! He's easy to work with and always kind, providing an easy rental process.

Jeff was very eager to answer all my questions. He made the experience very easy and enjoyable! Would use again! And recommend!

Enjoyed this rental, it worked like clockwork. A good experience, thanks Jeff

Jeff was very accommodating and friendly .

Jeff was amazing to deal with especially during this global crisis. He returned calls promptly was accommodating with all requests and extremely knowledgeable about the use of any vehicles rented. Even mentioned how to be more efficient with gas mileage .Would highly recommend this location to use in future.

Unbelievable service, great location for all your hauling needs. Strongly recommend. Thank you for the great service.

I dropped off the vehicle on time, clean and within the prescribed mileage, but then I get charged again for dropping off this vehicle? Uhaul keeps breaking their contract is misleading on pricing and charging for made-up services.

The vehicle was out of Windshield washer fluid. Not safe in winter conditions.

Upon return the key was too big to fit through the slot in the key return box. Took us about 30mins with the call centre to figure out what to do with the key (was a public holiday)

The person I dealt with could not have been more helpful. I am in my 80's and appreciated his suggestions and patience.

Nothing at all. There was a mix up with my "one way" reservation and both the company and renter went over the top to accommodate us. Nothing but courtousy from U-Haul and it's representatives.

Don't charge me a cleaning fee for a clean truck

I am a repeat Uhaul rental customer at this location. It is an easy, professional and good customer service experience. And there is a good availability of vehicles.

Nothing can be improved the service was amazing!