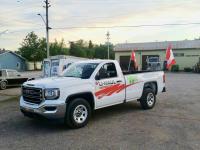 This was my first time renting and everything went perfect ! Very helpful also.

Stop sending a link to customers to do online check in to retrieve your truck. The link doesn't work and I had to call the main number and wait 20 minutes to get through for assistance. How about you tell us to go to the browser instead. Saving me a lot of time and anxiety and upset. Waisted almost an hour because of this technicality.

Mobile options are terrible for Canadians. Cant use the app. Unable to get website to work with chrom, forefox on android phone, and chrome and safari on an iPhone. Tried a third phone an android and it worked there. We all had 4 bars of service.

Mike went above and beyond to open on the Saturday morning for my scheduled pickup, when normally with Covid they would be closed. Caring, cooperative, polite and professional service. Thank you.

First of all I got charged 89 cents km. I was told it should be 69 cents km. They did not ask me about insurance, they told me, with out my permission. I would have put insurance but I should have been asked first. The truck was dirty and dusty. I have allergies and I got sick from the dust. There was a strong solvent smell in their off and that also made me sick. Not a Happy Customer. Will not recommend this location again. It was Mikes Auto Body & Sales. Very unhappy. Ida Kraft

It was a great experience

Very frustrating experience. Travelled 6 hours to get to Thunder Bay and spent 1.5 hours trying to get through on the app and while speaking with a representative a Uhaul, I was disconnected three times. Finally someone walked us through the process and we had success. A stressful time as we had a deadline to pickup furniture and our time was limited as it was. Would not rent another Uhaul unless the business was open to provide customer service. Would not recommend using the app to anyone.

Thank you for a Courteous, Clean, well organized rental experience.

van got the job done quickly|

I initially requested a 26foot truck. Was advised there was none available. The caller advised we could get 2 15 foot trucks and two separate locations. Picked up my first truck and could not access the app, only my partner could, but I made the initial reservation, which burned too much time, in which our second reservation called my partners friend, NOT me who, again, made the initial reservation. The second truck we attempted to pick up, but couldnt because, although I requested mobile pick up, it was not and we could not get the truck on that day. After being on hold several times and several hours, we finally were able to get a 26-foot truck...which I initially requested in the first place. It made for an incredibly stressful start to our day.

Jack and Lori are genuine â€˜customer service' oriented people. I left a Facebook message on Sunday and was on my way Monday morning delivering my moms piano to my granddaughter 750 Kim's! Truck and trailer very scenic ride in North-western Ontario. Thank you immensely.ðŸ’•

The Service was excellent, the folks were very polite, the paperwork was done and ready for signature, and away I went. It does not get any better than that.

I never saw anyone when i drop off the trailer.

They went above and beyond to make sure I had the truck and trailer I needed to complete my job. Many Thanks.

The customer service was amazing and received top service.

the rental office of jack on gore street was so obliging

Awesome.noticed trailer had been serviced and new tires.as a over the road long haul trucker I pay attention to detail good job uhaul thank you for a worry free move 10 stars

Extremely friendly, helpful, courteous and professional. I was especially pleased with the ease at which they dealt with a change in my contract. I was also quite please with the flexibility they displayed with my situation.

I used the 24/7 truckshare because i was told by a UHaul representative that I would be able to pick up the vehicle at any time the morning Of my pick up. No so! The order would only allow pick up 1 hour before the location opened at 9:00. So I got dropped off by taxi before 7:00 and waited in the cold for nothing. During the verification process, I was asked to provide either buisness name, passport, third party reference or the lease agreement. This was not mentioned in the instructional video. Asking for a photo of someone's passport seems inappropriate at any time and I didn't have it with me,anyway. The rental was all completed over the phone or online,so I didn't have the lease agreement. The U haul rep doing the verification didn't like the busness contact i gave him so that meant he woke up my wife and another aquaintance as references. The truck clearly had not been cleaned as there was loose change sitting on the dashboard and I submitted a photo of a sticky spill that was on the floor. This location should consider staying open later as they have short hours. I am unlikely to rent from U Haul again!

Thanks for great service.

Awesome customer service and great equipment. I would 100% recommend accessing their services.

For the online check in process, I was unaware that I needed to provide additional info such as a passport, lease, alternative contact etc. I felt unprepared while attempting to check in as I didn't have any extra documentation with me and had to scramble to find an alternate contact. A heads up would have been appreciated.

They are very good at what they do. Very helpful and friendly.I would highly recommend them to others.

Mike and his wife are exceptionally kind and very helpful

Great and friendly service every time.

Thanks for the good service!

very friendly people to deal with

great place to rent a u haul from. friendly and efficient

nothing to change Great people with wonderful service

Excellent people result in excellent experience. Thank you very much.

I was concerned as it was the first big snowfall of the year and I had arranged to pick up right at opening (9am). When I got there everything was plowed, truck was cleaned off and ready to go. Service was quick, friendly and professional.

Actually be open, not cost me 30$ for a cab only to have you be closed for two hours. Against what uhaul said

Canadianize the business language by going metric! e.g. Km vs. miles; CAN$ vs. US$; etc.

The owners of this establishment were so friendly and helpful, they made my wedding week that much easier :) Thank you

Was a great location and guy working there was nice. Would use him as a mechanic but not as a uhaul dealer.

I was charged more than my quote. I used less miles than was submitted and still charged the higher price. Had to drive extra miles due to could not pick up truck where I requested.

The vehicle was expensive on gas, difficult to get power up hills, had no air conditioning and overheated, All in all it was not a good experience and I would not deal with this company again. When got out of city noticed a U-Haul that had newer vehicles that had air conditioning and were diesel.

The two owners we amazing. The vehicle we were supposed to rent was stolen! They made several calls in attempt to get us what we needed. Eventually one was located, but it wouldn't be free until after their closing time. They let us know what was happening and met us after hours to ensure that we got the van we needed for our move. Very impressed!! Please ensure that they are aware of our sincere appreciation.

The personal attention received was wonderful. Mike's was very welcoming and kind when I initially approached to the time I returned the trailer. Very impressed and pleased with the personal touch they provided. Will certainly recommend this service provider to all my friends in need of a trailer to move.

These guys are absolutely great

This is the best Uhaul location in town!! Such a wonderful experience from the customer services to the cleanliness of the vehicle, I cannot say enough good things. Will definitely be recommending and using again.

Service when calling for road side assistance after a flat tire was some of the worst I have ever had. I actually had to not write this review for a day so I could cool off. The rep on the phone continuously got my name wrong, repeatedly asked the same questions and then had me conference call with GM so they could ask the same questions all over again and again misunderstand the answers get my name wrong etc. I have had to deal with roadside assistance before with other companies and this was by far the worst. The service dispatched was given the wrong directions the wrong colour of vehicular etc. What took a total of less than 1 hour when I had to call for roadside assistance from the time I placed the call until the time I was on the road again took nearly 4 hrs of a 24 hr rental. Honestly may be the last time I rent fro uhaul

Great people to deal with. No complaints.

Have used this location in the past. Will continue to use it in the future. If there is a problem, they will try to rectify it, great customer relations, family environment.

Nothing everything was easy and well done!!

Nothing. Quick and easy