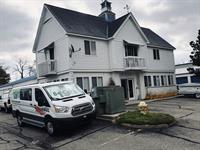 Eric, the owners son is very helpful and even accomodated me complaining about the trailer shaking too much and coming in after hours to switch. Only small complaint is that he could speed things up a little bit, but that's minor.

Lied about charges, extremely pushy and rude. We will not use uhaul again or recommend it and have already steered customers away for their safety.

This location was fine. However, when I pointed out the extra blankets I got from the Manassas, VA U-Haul location, the person at the Ann Arbor location could not find any record of this rental-- just the original truck and dolly and 12 blankets. Of course I returned everything, but I am hoping that the extra 24 blankets don't come back to haunt me in some way, and that they were accounted for when I returned the truck and everything else. I'll be renting a 15 foot truck on the 29th of September, same process and original locations, and I sure hope there is no change this time.

The online check in is the weak point. It took me 20 minutes at the Uhaul facility to check in. Fortunately, they were very helpful there

Ease of website - once you check in - give the code to the gate immediately - better and quicker directions, ease of chatting with agent, when you check out - automatically calculate mileage, I wasted over an hour of my time trying to get into the remote location and trying to return the truck. It was one of the most frustrating and unpleasant experiences ever.

Office had a "Masks must be worn at all times -- no exceptions" sign in the window. We agree. But when we got in, the worker was not wearing a mask. We asked him to and refused, saying things like a) it's a family business which makes it a legally gray area and b) really the masks are just there to protect *him* from *us*. Whether this is legal or not, he was a huge jerk about it.

Kyle was GREAT to work with. He was very accommodating wanting to make certain I was taken care of.

Excellent service. The gentleman who helped us check in was wonderful! Thank you!

I had an appointment to pick up a trailer between 4 and 4:15pm. When I made the appointment over the phone, the lady I made the appointment with made it very clear that I needed to pick up by 4:15 at the latest. I arrived at the gate at 4pm and called to see how to get in. Kyle said he was on his way and that I was early. 20 minutes later, Kyle shows up and lets me in the gate. First thing he says to me is â€œI can't rent you a trailer if you don't have the 4-point connectionâ€. My 4-runner does have the connection but he didn't even look before snapping this at me. I felt like he just didn't want to be there. We fill out paperwork and I back my truck up to the trailer. There was an older gentleman walking around, who came over to help Kyle hook up the trailer. I have a 1 7/8â€ ball and they said it had to be 2â€. I had left my 2â€ ball at home but I said I've towed multiple times with U-Haul with this hitch and nobody's ever said anything. They said the trailer wouldn't be secure without a 2â€ ball. I said â€œno problemâ€ and I asked if we could reschedule for tomorrow. They both looked hesitant and said they MIGHT be able to do that but didn't know if they could cancel today's. The older man said I should just go across the street and buy a 2â€ ball. I'm not going to go buy something I already have at my house and I'm also not going to drive 20 minutes home and back because I was just moving a few items across town. I could do it tomorrow. Kyle and the other man went inside to try to reschedule the reservation. A few minutes later, the old man came out and said â€œWell, I guess U-haul approved your ball.â€ Kyle called to say the same thing, saying he's never heard of using that size ball. Everyone has a 2â€ ball. The entire process took over an hour and at the end, Kyle took a picture of my license plate saying â€œthis is in case the trailer comes off and kills someone, they'll come after you and not meâ€. If the trailer wasn't safe, why would he let me take it? I was willing to come back the next day with the 2â€ ball. If U-Haul approved my hitch, why was he continuing to make snarky comments? It was terrible customer service. And the entire time, the other guy (I don't even know who he was or if he even worked there) was making me check my lights multiple times, making snippy comments about trailer safety and overall just treating me like I was stupid. When I returned the trailer that night, I almost couldn't get it off the hitch because Kyle had cranked it so tightly. It took 10 minutes to get it loose, I almost just decided to take my hitch off to leave it. This morning, Kyle called me to see if I returned the trailer, saying that he didn't think I had returned it but got to work and saw that I had. The entire experience was rude and inefficient. Whoever the other guy was was making everything very difficult and Kyle was obviously not very knowledgeable. There was no apology for misunderstanding, instead he just kept saying I was going

Pick up and drop off were quite easy, and we didn't experience any problems. I do wish the app would have notified me to enter my DL info the day before, so I didn't have to do it during the pickup process. I also think UHaul's truck descriptions are not accurate. It took us 3 trips to move a one-bedroom apartment with the 10' truck, which is supposedly meant for studios and one-bedrooms. This obviously upped our mileage costs, and we would have saved some $ if we had gotten the 20' truck instead.