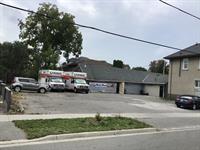 I got a call yesterday that my drop off location is changed to 244 wellington road, London which i dropped my drop my truck on 25 Feb around 10 PM. And today i got 5 calls from other location that why didn't you drop off truck yet you should have dropped by 9 AM on 26 feb as they have a customer waiting. As i was telling them that location of changed . They were asking me like i am a thief. It was just nightmare experience from starting to end. Very unprofessional

Such a dive convenience store , not very approachable. Girl at desk didn't even come outside and check the uhaul for mileage , gas , or do a walk around the truck before . Filled out all the information before hand , when we got there she had nothing . Wasted a half hour of our time having to drive from the location we initially had booked it at to this place which was across town. Didn't get an email notifying of the switch.

There was some miscommunication throughout my experience with this location. I have used the location on Clarke road and they've always been fantastic! I booked online, then the day before someone called me and started naming off other reservations that I had. I told this person that no, I wanted a totally different location and I have an email confirming it. It took several tries to explain this to him, he finally gave in and said I could keep my existing reservation. A few minutes later someone else calls me back and explains that the truck I originally booked was broken and that's why they needed to switch my location. This was totally fine with me and I gladly switched. When I arrived to pick up the truck, the employee asked how long I needed it for, I originally said 3pm, but asked if I could drop it off later, maybe between 5 and 6pm. He said that was fine and that they were there till 7pm. He also told me the truck was technically mine for the day because that's how they book them. Around 4:30-5pm this location calls me and wants to know when I'll be back with the truck because another family has booked it. I was sitting in St. Thomas with a truckload full by this point and it put me into a panic trying to unload everything as quick as possible. I got back a bit later than I had originally told the man, I apologised for being late and made a comment about how I hoped the other family wasn't waiting long. He told me the other family wasn't coming which annoyed the heck out of me because I just cut my move short to try and make it back in time. Dealing with this location added to the stress of moving, I have never experienced this at the other location. They have always been very relaxed with the rentals and don't call me multiple times to keep tabs on me. With this one I felt rushed, my move was incomplete and on top of it I am going to have to rent another truck to get the rest of my stuff. I will definetly never be using this location again when and if I rent another U-Haul.