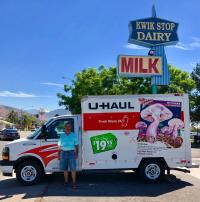 We were supposed to pick it up in corona had reservation for 1 month ahead were called the day before and told we had to drive 30 miles to San Bernardino to pick up the truck when we arrived there was no sign or office visible, we then found it was in the back of a dairy store in a storeroom. The computer wasn't working and initially we and the clerk received very little assistance from corporate, I called them myself and after sitting on hold for 30 min finally someone was able to assist the person getting on the computer. We got all the way to payment and it froze,he called for help again and was told by the customer service rep that she didn't know what to do,finally she said do you want me to ask someone else if they can help, he said yes please she then hung up about 10 min later a young man called and asked if he could help. He assisted the man getting on the computer and taking payment,he appeared to be an I T tech was very nice and helpful. The man at the store was very nice but not very knowledgeable. In total we were there about 21/2 hrs and when I asked the customer service person I spoke to if you were going to give us a discount for all of the inconvenience he said sorry can't do anything. This whole thing was just added to the fact that we had already had problems at the corona store. We had a question that we were told had to be answered by the manager,but unfortunately he would not answer his phone or return calls ,we also went in to the store multiple times and he was never there after 2 weeks I had called the distric managers number to finally get an answer. To say the least your customer service was very bad. Although when we returned the truck in bend oregon it was very different,very professional and timely. I think you need to look at training for your workers in the California stores and definitely you need to show more respect and concern for your customers. I realize that you probably won't do anything but file this in the trash but I felt I,at least needed to try to let you know what a awful experience we had

Should have another clerk to run the uhaul business aside from the mini mart. Also should check equipment before renting out

Yes the gentleman that help was very kind and helpful to my needs, no waiting, I was in and out in 15 min ,thank you for teamwork, uhaul rental .

Not a all friendly!

When returning the uhaul the person in the store was very rude and disrespectful. He told me he had nothing to do with uhaul and that I needed to find the drop box. However when I picked up the uhaul I was told by the owner to return the key to his attendant inside the store. Very unprofessional not to mention the store attendant was using foul language. I'd would reconsider this location.

The person managing the place asks if you want additional things even though everything is already filled out online. Reservation pickup is way passed the time I reserved (took 20 minutes). Poor customer service.

This was quick and easy, we were in and out for pickup and drop off.

The owner was very nice and accommodating. Unfortunately, the person whom scheduled it over the phone, made a mistake on the reservations, but the owner made sure I was able to still use the U-haul and rectified the issue. Thank you!

so great manager for customer service

Very informative on where to drop off. Worker unloaded tow dolly without delay and was very helpful.

As always, make certain to check the vehicle, mileage, fuel level, and functionality of the ramp, windows, doors, etc. Otherwise, it was a good experience for me.

Tony was excellent at this location.

This location currently does not have an employee to process a transaction for all normal business hours. The employee will be available for your exact scheduled time of pick up but not before if it's in the morning. The transaction was pleasant, courteous and rapid.

I was charged for 50 miles and only used 31. The cab was dirty and smelled and when I mentioned it, he stated it's ok. I waited almost an hour for my truck.

Not what I would expect from a U Haul location. Polar opposite of our Agoura Hills, CA location. The operator was nice enough but the place is lterally a hole in the wall and it took me a long time to get my truck while the clerk alternated selling beer, lottery tix etc.

Great customer services, quick transaction and were really polite and actually informed me more about the miles policy and the storage. This places is going to be my go to place from now on.

The whole process was so quick and easy. I would definitely recommend:)

the guy was so great helpful thank you Tony

I was not able to receive my U-Haul until and hour and a half after it was reserved for. They had me waiting in the heat until some guy drove back there to give me the keys when I had a self mobile pick originally in placed then he went ahead and help two people before me when I had already been waiting before them. I would not recommend this place to anyone looking for an easy quick pick up. They are so unorganized. It was totally not acceptable.

Everyone I spoke with was extremely helpful, THANK YOU TONY

Everyone I spoke with was extremely helpful, and I highly recommend U-Haul for anyone's next move!

Really sketchy, not a professional business. I felt very unsafe and glad to have a friend with me; would have been terrified as a woman alone. The "office" here is a dirty storage room in the back of a convenience store. The rental worked out fine, but I would never use this location again.

Manager needs to get to work on time. I was delayed because manager didn't show up until after 8:30 am for a location that advertised an 8:00 am opening.0

thank you Tony you did Excellant service

Charged me for an extra day when I returned the truck the same day I picked it up. I responded to the email and have not been contacted at all. Dissatisfied with how U-Haul has ignored my email.

I had made a reservation with another uhaul location off at Hallmark PKWY the day before. When I arrived the lady behind the counter gave me so much negative attitude and said just because you reserved a uhaul doesn't mean you will receive it. Never going there again. Thankfully, Kwik Stop Diary off of 40th had plenty 10' uhauls! Great customer service, empathetic to my horrible experience with Hallway PKWY, and friendly! You saved our already stressful day! Thank you, Kwik Stop Diary! Happy Holidays!

If you check my file you'll see I had to call U-Haul Customer Service twice when I dropped my 10 ft truck of at Kwik Stop Dairy. At first the manager, Tony, said I didn't need a receipt. I walked across the street and called your customer service. Your agent instructed me to return to Kwik Stop where I handed my phone to Tony as your agent instructed him to inspect the truck and give me a receipt. Only then did his assistant check the fuel level and mileage and reported to Tony. I asked Tony for a receipt and he said he would only email me. He was very angry that I asked for a receipt. Something was very suspicious about the whole ordeal. You may want to check their record and see if they were renting it out to others and pocketing the cash because they expected me to walk away without a receipt. Tony and his assistant kept looking at each other as if I had caught them at something. You should not allow this guy to represent U-Haul.

It wasn't a place I'd expect to rent U hauls but it was a fast and easy experience! My friend has rented one before somewhere else and they were really strict but this place is great! They get to the point and and work with you!

Took too long to get the trailer because you had to wait for same person to wait on store customers and then come back to you.

Truck was very dirty couldn't see through the glass ... customer service was horrible

This location was not my original drop off location, I was unable to make before they closed because of the late start on Saturday. The U-haul pick up location directed me to the wrong address for the drop off location because they had moved. I wasted over an hour and gas driving to the wrong location. Please listen to my audio tapes with the U-Haul customer service reps on 4/28.... nothing but wasted time.

Everything was good.keep it the same.

Every Thing Worked out Perfect

A charge of $46.63 has been processing from my bofa bank account since Wednesday 4/4/18.. it is now Saturday 4/7/18. It says amount may change waiting for final amount from merchant. I returned the van in perfect conditioned and closed out by paying a $50.47 cash to cashier Brian per his boss Tony. I was told there would be no charges to my card. Both were very kind & accommodating. Please confirm that there will be no charges to my card. Thank you

The return service was terrible will never use Uhaul again. It's upsetting and disgusting and rep offs as well. I almost fill up the gas tank and the man name Tony never gave me money back nor wanted to right it on the document and charged me for miles.

It was a very easy transaction; could not have asked for nicer people. Will definitely use again; highly recommend!

The service was great. I picked up the truck quickly and was on my way. Drop off was just as quick and easy.

The personnel seemed to not know what they're doing.

The owner of the location was very rude and disrespectful,made reservations for a truck that was in yard he wanted to give me something else.

I was asked for my automobile registration, which I did not have that was a bit inconvenient. This should have been made known to me in advance before I heads down the mountain and while I made my reservation.