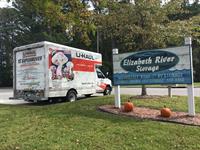 Too far off the beaten road

We were referred twice to two different locations before being sent to this location which was 30 minutes from where we originally rented from. The second referral was not brought to our attention until the actual time we were supposed to pick it up. We reserved for 9 am and after the first referral said 10 am. Then when we got to the third place the roads to get there closed with no direction. There was no other way to get there so we drove on closed roads. Then the location didn't know where the keys to the truck were and it took an hour to find them. So this put us to two hours behind on our trip.

I paid for a dolly but it was not in the truck.

The rep was not at the desk when we arrived.. We had to wait 20 mins and we were on a schedule.. He didn't know we were coming and couldn't answer any of our questions....

I was never informed that I needed to do everything online. Despite there being an actual person there in the office, they refused to help me due to the pandemic restrictions. I understand the need to social distance but when it comes to running effective customer service, there needs to be more done to meet the customer's needs.

Great location for pick up

The gentleman that checked me out in Chesapeake was awesome! Great conversation about the knowledge of the company and truck. Very personal. I would definitely recommend this location

This location was great to deal with , how ever this was the 3rd location I had to go to in order to get the trailer I had reserved 3 days ahead , 1st one just told me they didn't have it and couldn't help me , I called and uhaul sent me to another location and that location was closed finally 3hrs later got I got my tailer at ship yard location

This location is so out of the way. Cost me so much money to just get it to my house and back there.

It was ridiculous to have to wait 2 hours on roadside assistance, especially when we were close to a large city. Roadside assistance should respond much more quickly to the U-Haul customer.

When I request a pickup location a mile from my house, and you change it to a location on the other side of the city, 75 minutes after my requested pickup time, don't tell me about the change until the day before my pickup, and then when I get there, you dont have the furniture pads or dolly you charged me for, and you charge me extra mileage because you calculated my allowed miles based off of my original requested location, you really make me want to never use UHaul ever again. Why do I bother requesting anything if you literally just blew me off and said this is what you can have and you can pay extra for it.

Cedric was very professional. When I called the day before my pick up and was worried about the process as I was having trouble online with check-in. He was reassuring and calmed me right down. He was also VERY pleasant to deal with in person.

Cedric has always been very good and easy to work with. Due to location, this is my preferred location.

Absolutely nothing. The staff was very helpful, the facility well kept, and overall excellent. Would and will definitely recommend to any who asks!

This was not the location we had requested and was out of the way- complicating our move (we were offered a 30 mile trip, and had to spend too much of it just getting the truck to the house we were moving from)

Terrible everything, I should have gotten my money back it was that bad.

Although this location was excellent and the young man who waited on us provided excellent customer service, the online process of reserving the truck leaves much to be desired.

The representative was very knowledgeable and professional.

I had a wonderful experience with this location. I would highly recommend them. Shara was awesome, she went above and beyond to help. I'm well pleased.

Location was closed at time of drop off, but clear instructions were provided about drop off procedure in advance.

I dropped the truck off Sunday afternoon, and got a call for Kevin in the call center on Monday wanting to know where the truck was at, apparently the folks where I dropped it off never logged it in as received on Monday. So I had to worried the rest of the day, someone stole the truck.

The person who helped us was so nice and accommodating! The only negative thing was that we weren't told that the location would be closed when we dropped it off, or that there were instructions on the back of our receipt for after hours drop off. Next time make sure you tell your customers so they aren't surprised when they show up to return the truck and find out that you're closed.

I never asked to rent a dolly when I initially made an order by online. I found out the dolly was in the truck when I got my place. They charged $7.

Taillight had fallen out of socket .It look like someone had tired to repair it and pop rivet in place. I showed the dealer in lawrenceville he said he would repair it

Maybe open different hours. Most of the population works 8/9am to 5 and you close at 5. It just makes it hard for lots of potential workers to get there before the office closes.

The entire experience was excellent. Thank you.

It was a very pleasant working with you guys

Great customer service, will use again and recommend to friends.

I filled the gas actually past where it was when I picked up the truck but was charged $63 for fuel. I don't understand why.

the gentleman was very helpful! nice guy (excellent). however, the location is a bit out of the way. thanks!

Truck was ready when promised. Easy pickup and return.

Improve the ability to pick-up truck ordered at the preferred location. The substitute location opened an hour later and was further away.

Location was way out of the way for my area. I was given extra miles for free due to the fact I had to drive 20 miles out of my way to get the truck, which was nice, but there's no reason the three other U-haul locations near me didn't have a 10 foot truck in stock.

Very friendly staff. They stayed a little late for me. Very much appreciated. Truck performed perfectly.

Very great customer service. The gentleman that helped me was extremely nice. Would definitely rent from them again.

Customer service was outstanding. Thank you

very quick and efficient process to drop off truck and tow dolly. Left the mount from my GPS in the truck and the attendant was helpful to remove it and contact me to get it. Very helpful people

Front desk person was not Very professional Or pleasant

There isn't anything that I would change.. the service was outstanding!

What I am upset about is that I was charged for 2 day rental when I had the tow dolly on for a period of less than 24 hours. Even though the place was closed on Sunday the cameras on site can prove that I returned the dolly well before 4:00 pm (actually it was around 12:00 pm) I think this should be corrected.

little better signage on the building

I am writing in hopes that U Haul can learn and do better. Though I am rating our experience with the above location high because it was a wonderful place, I have not had good luck in other situations. My first comment is that when we knew we were going to move, I immediately called U Haul to schedule a possible date for moving. The young lady was misinformed and told us wrong information. We ended up going through a huge heart ache because of it. The second contact with U Haul happened when I drove a truck for a friend who didn't drive. She was renting but I was driving. Within a block of leaving the rental location, I noticed that the gas gage was about an 8th of an inch from the full mark. I called my friend to have her call in the discrepancy. She did call in at least twice. Upon finishing our business at this particular U Haul, we brought up the issue of the gas and the young man insisted that since we signed the contract (before seeing the gas gage) we would be held to the contract. We left very dissatisfied. Letting the renter, who filled the tank 1/8 of an inch over the full mark, have a few dollars back would have been no sweat for the company and made happy customers. The third situation happened, unfortunately with the same U Haul outlet as the above situation because it was convenient. When I called U Haul 800 to see if we could have a free storage unit before our move due to very unhappy circumstances, the 800 number person said yes. When I went to the above shop, they were unwilling to do that, he had not heard of it and gave us grief. After some negotiations the man agreed. Our final mishap, happed 100 yards after the final truck/trailer pick up at the Chesapeake pick-up site. We tried to avoid a pot hole but didn't and got a flat tire. We were delayed 3 hours and the driver of the repair vehicle said directions were poor. Our suggestions: 1. Please train your personel better on matter of truck use. We were initially told a price which demanded that we return the truck to the town we were moving from. That DID NOT make sense. Why should we rent a truck to move to another state and then have to bring it back to the state we were leaving? Train your people better. 2. Ask customers who call in, which U Haul location they are using so that U Haul headquarters can call that branch to confirm changes in protocol or favors to help customers. I can understand why there was dismay on the part of the franchaise person. He had not heard of free storage before the move, only after. When I told him headquarters granted that to me, he hesitantly agreed. Headquarters needs to communicate with their franchaise owners. I got that in another situation too, the owner complained that the booking agents don't communicate or take inventory of what various U Haul dealerships have available. On the positive side, we have used U Haul for about 90% of our moving needs, you are dependable and when we called ab

The reason I wouldn't is only because of the location. I am grateful they had a truck available for me to use considering the short notice given. Thank you!

Met me as I parked, checked me in very efficiently, professional, polite. I will use this location again!

We have used this site before. The young man who manages it is rock solid. He knew us by name when I dropped off the truck, and it was very easy.

have used this location before and familiar with the attendant, very pleasant and helpful as before. location is convenient to my home, will use again.

Great place to rent in local area. Don was very friendly and a great guy to deal with. I would go back and recommend to my family and friends.