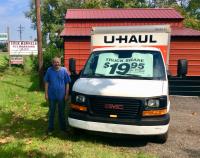 The customer service I received was exceptional.

Set it up online and confirm reservation first and verify everything.

The trailer I had could use some lubricant on the sliding door, it is getting quite stiff.

dropped truck off after hours so no real interaction, I appreciated the ability to drop off the truck after we were finished so it wouldn't have to be on our street

Nothing. Experience was great and easy. I would refer friends and family as well as use again. Thank you for all your help

This location is the best. I have rented from here before and others. Never an issue. The others switched my location for pick up at the last minute, issues with trucks breaking down and attempting to charge me.

Everyone I have called the Hamilton U-Haul and Milford U-Haul have gone over the top with customer service. Everyone took the time I needed to walk me Carefully through every question I had! I appreciate everyone that helped me. I wish I had everyone's name so I could thank them.

The owner was great! Very attentive to my needs and very knowledgeable of his equipment. Very friendly as well. I will definitely go back!

The windshield wipers on the truck I borrowed are in bad shape. Need to be replaced.

The area is a little rough looking but the proprietor was very nice.

The gentleman who assisted me was very and helpful and courteous. I would definitely recommend him and his location. I would only recommend better lighting around the night drop box.

Easy pick up, he explained all the rental rules and such very well. Quick & easy return. Great service, thank you Bill!!

Truck was well worn, but fully functional. It did smell of strong cigarette smoke.

The equipment was great ! The service was great ! The location was without a doubt the worst I have ever seen for a U haul location. I can not believe. that any U haul Representative visited this location and certified it to represent U haul. I have been to nicer junk yards.

I rented a truck to pick up a bedroom set for my daughter. When we got to the warehouse for pick up, it was closed. So we returned the truck. We had it a total of 30 min. Instead of offering a credit on the daily rate or a refund, I was charged the full $50! I can understand charging the mileage and I filled the tank to full again-$7 worth of gas. But we only had the truck 30min. Wont rent from this location again!! And may not recommend uhaul in general because of it

My experience was extremely unprofessional and disgusting.I paid for a 17' truck and the back of the truck wouldn't open. Luckily I was early because if not I would have been without a truck considering the place was to close at 6 o'clock, the time of my reservation. I arrived a little after 5 o'clock and realized the door wouldn't open and the man working literally told me to try harder. The place smelled of hard drugs and dogs were there scaring my friend and I. This location is gross and filthy and I will NEVER use uhaul again because of it. Ended up having to get a smaller truck and received no discount because of it.. the man working didn't help me retrieve my equipment I ordered because he told me to find it myself. Please cal for more details

New vehicles! The one I drove was extremely old and smelled like cigarettes The vehicle drove overall good but has a lot of play in the steering and the steering wheel when driving straight is not centered.

Mr. Eder was friendly and knowledgeable of my questions. I'll definitely rent from and reccomend this location !!!

I Am very satisfied with the price and customer service. Very friendly and made the process simple

The man at this location was extremely nice and very helpful. Moving is never fun, but he removed some of the stress.

They were very friendly and helpful. Very professional

Very helpful and the whole process went very smoothly. They even checked in my truck for me when I didn't have my mobile device with me after dropping off the truck. Will definitely use them again.

Rather underdeveloped and small site and hard to see. Needs to be paved and more established as an office.

This time tried the new mobile check in, scheduled with my 21 year old daughter listed as a driver. It was well past business hours when she arrived to pick up. When the app wouldn't work an older man who lives at the location, was at a loss on how to fix it. So he decided to cancel our reservation and redo it in my daughter's name. Fast forward the following evening when I called into the customer service line in order to extend our reservation- learning my reservation (24 hrs) was canceled & the new reservation only had 12 hours! After time with U-Haul working out the errors the apologetic agent fixed & extended our reservation for a nominal fee of something around $48. My husband and I showed up at the location shortly there after to pick up our car. Just after my husband left the lot I was bombarded by a very angry man who stated I was not leaving the lot with the truck and then began to threaten the police,reporting the truck stolen and holding my 21 year old child responsible. Even shouting that he was going to put her on the "do not rent list" for good. He was overbearing, threatening and unprofessional. I explained that the truck was still loaded with our belongings and attempted to discuss the misunderstanding. Reporting several times that I had paid for an extension, but he did not even acknowledge my words. He stated he had to pay another customer $50 for the truck not being there. He demanded for me to answer who was going to pay him back? I observed him fumble with his tablet, but he couldn't see the extension. I attempted to understand where things went awry, learning he was the one who had canceled my reservation etc. He was so angry that I began to become frightened & couldn't imagine how my daughter would have managed the circumstance had she been the one to arrive that evening. I called Uhaul, confirming the extension as well as the fact that I had until the following morning to return the truck. My attempt to be diplomatic abruptly ended when he went as far as to make suggestive comments, I told him he had gone too far he stated to me that he had not even begun to go far enough, maybe with "the younger package" meaning my daughter. I was LIVID AND ASTONISHED and as he advised me if the truck was not returned that evening he would in fact be reporting it stolen I left telling him to do what he needed to do (regarding calling the police). Because I was not at all willing to risk my child being in any sort of legal trouble or gaining negative points against her financial reputation (before it even really exists) I felt I had no choice but to hire help to insure the truck would be empty & returned that evening. There were very little options with such short notice so we found ourselves paying another $150 to U-Haul which provided 2 men for 2 hours. With that help the truck was returned that same evening before midnight and well before it was due the following morning. Uhaul corporate, while responsive in regards to

Rented a car hauler. The ratchet strap ratchets were so bound up they were hard to get undone. They need some lube. Told the attendant that at the end of the rental and he said ok. Next time I'll check them out before I leave the rental place.

Front tires were worn to an excess on one edge (alignment problem?) and had to be replaced before I could begin loading for my trip. This cost me 12 hours as to when I arrived with my load. .

While not your typical U-Haul location, the location was perfect for, and the service was great.

Nothing needed to improve. Everyone was friendly and we had no issues at all with our rental!

Check your fuel level before leaving. I noticed it was incorrect after leaving the lot. Called UHaul and they fixed it but would've been much easier in the lot before leaving. I've rented many times from this location and this is the first time that happened.

I have rented from this location before and they are very friendly and helpful. I will continue to use this location and I would highly recommend them to family and friends.

They do not run a very professional uhaul service at this location. Rented a uhaul on Thursday the 27th at 5pm for 24 hours, this was for an in town move(Fairfield to colerain) with me estimating 50 miles, that was giving me a few extra as I had already mapped out the route and mileage. The man who checked over the truck before I left said I was all good. When i returned the uhaul he charged me 105 MILES! Basically, I believe he messed up on the previous renter and is trying to charge me their miles as well. Uhaul isn't going anything to take care of the situation. Do NOT rent from this location.

No fault of the location, the right turn signal on the trailer wasn't working. Brake lights worked fine. Overall a good experience and cost efficient.