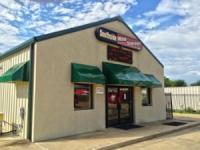 The truck I rented had very little gas in it. It did not have enough for me to be able to do the moving I needed to do. Which means I had to buy more gas than I needed because I had no way to estimate how much I would use. I resent this. Vehicles should be provided with a full tank of gas. I will rent from another company next time.

1) I ordered furniture pads, and I was told that he didn't have any; he said that he had some in the 'other' truck, but could not give them to me; he said that I could go to Walmart and purchase some; 2) There was less than 1/8 tank of gas in the truck to start; they did give a $19.50 gas credit, because I was expected (in the contract) to bring the truck back with 1/4 tank gas; 3) The truck had not been cleaned at all; there was all kinds of trash and loose dog food scattered throughout the interior of the truck bed; while I checked the exterior of the truck for damage before departing the pickup location, it did not occur to me to check the interior bed first; 4) So, for a 45 mile trip to move 1/2 truck of furniture, I had to stop for gas twice (beginning and end); I had to clean out the truck twice (beginning and end); and, I had to make another stop to purchase furniture pads; worst experience with UHaul ever

I would say the truck needs an appliance dolly

Renting the vehicle was a relatively easy process. Blake was very helpful and knowledgeable. The only thing that I wasn't aware of was that I had to return the U-Haul to the same location where I picked it up. I had planned on returning it to a closer location. Overall, it was a good experience.

I HATED the online experience!!!!!!!! I just wanted to call and reserve a truck, use it and bring it back. It took me more time to fiddle with the online crap than it did for me to move my things!

I had a really hard time getting the lock undone.

Your website was not clear that my rental was checked in

We were over charged days, and now we're having to go through hoops to get our money back.

Be available during store hours or allow mobile pick ups.

The lady that rented it to me was supposed to set up a one way drip off and she didn't apparently.i went to drip off at a different location and they said I could not because the lady set it up for me to return to this location. Cost me extra mileage for no reason highly unsatisfied and I do not believe I should have to had to pay extra money for that mileage when this location messed up and I've called to clearify this mistake over 5 times now and left messages and no one will answer or return my calls.

Pick up/drive away time was 20 minutes late and I had checked in online ahead of time. No apology. No greeting no hi how are you? No have a good day. If you're having only one interaction with a new customer you should try to make it a good one.

The service was courteous, prompt and a very pleasant experience.

You need to have the U Haul at the place that is indicated when you go online in the first place, that was irritating. I rented in Glenpool, starting at nine, got Sapulpa starting at 12. It worked out luckily.

Even though, I completed all the reservation info online, I still had to wait about 10 minutes before the agent would assist me. After the wait, I had to give him all my information again, CC info, personal info, destination, expected milage etc... again. Seems redundant, if all the info was previously entered online. The cargo van looks as if it had never been cleaned. Old soggy cigarettes rolling on the ground, almost enough sand & dirt to fill a small kid's sandbox, a sticky substance splattered all over the interior door panels, & the steering wheel was grimy enough to leave black soot on my hands after a 90 mile drive. If I wasn't in a hurry to use the van same day, & the fact that I knew I wouldn't get speedy service from the agent, I would've returned the van promptly and requested a replacement. Needles to say, even though the van didn't meet Uhaul standards, I know it's the 3rd party agent who should take responsibility for the state of the van.

they were closed before the scheduled time. and i was worried about leaving the truck there.

The building was in very poor condition.

Customer service representative issued a local keychain (shape: stop sign) for a trip from North Carolina to Alabama. Towing equipment (chains, straps) needed to be cleaned and/or oiled. Overall experience was satisfactory and representative was helpful.

Check and fill fluids - wiper blades. Have additions and trailer loaded and parked for customer pickup.

The physical location in Charlotte was perfect for our needs. Near IKEA. The service was casual in the extreme. I came away with no receipt or contract. But they did have the reserved clean truck and they were easy to work with.

Do not allow this location to represent UHaul any longer!!! Not only was the place run down, but the woman behind the desk was incredibly unprofessional, rude but she was also a theif! When we drove up, she acted as though I was interrupting her manicure (painting her nails). She then told me that she was about to close so I was lucky her nails hadn't dried yet. She got my key and then went out to the truck. When she came back, she spent a good 10 mins on her computer, slamming things around and cussing because her computer was moving so slow. She finally looks up and says "You need to pay $63.59 for over milage or else you can't check in the truck." At this point, the truck was due back in 15 mins, so there was no way I could try to take it anywhere else. When I asked what the charge was for, she smiled and said, "Overage". She could not explain to me what the overage was for. Her printer was jammed she said, so she could not show me on my paper work what the amount was for. AND when I tried to pay with a credit card, she said that her machine was down and she could only take cash. After reminding me that I didn't have much time before she would have to charge me for another day because the truck would be late checking in, I decided to give her the money to prevent any further issue. I handed her 4 $20 bills. She said she didn't have change. I explained that I didn't have any change either, so she said she would just put in the $3.59 for me and gave me back on of my $20 bills. I asked for a receipt and she said "I told you my printer is jammed, so you can't get no reciept." I told her I needed one for my records, so she took my email address and said she would email it to me. I clarified that the $60 was for random overage and that she would email me a receipt of the transaction and she said yes. AWFUL! When I got home and checked my contract, we had gotten no where near the milage that we were allowed. 359 miles, but we had 415 miles available. In addition, the contract shows that we turned in the truck with the same amount of gas and in perfect condition, so I am confused about what "overage" I could have been charged for. And much to my surprise, when I checked my email an hour later, there was a receipt alright. It showed that the truck was turned in and WAS NOT over the milage. Had the same amount of gas in it and that there were no extra fees paid. It showed all $0.00 down the line for anything extra that I should have been billed. I feel embarassed and cheated that this woman took this money from me and I feel as though we deserve not only an apology for the type of service that was provided, along with a full refund of the obviously fraudulent payment I was forced to pay, but also some compensation for the broken down truck. I simply do not understand how you could have someone like this woman represent your company. The location literally looked like it was vacant. The only reason I turned in there is bec

please have updated phone number on the website..because of this, i could not call the location, instead had to drive up there for questions...

poor customer service. was billed for services that I opted out and was told that I would receive price match but did not receive. Attempted several times top resolve issue with management but was unsucessful. Had to dispute transaction with credit card company. Highly disappointed with service

1. Wash off the bird droppings before delivery 2. Do not make the customer kneel in the mud to connect the trailer.

Paid with a cash deposit...when I returned the vehicle, the employee I paid was not at the store and the person working had no idea the vehicle was coming back, and did not have my change from the deposit. Still awaiting a call back to arrange a way to pick up my money.

The appearance of the location was disgusting and unsafe for customers. The ramp leading to the entrance was broken. The inside of the building was dirty, smelled, and full of trash.

My reason for rating it poor. I had an reservation for 9am. The employee did not show up til 10am. The manager arrived on scene. He did not check the gas on the truck. He just stated return it back to where it was. Once we did, we only drove 7 miles. Used maybe 3 to 4 in gas. But we were told the gas was more and it wasn't. the manager and his wife were excellent. Mrs. Tinsley