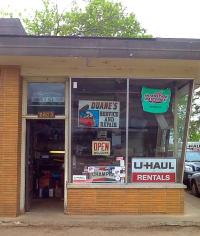 Always a great location to work with! Have used Duane's for years.

The place was crammed with cars and I seriously doubted we would be able to get by them with the trailer hitched up. Scary! With that said the location was convenient.

The initial call center reservation representative was rude and not helpful. This pickup location was dirty, truck was not checked over and I was given the wrong vehicle, unknown to me at the time because they were not able to bring up the info on the computer. I ended up taking it to my local U haul store after pick to verify, have it checked over and cleaned. The wrong truck issue was sorted out at the drop off but took an additional 30 minutes. Overall I got the truck I needed but the customer service was poor, with the exception being my local U haul store. They were helpful, wish I could have just picked up the truck there.

Dave was great. Everything went as planned.

he is not concern with u-haul business

Dave at Duanes 66 Service was very helpful and got me hooked up with little delay.

His location wasn't the issue. I was sent to three places before I was able to get the equipment. The initial contact at Eagan was HORRIBLE!! After that U-haul had no idea where the piece of equipment was FRUSTRATING and time consuming. Had to drive an EXTRA hour.

From my experience, this location will likely not have room to return the truck at the business itself. Customers may need to park on the street, potentially a block or two away, depending on the day and/or time of the year. I recommend planning an additional 15-20 minutes while returning the truck in order to avoid extra fees from U-Haul.

The online app and pickup was horrible. I got kicked out over 10 times downloading info and will never use the â€œfasterâ€ online portal again. Then was on hold on phone with Uhaul for over 15 minutes trying to solve problem. Location was good, but your technology was a complete failure. Awful experience only saved by solid on site support.

Always a good experience at this location.

Van was dirty and gas not filled up. But people were friendly and easy to work with. I'd rent from there again.

This location gave me an extra 20 miles because I had to go to Mound to pick up instead of the Delano location where I ordered. When we picked up truck it was only half full of gas.

Dave is awesome and very helpful and accommodating. He does a great job!

Went out of their way to be very helpful, very much appreciated!

I am VERY disappointed in the final cost. I did not use the shop attendant for my checkout, just the app. The mobile app does NOT make it obvious that the $20 rental was for limited hours. When I submitted a complaint to UHaul.com all I got back a screen shot and nothing else.

Friendly Staff. Easy to work with.

My experience was great through and through. I will highly recommend this location!

No told 8 mpg sucks. Cost of fuel was a big issue as it took 8 Tanks

I thought my contact person was great. I didn't know what to expect when I walked in, but when I saw the condition of the vehicle I was impressed. The process was smooth and I would definitely rent a Uhaul from this location again. :)

The first trailer I got had expired tags and the wheel bearing On one wheel was junk. Luckily they exchanged my trailer for a different one that got me across the country. 1400 miles. Thanks uhaul.

I AM VERY HAPPY HOW THIS TRANSACTION AND THE EQUIPMENT PERFORMED. EVERYTHING MET MY EXPECTATIONS. DAVE AND DAVE ARE EXCELLENT TO WORK WITH AT THIS LOCATION.

Only place near by so no other place to recommend.

Total confusion on making/confirming reservation and location for pick up. Started with making An on line reservation for pick up at Plymouth, Minnesota. Followed by multiple (5) separate phone calls or texts from UHAUL central reservation, Savage, and Mound, Minnesota about where to pick up trailer. Total confusion. Finally notified to pick up at Duanes Auto in Mound, Minnesota. When arrived Mound location, was told could not provide because trailer was only available for local. Took 15-20 phone call between local and UHAUL district manager for final ok. Pick up location in Mound was a dump. Old gas station converted to repair shop. Cars, tools, dirt, flat rate manuals from 60's laying over the place. Rest room worse than porta pots. Saving grace was Duane's overall positive approach to resolving all of the confusion over reservation. Which in total took about 45 minutes between arrival and departure with trailer. Drop off at UHAUL on South Broadway in Rochester was terrific. Staff, facilities, access and experience all â€œ5 starâ€. Would recommend better coordination / communication between UHAUL â€œcentralâ€ reservation system and local sites.

Too small, equipment not ready, had to move several cars just to get at the trailer leaving only one car width to try and hook trailer up.

Easy and simple to pick up and drop off. parking was a little difficult.

Friendly and easy. Can't ask for much more.

Awesome service. Always at this location.

If I was in charge of who U Haul had a business relationship with I would discontinue Shaggys immediately. They are a horrible representative of U-Haul as a company!

It was a small, old and sort of dirty garage but the people were very friendly. Great experience picking up.

We returned the truck after hours and deposited the key in the appropriate box - couldn't have been easier!

It's just a very small space to navigate for drivers with large vehicles like our 15 passenger vans, but we made it work!

Great customer service at this location!

The people here were friendly and helpful.

David was very courteous in all aspects of the rental process. I was there just as he opened. He handled several calls with a thoughtful response, move equipment to get my rental ready and was a pleasure to work with. I was out in a very short time.

Operator was Very helpful and fast !!

Yes, I had an unexpected family problem come up, and turned the trailer in 4 days early, and 900 miles less, and I got NO money back! That is absolutely wrong, and as a single mom, every single dollar counts, and I don't think that's right, adter all, it just means you can rent to someone else faster! I will try NOT to use Uhaul ever again because of it.

I haul was very busy with college moving but I drove 42 miles out of my way to go get the 26' truck I needed. Would have been very nice to get some money back since I rented for 2 days but returned after 1 day.

I did the check in the night before and he had to ask me a lot of the same questions. Overall this location was unorganized and wouldn't be my first choice to go back to.