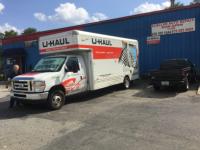 1st. The location was changed 2 days before pickup. 2. I ordered 24/7 pickup at 8 am and I could not get access to the truck until they opened at 9. 3. I did online check in and still had to fill out a bunch of paperwork on site

There was no place to leave the key so I put it in the mail box.

My entire experience was very poor with U-Haul not with this location specifically. I had originally rented a 10-foot truck at one location. The day before pickup I was told to go to a different location. I went to that second location and the office was not closed no one answered the phone. I called U-Haul and they also were not able to get ahold of the owner manager of that location. So I had to go to a different location and pick up a 15 foot truck when I wanted a 10-foot truck. So I had to take the 15 even though it been used more gas and was harder to drive on the freeways for me. so overall The experience sucked and I doubt if I'll be using you again. And when I did pick up the 15 foot truck at this location, the guy either didn't speak very much English or he just wasn't very communicative as I kind of wandered around following him and didn't know what I was supposed to be doing and he didn't communicate any information.

Not charge $40 for being 30 minutes late. We might as well kept the truck for the entire day. Also, no one was available at this location.

There was less than a quarter tank of gas at pickup

The location was an auto repair shop and, initially, we thought that we were at the wrong place. If not for seeing a lone U-Haul truck parked behind a gate amongst cars needing repairs, we would have left. Gabriel was very nice and, to our surprise, the truck was pristine with only 26k miles on it. We drove 512 miles with absolutely no problems.

The site contact wasn't sure about the ball hitch size required for the 6 x 12 trailer. Otherwise, he was a lot of help. On a different note, I wasn't aware that I needed an electrical adapter for the trailer lights. Luckily, I was able to go and purchase one close by.

Very hard to understand when location does not speak much English

I turned my u-haul in 3 days after I rented it ,I called this location to let them know I would drop off sooner than anticipated and I was told to park the uhaul and they would check it in the next morning this was on 10/18/2018 , Today on 10/17/2018 I get a receipt and a charge for an extra 200 dollars for a uhaul that I supposedly kept for an extra 7 days . This is absolutely ridiculous that due to the inability of the people working at this location I have to be penalized for the situation.

I was not ask if I want the safemove insurance and was charged for it. Also the vehicle was not clean. The other thing is that He want me to bring the van with more Gas by fake ready it, which I stopped him for the correct reading. Furthermore, they intentionally left the truck with not full with Gas so that the customers can mistakenly fill the truck, since the gas is not refundable. People need watch out for booby traps at this uhul location and others. Thanks

For people to know there JOB! I dealt with so many people with in the past 4 weeks regarding this rental, to make sure everything would be ready for my move kept getting things confirmed up until the day before everything was just a big problem. TERRIBLE!

He charged me 0.47 cents , why I asked him for what ? No explanation. After He told me forget about it. Unfortunately I saw the charge in my credit card. I left my storage by 10 days before the next payment due. I paid for the month of August in advance, I only got back $147 of $174 and this ignorant charged me .47 cents. I won't do business with u haul anymore

The vendors seemed like nice people, but they did not speak much English. Their English speaking employee did not know how to handle the U-haul order. There was no sign outside and I couldn't find the location on Google maps. I was also sent a partial address from U-haul traffic which resulted in my having to drive 30 miles out of the way.

They were not open on time. About 15 minutes late to even open and did not act like I was a priority. Also had to jump start a car before getting the Uhaul out.

When i went to pickup my rental i asked the person helping me to make sure several times that this would be a one way rental. And to find out the next day it wasnt was really upsetting

I don't normally involve myself in these types of customer service surveys, however, my experience was so poor that I needed to let my voice be heard. Several weeks in advance I reserved a 20' truck for my move from Atlanta, GA to Knoxville, TN. I have had some interaction with the U-haul location (South Cobb Pkwy), and it was pleasant, so I decided to use this location again. Included in my reservation was a dolly, furniture dolly, and 2 dozen furniture pads. I was set to pick up the truck first thing in the morning at 7:00 am. My wife is 8 months pregnant, and we have already been living in Knoxville at a friends house do to the start of my job for a few days. Thus our plan was to drive down Friday night, pick up the truck first thing in the morning and start loading everything to then return Saturday Night. My Brother-in-law had graciously agreed to come with us to Atlanta to help with the move, however, he had a prior engagement on Saturday night that we would need to get him back for. Given that we would be able to start moving around 7:30 am neither of us thought this would be an issue. The day before the reservation I received a confirmation that I was now supposed to pick up my truck at a separate location (Cuellar Auto Repair) and could not pick up until 9:00 am. Obviously I was a little disappointed by this. I was now having to go to an unfamiliar location and my pickup had been delayed by 2 hours. This put some added pressure to get everything moved in time for my return to Knoxville that night. I decided that I would try to get to the location a little early in the hopes of making up some of the lost time. I arrived at 8:30. This location is not at all what I was expecting. It is a run down warehouse/auto repair shop. No one was present when I arrived. In fact no one arrived until 9:15. I was taken back into an incredibly messy office and was interacting with someone who spoke English very poorly. (Side note, pasted all along the walls were scantily clad women that I would hardly consider appropriate and what U-haul expects to greet there customers with.) As he started working on my order I could tell he was a little flustered. I thought he was going to start confirming all of the information of my order, but what it actually looked like he was doing was starting my order from scratch. He re entered everything that I had already done via the U-Haul's online website and confirmation. I verbally confirmed my original order with him (20' truck, 2 dollies, 2 dozen furniture pads) He responded in Spanish. It took about 15-20 minutes, which in my past experience is significantly longer than what a pickup has taken. He printed off some papers and asked me to follow him outside to the truck. He grabbed the two dollies and threw them in the back. I then expected him to go and get the furniture pads. He didn't. In fact he didn't even mention them. I asked him about the pads and he acted like he had never even hear

If the customer does not speak Spanish, do not send them to this location. The associates speak to each other in their language while in your presence. Also they make mistakes that inconveniences the customer and then say they didn't understand or its not their concern. I will never go back to this location again and I will tell any and everyone I know my interaction with this location.

It was fine not busy and crowded like some uhaul pickup locations.

Train the contact in this location.He has very poor customer skills. He even threathened me(customer)

Location needs to appropriately and honestly log trucks back into the U-haul system when they have been returned. We returned a truck the night before it was due @9PM on 1/3. This should have provided the location enough time to log the truck when they opened, but the truck was not logged until 10:30AM the next day on 1/4 and charged the extra day to my card. Did not appreciate this at all. If this is not resolved honestly, will not ever rent from Uhaul again.