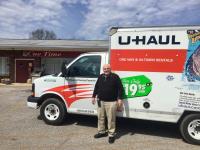 The check out service and place was nasty and smelled bad

The pick up location was a mess inside, and the customer service person pushed his handouts and copied disks on you about silver and additives. Just kind of strange. Although he was very nice.

Owner overcharged me for mileage I did not put on vehicle. He never got in the truck to check mileage, he went by the computer. When I tried to show proof of this, he laughed in my face did not want to see it and said well maybe u should've not been out joy riding. I took very much offense to that cause I'm a honest person. I will never rent from this location again or send anyone there.

Maybe I missed it, but a sign indicating when the owner will be back would be great. We thought they were closed when we returned truck and trailer but he came back as we were getting ready to drop the key in the box. Great guy though. Very helpful and friendly

Stay the way it is, no complaints

Such a sweet man that owns this place. Loved chatting with him. Made our long exhausting weekend of moving a little better just taking with him. Very helpful and truly cares for people.

The truck ran like crap! Didn't hardly want to pull!!! I had to turn it in in another state besides where I was supposed to because I didn't want it to break down on the way back to bama!

Nothing it was a great and professional experience.

Mr. Donda is most gracious and helpful! We will be repeat customers!

Store is extremely cluttered, truck had broken cup holder laying in floor,and air conditioner went out about 50 miles in trip and came back on after about 100 miles left in trip. Dont know if freon was low or what but 8t would kick on then off..please creadit my account accordingly..

I was able to rent a truck, but I had to drive out of the way because the location I reserved a truck for rented my truck right before I picked it up. I was disappointed with the customer service of that location. I may not rent from uhail again.

The truck engine runs rough with slight transmission issues. In my opinion the truck is only good for local moves and not good for the distance I used. In other words, I would have appreciated a better running truck and would have traveled further for a truck with less miles on it. I went on the web looking for a dealer with more than a few reviews and found one in Oxford with over a thousand. This told me they were more than a cafe with a truck or two. However, no one answered at that location. Instead I was transferred to a coordinator?? and ended up with a questionable location just because it was closer by a mile or two to my location. I would rather have been told a little more about the dealer and would have gone to a larger operation. The sluggish truck almost got me hit at an intersection. I learned a valuable lesson about Uhaul (ask for more detail about the dealer and do not trust dispatch)

The internet experience was horrible spent 3 hours trying to check in my truck before I had to be given a different truck at a different location after my truck had already been changed without me knowing location or size of truck then the online check in was not setup properly and they got almost all of my information wrong and my move was delayed close to 3 hours due to the customer service negligence.

Right time to book reservation and went pick up and dropped off. No problem!!

first off I reserved my truck a month in advance, it said I could not pick up at the Jacksonville al location due to no truck available for that date, which I was fine with, said I would have to pick up at the Hamric Drive location in Oxford, AL, at 730 am on 6/17/18. I arrive at said location and first off the man there was very rude and then he tells me he does not have my truck and I was not suppose to pick up at Hamric, yet I had called and confirmed 2 days prior with them, and Hamric address is what my printout said as well, then he tells me I would have to pick up on HWY 202, which was totally out of my way, I arrive at 202 and they do not open until 8, which puts me behind in meeting my movers I hired for 5 hours only. After they finally open at 202 location, the old man was very nice and friendly, but his computer was messed up, so he procedes to get his laptop which takes forever to update and he had changed internet carriers since hed used it so he has to find the internet password and enter it, needless to say I don't get out of the uhaul place until around 845, as opposed to the 730 and the movers have already arrived at my house, and so it puts us way behind on moving and my 5 hours I paid for. It was an absolute nightmare as far as the uhaul company itself, my movers were awesome however, but Uhaul sux. This is the second time I have rented from uhaul and both times they have totally messed my reservation up, the only reason I rented from them again this time was due to the fact you could book your moving guys and all through them, that is the only reason I used them again this time. But I assure you I will NEVER use Uhaul again, it is ridiculous that a big major company like Uhaul cant get it together, and they have the nonchalant attitude that they don't care that they put you behind with everything you had scheduled. What if my moving guys had not have stayed passed their 5 hours and sent an extra guy to speed it along without charge? Uhaul could care less.. And then on top of that i put gas back in the truck when i turn it back in and they are gonna call me and claim it wasnt where it was when i picked it up, which was completely incorrect, and that they are going to charge my bank account even more, even though they put me an hour and half behind, but that is my money not theirs so they dont care about that but when it is their money its a whole different story.They are a poor excuse honestly for a company. Ive used Penske in the past and NEVER have I had the kind of issues I have had with Uhaul, the only good thing Uhaul has going for them is the fact you can book movers and truck all together at once. Sincerely, Get it Together Uhaul!! #UhualSux

The store manager was particularly helpful as this was my first time renting a trailer to tow.

Reserved an appliance dolly. When I picked up everything I was told all that was available was a regular dolly. This was an inconvenience in moving.

Me. Donda gave exceptional customer service. He was very pleasant and easy to work with. He made the experience renting from Uhaul very seemless. I will use this location if I rent from Uhaul again. The best hands down. Thank you !

Very nice owner! Very accommodating and easy to do business with! Has storage units and very accessible to Interstate

very smooth transaction ,very friendly. I would recommend this business over others in the area..

I would have preferred to use the Oxford location.

My overall experience was great!

Good service and equipment at at good rate.

The man that waited on me was verry nice and helpful. I will rent from him again, Thank you,Peter

I think mileage charge of $.99 is a little steep.

I can't think of anything that can be better. Emile was kind, friendly, and very professional. I was treated like I've known him for years, I do, but he didn't know that. If you need a truck, call Emile!

Less wait time. My ending price was above my expected expense. I got the $29.95 in town price, and ended up paying $76. I only drove 18 miles! Also the sticker in the rear said if I swept the truck I'd get $25 back. That was never mentioned. All in all, I was happy to get moved in one day!

Very fast rental. Made our move so much easier. Mr. Donda was very helpful and informative.

Fix computer system. My trailer did not get the system and I had to go to another city to get my trailer.

The truck was great. New truck and drove better than most cars.

I would not recommend U Haul to anybody!! My original reservation was suppose to be in Pell City, AL and was suppose to be have been a 20 ft truck ready for me to pick up by 9:00 a.m. ONLY to discover the reservation had been switched to Talladega, AL and the owner would NOT have a truck available for me until 3:00 that afternoon. Called the 800 number, reservation was switched to Oxford, ONLY to discover after driving to Oxford, that the location was in Coldwater, instead. Drove to Coldwater to pick up the truck, and THEN had to drive BACK to Oxford to pick up the two utility dolly's that I had also reserved because the location in Coldwater didn't have the dolly's. My friend that was driving the truck for me, was suppose to have been at work at 2:00 that afternoon, but had to call in because of the run around from U Haul. NEVER again!! NEVER!! The customer rep was suppose to text me the correct address to this location, but I never received a text!! The wait time for a customer service rep was extremely long!!

The Saleman was kind, friendly and helpful

Those u-Haul site was horrible !!...first my reservations was cancelled ...then I received someone else's email bill for a rental that had my lady name...then...when I went to pick the truck up the site was a building that had sooo much junk in it...very bad experience ...

I was jacked by the pick up location. And i was charged $200 more than the reservation. I want a refund and will be calling the national number for follow up. This location should be closed. The turn in location was great.

none I can think of

THe original location I was to use was J &S or J&R in LIncoln. No one was there and the building was vacant. There were trailers but no one to help. I called the number provided in the text and the lady was very helpful in locating another trailer for our needs. The man at the new place was very nice and efficient, however, he operates it from his junk shop. Seriously!

I drove the truck 72.3 miles, keeping it within the green and OD engaged. At fill up required 11.553 gal. which calculates to about 6miles/gal. When I asked the mgr about the high fuel usage he said it probable needed a check up, that the normal usage was 10 miles/gal. Is this the norm?

Needed one tire changed, was partially slick on the inside. Not good for hauling a load.u-rep at where I turned it in said he would take care of it

You'll should not advertise that you have VARIOUS locations to choose from for pick up only to learn, AFTER THE FACT, that only 2 locations are available on certain days. In addition to that, those locations are wayyyy out of the direction of which i was going PLUS you'll are charging mileage for those ADDITIONAL MILES I'm having to travel back to my starting point and then mileage to return the truck!!!!! That doesn't seem like an ethical and Fair practice to me!!!!!