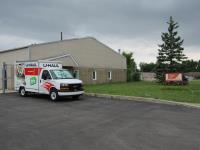 The door was left open and there was a bunch of snow inside the trailer.

Nothing against these folks, but I was sent forty minutes north from the apartment I was moving items from to pick up the truck at this facility. Then, I had to drive to another facility twenty minutes closer to the apartment to pick up the auto transport. Then, I had to drive back to the first facility twenty minutes away to load my vehicle. In addition, I had scheduled a pick up at 5pm on Friday. The email notices told me pick up was scheduled for 5pm on Friday. Had I not decided to Google directions to the facility, I would not have discovered that this facility closes at 2pm on Fridays. After confirming that fact with the facility, I had to rearrange my schedule to pick up the truck prior to 2pm. I would otherwise have arrived at 5pm to find my truck parked behind a tall chain-link fence, inaccessible to me until the next morning, which was unacceptable because I had such a small window of time to pack and move my daughter to another state over the three-day weekend. I was advised that an enormous number of people were in need of U-Hauls over that particular weekend, which made equipment scarce and that I was fortunate to have made my reservations early because others had tried a few days prior and there was no equipment available in the area, so I sucked it up and have said nothing. But, you asked, so I'm telling.

I had reserved a truck 3 weeks prior to my move with another location. When I checked in they did not have a truck for me not where there any around. Fortunately, Chicagoland had what I needed and made sure I was taken care of. They made a very stressful situation much easier. Thanks Chicagoland!

This location is more a towing service and is not appropriate for women or children. The smoke inside the building from cigarettes was stifling and it was difficult to breathe. Additionally, I originally went to another location that was much cleaner to rent the truck. I was quoted a price of $1187.00 for a round trip. After going home to discuss this with my wife, I returned and was told that for a One-way rental I had to go on line. The price was over $1500. and required me to rent for four days when I only needed it for two. I believe I should receive a credit for at least $400 since I returned the truck in two days. Poor customer service is when a customer receives one quote and is then up-charged, as I was

Everything was great but I feel like the mileage that they charge for was not accurate.

The location was closed on Sunday.

The Round Lake location gave us no problems the Grayslake location however has rude employees who give you attitude for asking questions!

Wasted 4 hours trying to pick my scheduled truck from this location, dozens of calls to customer service, one of the customer service people tried to blame for their own mistake, started to be rude when i asked about the $50 equipment guarantee, and then hung up on me when I asked for her name. Moving is stressful enough as it is, but not having you equipment ready at the agreed time and then wasting 4 hours talking to incompetent customer service representatives made it frustrating.

This was not my preferred pick up location and no one from U-haul contacted me to tell me this is where I had to pick up my rental. Also it was not stated that there was a certain amount of mileage I had available before I was going to be charged.

Trying to figure out why I was overcharged for 2 days when it was a 1 day rental. Vehicle was very dirty inside with pop spills all on the interior. Only a 1/4 tank of gas at pickup. Good thing I was local.

Horrible experience...truck wasnt where it was suppose to be had to go south to get one with broken windshield got chrged extra miles and was screamed at when i dropped it off...never again!

I was to pick up at 4 pm. They closed at 2 pm on Friday so I had to rearrange my schedule. Snow was not cleared off vehicle window. Hard to get ahold of HXL since their voice mail was consistently full.

Hard to id as uhaul

When I arrived st my pick up location, I was told that this was just my preferred location and that I had to go to another location to get my rental. But according to the notice you sent me I was at the designated location. I am very unhappy with this snafu and will find it difficult to use UHaul in the future.

Keep doing what you are doing

They were the nicest people to work with. They were very knowledgeable. I will definitely use them again.

Cargo space was dirty - lots of leaves and dirt; there was a McDonald's food back with garbage in the drivers cabin

Not much because the local rep was very pleasant and professional as well.

Nothing. It was a perfect transaction from beginning to the end. Easy pick up a d drop off. Staff was polite as well

Easy after hours drop off, area is clean but very small and kind of spooky in an industrial area. Overall fine as we got the truck dropped off