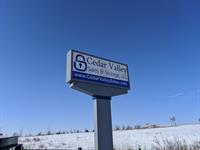 Great facility and service. Convenient on off site next to four lane highway and next to a gas station for easy turn Ins.

Experience was perfect. The pickup location was a new facility, easily accessible. The truck had just 8200 miles in the odometer. All this was reassuring to a first time UHaul customer like me.

In the middle of April, I reserved a U-Haul 26â€ truck, this was 2 weeks before I needed it, they told me I may have to go to another city to pick it up. This was do to the fact I was going from Clear lake Iowa, which is small town in northern Iowa, to Blain MN. When they called me, they said I had to drive to Nashua Iowa to pick it up. That was 58.7 miles both ways plus having someone with me to drive my car back. When I got there I was under the impression that I would be paying $40 a day, I told them I may need the truck for 16 days, they said that's ok any days I didn't use would be refunded (again leaving me with the impression that I was paying $40 a day) so when I got charged $1000.88 I assumed I would be getting money back at the other end. So, when I returned the truck and got charged another $214, I question the agent later on the phone and he said that corporate world look at it and refund me the money in a couple of days. I wait all week and heard nothing from them so I called again. They told me it was a one-way contract and that I would have to pay for the days I had it, 1214.88 for five days. I am making what is the last move of my life because I'm 75 and wanted to get close to my family who all live in this area. I live on a fixed income and was doing it this way to save money. Boy do I feel ripped off!

I had trouble dropping the trailer on a Sunday morning because the web sight wasn't able to sense my location. I saw a man mowing grass on the property and after speaking with him I found out that he was the owner. He was very helpful and put my mind at ease when he said not to worry that he would take care of it first thing on Monday. I called Monday and he was a man of his word! Thank you Cedar Valley Sales and Storage for your help!

Very confusing. Directions took us to wrong place. No worker came to help to assist on where to park. Overall weird and uncomfortable