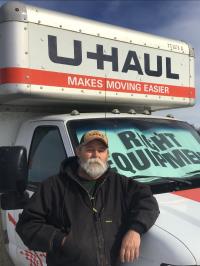 Tried renting at Nick's in Kahoka. They were going to charge $1.40 per mile plus daily fee. Even though website said $ .79. argued difference, showed web price. Then they backed up and said truck rented already. inform friends neighbors to stay away from Nick's. Drove extra distance and was promptly and courteously taken care of by Butches in Palmyra. Extra cost to me for miles, sad could not do business in Kahoka ( hometown) Stay away from Nick's, unless want to pay double rate. Crooks.

Thanks for your help, as well as letting me leave my car there while I took the truck out. Great service, and very friendly!

this unit leaked, half my stuff was wet, boxes soaked thru

I was told the truck would have a ramp and it did not !

The facility was not open when I wanted to pick up the truck, so I had to use the self-check-in, which was fine. Sadly, the appliance dolly and furniture blankets that I had reserved and even called to double confirm were NOT on the truck, so I had to send a family member back over later in the morning to pick up the dolly and a few blankets that Butch's had lying around. They did not have any new blankets for me to pick up. I was lucky they had the dolly because they said it wasn't on my reservation. That is not Butch's fault, and they went out of their way to make sure I had a dolly once I called, and they got the blankets leftover from another move and let me have those, which was all they could offer and definitely better than nothing. U-Haul failed me there, but Butch's did their best to remedy the situation. Without the dolly I would have been stranded and unable to do the move on the scheduled day, and then I would have been super disappointed. The truck I picked up had mud on the floor of the cab but the seats were clean-looking and the truck bed itself was clean, so that was what was important. Butch's is right next to a gas station, which makes fill-up at drop-off a breeze.