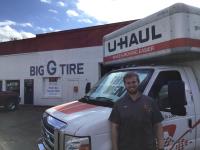 We dropped the Uhaul after hours on a Sunday. We left the truck and the keys. The location was excellent. Right in town.

These folks were so nice and friendly.

Really liked the convenience of using phone, pickup area was not ideal but it worked out!

First of all, the trucks are located across the TWO LANE HIGHWAY in a run down parking lot. Not at all at Big G Tire. Also, our reservation was scheduled for 7 am and it somehow changed to 8 am, without my consent or knowledge. Additionally, we could not get the code to the lockbox for the key because our reservation time was changed. We sat on hold for 40 minutes before being helped. 0/10 DO NOT RECOMMEND.

Fast and friendly. Will use again.

The pickup was good. The scheduling with the uhaul 800 number was ridiculous. Kept changing my pickup location and had me picking up at a location and returning to a location 5 miles further away and calling it a one way trip because of two different locations.

The truck was not cleaned or swept out when I picked it up. It also had an eighth of a tank of gas when I picked it up. When I dropped it off, I dropped it off in the same condition it was rented to me. With an 8th of tank of gas, and dirt in the back. Not to mention the truck I was renting was somehow double-booked and I was treated like it was my fault. It was terrible customer service. Then I got a charge for $67 claiming I did not clean the truck, that I went over on Miles, and that I did not return it at a fourth of a tank. I called and spoke to Uhaul and Big G tires, I was reimbursed for the gas as the gentleman remembered that it was at 1/8 a tank of gas and that he must have entered it in wrong, I was explained to about miles which was never explain to me in the first place and told that I would not get a refund for the cleaning fee. The only thing that I believe I should have had to pay for was going over on Miles, which still should have been explained to me. I have rented from U-Haul before, the gentleman walked out to the truck with me, asked me to point out anything that was wrong with it, and we inspected it together and went over the expectations. The place I rented from this time did not ask for my license, did not ask for my insurance and did not walk us out to the truck or explain anything to us. After spending so much money on gas and renting the truck in the first place to get fees added on, I will never rent from U-Haul again.

Service was great- but the car hauler is very old and needs to be replaced. Use this location as much as possible People very friendly. Thanks

The guy here at least seemed to care that I was played. He knew I'd never get a refund for the other stores poor customer communication so charged for me cleaning instead of moving the truck to the correct location and gave me a person to call though still no refund was given and instead a blame game was played.

Well you promised 10 pads and you had none. I didn't realize that you had w sizes of dollies and I got the small one when I could have used the larger. Other than that I always use u-haul.

This location was 50 mile roundtrip from where I was supposed to pick up a truck. The overall process was brutal.

Great service. No wait. They had everything ready to go.

They were fantastic, very helpful and friendly.

Equipment was inadequate and broke in mid commute to destination. Accident included damage to back of motorhome as trailer hit during braking. Dirt bikes and and other items inside trailer was damaged. My family 2 women and 2 young children was left stranded for hours at a gas station in a not so nice location for hours before repair company showed. Repair was that was given was absolutely horrendous and put family in fear for safety. Repair was used with zip ties and a temporary hose clamp. after arriving at destination U-haul said we had to travel an hour away to get new trailer. Arrived at distant U hual to find they were unaware and not notified we were there to exchange trailer. Took Local U haul about an hour to finally get through to a representative from main location. Was finally able to do exchange. Had to travel another hour back to main location. This cost money to drive motorhome at 7 mpg each way. Added extra money in gas and miles. Also had to stay night in Walmart parking lot. Finally reached the Walmart at 3 AM and parked. Had to run motor home generator all night to keep cool using propane and hours on usage. This cost over a day lost of family vacation not because of incident but because how the incident was handled. By the time we arrived at camping resort we stuck in the mist or a torrential down poor, extreme winds, and sever weather warning. Rain was expected and planned but we should not have had to set up in these these conditions. The next day we were unable to fix a dirt bike and one of the boys was unable to ride for the weekend. These bike were all tested as usual before leaving home and loading in to trailer. All bikes initially ran strong before accident. Damages to other bikes occurred but were still able to run. One was hesitant and didn't run well as normal. These bikes were laid down for an extended amount of time during and after accident. Loss of gasoline over turning out of 5 gallon container and also leaking out of bikes. I can go on but this has cost my family their vacation, loss of money, time, aggravation, and equipment. Had to make insurance claim as well. Needless to say a horrible experience and disheartened that we did not receive timely help and safety of my family was not a priority!!! Will be seeking advisement of an attorney.

The bearings were so bad on the trailer that it was put into a work order when we returned it the tread was coming off in pieces off the tires I think u need someone that inspects the trailers to be doing a better job.

I rented this over the phone with the help of a customer service rep, (no idea of what I was doing), so I was relying on someone who worked in the business. explained to him what I was moving, went on their recommendation (not looking at any kind of sheet). the truck was needless to say to SMALL, this was a one-way rental so I was stuck renting another truck for the left over stuff which cost me an additional $100, instead of upgrading to a larger truck which would of been $20-30 which was not explained as an option for the cost difference. I called customer service and since it is just a "recommendation" there is nothing they will do expect be happy to rent me another truck for the left over stuff and take me for a "ride" very disappointed - will never rent from Uhaul again and as a new career in the real estate business I will not recommend my clients to Uhaul either. In fact I will be contacting the competitors just to have information to hand my clients in their welcome packets. (All customer service had to do was make an effort to make this right)

Location was very helpful and knowledgeable. They made sure equipment was checked out and fully functional.

It was sad that I had to clean up after the person who had the truck before me. The owner did not offer to look over the truck with me. There was a bottle of power steering fluid up on the dash. I had issues with the power steering, which I reported to the drop off place. I have used uhaul server all times and never had issues like this. I spent 180.00 to use this truck for close to 4 hours. I had issues with the truck and had to clean up after the last person who had it. I will probably never use uhaul again!!! This was really bad I spent that much money for such a poor experience...

First, this location was out of my way, not in the area that I had requested. Gary was nice, but the trailer was very banged up, with some trash inside, and several of the blankets had tape all over them when I unfolded them. Also, while Gary had me sign the form that said the trailer was in good condition - without taking me out to inspect it with him - the trailer actually had some damage that was concerning to me. Also, some damage that was not noted with the little "X" on it. In the end, the trailer worked and was satisfactory, but my image of UHaul is not good. Will not be recommending UHaul to any friends.

Nothing that I can think of. I was well pleased, with equipment and services.

My experience with UHaul was outstanding. Everyone was very helpful and courteous. Thanks.

Problem wasnt with pick up or drop off locations, it was with Uhual poor customer service with scheduling my truck. The traffic department for my region was a joke. First I was suppose to pick up in city I was moving from, then a different city, then that same city but a different size truck and 3 hour later time. Then the day I was supposed to move, the next day, they had me go to a totally different city than the other two 17 miles out of my way. No compensation for the hassle or extra drive time. Unsatisifed. I'ved used Uhual 3 (three) times now and will not again.

Signs for where to put trailors being dropped off.