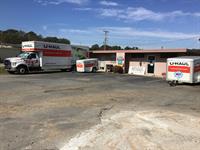 Checked in the truck myself, location was closed.

As of this experience we wouldn't change anything. Both pickup and drop off locations gave us excellent service. My husband says????

The air conditioning did not work in the truck. Drove over 6 hours in the truck. Would like to talk with someone about it. 972 832 6744

Mrs. Linda is a Doll

Didn't get the 26'truck that reserved and on top of that had to drive 62 miles one way to pick up . When I got there you had me a 20'ttlruck . Not big enough .had to rent another truck and make another trip . Costing me another $400. I will not do business with uhaul no matter what . Hope you can sleep tonight. Horrible. Worst service ever. You can't keep your word . Jd

Be available during business hours, and alert customers to changes in their reservation. I do appreciate the discounts and understanding from customer service, but driving 45 minutes out of my way unexpectedly after my reservation was not ready at my pick up time set me back a lot with moving, and the entire experience was incredibly stressful.

Truck was dirty when i received it. Left it that way because it was storming during my move. Got charged for it!

Keep doing exactly what you're doing. My wife and I just love the personality and customer service provided by Ms Linda Lewis.

Great experience and staff is superior!!! Will use for next move or services.

Clean up front of place and throw away the couch

Get a reliable and well stocked location in Greenville, MS. The equipment I reserved was not in Greenville as reserved. The company gave me zero notice, and I searched for a day before locating the needed equipment in Dumas, AR.

We arrived in Dumas around 1:00. No one was there. There were several numbers on the door so we started calling. We finally got someone to answer several hours later. The person on the line stated they were out of town in Monticello, AR. But on their back back to Dumas. About 2hrs later they showed up. It was 2 ladies. There was no one there to put the trailer on the car. So my friend & I went to the back with the lady. Friend finally figured out how to get it hooked up & we were on our merry way. We were there 4 hrs. totally. Lots of wasted time. Rest of trip was good.

This was a great experience! Highly recommended!

the truck I had rented was not road worthy; no functioning air conditioning, no cruise control, and the brakes nearly caught fire many miles from home.

Continue to be nice , helpful, and easy to approach!!

Best service I have ever received! That sweet lady goes out of her way to make sure that you are taken care of..

Great on this end of trip.

I had the right amount of gas in the tank, but yet they still wanted to charge me more money. I truly felt ripped off.

Did not have the right trailer we requested! Had to settle for one without a ramp.

when making an online reservation, uhaul did not communicate that to the business I preferred. Luckily I called to double check that I had a truck reserved. The business I reserved under did not have the request I had placed a couple of days earlier. They did call and find a truck in another nearby town. The local businesses took care of me, but had I not called them, and solely depended on the online reservation, I wouldn't have had a truck on moving day.

Uhaul people in Dumas, Ar was Awesome! I would give them 10 stars while the Sherwood Uhaul would get zero stars!!!!

My husband loved the lady at drop off

The lady was super nice and generous.

The representative at this location was very helpful. I would certainly recommend this place to everyone!!!! Very helpful & friendly!!!

The independent U-haul dealer did not return my phone call that I left during business hours 2 days BEFORE my scheduled reservation or bother to notify me that the shop would be closed. I was shocked when I pulled up to a locked building with a sign up telling me to call U-haul 1-800#. Then it took almost 40 min. to finally get a rental. And the dolly wasn't even in the truck. Very upset!!! I will never use this location again. That is bad business. Period. The customer's time is just as valuable as yours.

I was charged for insurance and moving pads and didn't ask for it. Rate was suppose to be $169.00 I was charged $225.00 so never again this is my first and last time.

I made the reservation by phone with a U-haul representative the night before I needed it,and when i went to Ashley's Treasures in Dumas,Ar to pick it up, the poor woman working there stated she was working for the owner and had no idea about what to do,that she was never told.I actually spoke with a woman by phone(u-haul representative)and gave her my information and credit card number,I never signed a contract,the representative told me that she e-mailed me the contract and i told her i had no computer access and she said i didn't need it,that it was just for my records.The poor woman then had no clue where the keys were and called the owner to ask,was given the keys and had to look over the truck myself for damages and to check mileage and talk to the representative to give that info.It was a nightmare and I will never rent a U-haul again,and to top it all off when i went to turn it in at a 24hr.drop box,i needed the contract to return with the keys,i didn't have it,so i had to write a letter and call the place to make sure everything was ok the next morning, and although i turned the U-haul in on a Friday night,i still got a phone call Sat and Sun from different places asking me when i was going to return it!!!!Obviously i was supposed to turn it in a particular place but wasn't aware of that either.