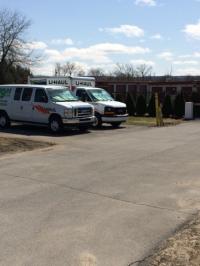 I used a debit card for my checking account and it appears my account was double charged. I've left messages at place of pickup since no one answers during there normal business hours to inquire about this and no one has returned my call. I also called Uhaul 800 customer service twice and have had wait times of over minutes and still have not spoken with anyone. Terrible customer service in this regard.

The only issue we had was it doesn't' open until 10:00am, so plan accordingly if you want to start out earlier.

The Key drop off system came in very handy. I arrived early, locked the truck, put my contract on the dash and dropped the key in the box. Very convenient , thanks.

I was unhappy that my location for pickup was changed especially since I needed to pick up the truck in the evening and the location assigned did not have evening hours. I think you should add to your online reservation page a way to add what time you need to pickup the equipment to avoid these problems. Luckily I was able to make it work but I would have preferred if I was able to pick the equipment up in the evening.

Was only there after hours. When I called the next day the lady seemed very nice and answered any questions I might have had.

The only thing I would like to see would be better security. The staff there are awesome. Yes I would recommend thi a place for truck rental, but not for storage. Thank again.

regarding the dropoff location. When we arrived to the Marcy 13403 location to turn in the truck, the personnel said the information of us dropping off the truck in Marcy wasn't correct. The only proof we had that 13403 was where we were suppose to drop off was the signed document where we picked up. There was a lot of confusion.

It was very hard to find. The sing was the size of a Credit card. And they didn't know that we were coming with the truck. Better communications between the two places needs to improve. Other wise great working with U haul.

Drop off process was fast and smooth

Everything was as specified. No issues to note.

I am been over charged 2 times. First was a charge of 471.17 for a one day rental that was approximately 30-40 miles. then an additional charge of 70 dollars on top of a charge of 104. dollars. This has a been a major inconvenience of calling and waiting for credits. Now I have to call again because of being charged 104 dollars and 70.00 dollars for the same rental.

I reserved a trailer 2 weeks in advance. I changed the date the following week to an earlier date. The rep said no problem. The night before I was to pick it up I got a call that the trailer would have to be pucked up 25miles away. I had no choice. I couldn't get there till 1:30 pm. My paid help had to wait 4 hours to load it. This was Friday. I had to return the trailer 18 miles from my house on Sun. They close early on Sun. I returned the trailer on Sun. It was about 6 hours late. I got a call the next day from a very rude female yelling at me that there was a big problem. I had to get back there right then to pay an extra 20.00 for being a few hours late. They were closed and it wasn't going out that day. I explained that I was 220 miles away and wouldn't be back till the end of the week. She insisted I use a credit card. I told her I don't give that information on the phone. And said I would be in as soon as I got back. She was still yelling and. Hung up on her.

I wish I could have picked up the truck at my nearest UHaul location rather than being told on short notice I had to go elsewhere.

Both girls were very nice and professional...square dealing.

This rental reservation was made on 7/9/14 . . . so a month prior to the desired date. The reservation was made for a pick up time of 10:00 AM at either a location in Clinton, NY or an alternate location in Utica, NY. The afternoon prior to the pick up date (8/8/14) I received a text message at 1:46 PM indicating that the pick up time had been moved to 12:00 (noon), and that the location had been moved as well (to a location in Marcy, NY). At 2:25 PM that same day, I received an e-mail indicating that the reservation had been changed outlining the above. However, then I got a second e-mail at 2:40 PM stating that the reservation was at 10:00 AM (as was originally the plan), and the only change noted was in the pick up location. We ended up calling U-Haul and determined that the pick up time had in fact been moved by two hours to 12:00 (noon) and the place had been moved due to truck availability. I had 7 people prepared to travel 3 hours to complete my move, and there was now a tow hour delay in that process . . . do to changes made by u-haul. We were told that the best you could do was to move the pick up time to 11:00 AM due to the fact that the truck was not scheduled to be returned until 10:26 Saturday AM. In addition to that, there was only 144 miles allotted for the trip, and it is 153-171 mile trip depending on the route taken. Your staff was able to add additional miles to the contract. My bottom line complaint is that making a reservation more than 30 days in advance really did nothing more for me than ensure a truck. I did not get the truck at the time I wanted it or at either of the places I wanted to pick it up. I do not appreciate the fact that my move (that is stressful enough) was delayed by two hours (especially give that we had a total of 6 hours of drive time round trip). We could have had the truck loaded in the 2 hours that I we had to wait for the truck. In addition, the multiple communications about the reservation were not consistent. U-haul made a very stressful time . . . 10 times worse. I assure you . . . when I need to move my belongings again in the next 3-4 months . . . I will NOT be using u-haul to do so.

Alexa Grafmueller was excellent. Alexa is a shining star of customer service. She helped another customer and me getting a vehicle after both of us had HORRIBLE SERVICE EXPERIENCE FROM the Lomond Pl, Utica, NY store's manager. There were two employees facing the customer at Lomond and the white one act as the OWNER/MANAGER was so horrific at customer service that I am going to write a letter to Uhaul corporate about his BAD customer service.

I need not get the best rate

They are very friendly and helpful at this location. Great customer service!

Nothing was really satisifed.

i left one item on the truck, all the way in the back, its a sign, if u can find it can you mail back asap. thank you

We accidentally forgot to fill up the truck when we returned it due to all of the confusion.